As vaccines give us hope for the end of pandemic lockdown, restaurants look at ways to retain outdoor dining options

Image via City of Orlando & Community Redevelopment Agency Artist's concept of a reimagined, pedestrian-friendly Magnolia Avenue in downtown Orlando. It features many of the characteristics used in the Thornton Park parklets.

There's been plenty of talk of the "new normal" in the wake of the coronavirus pandemic, but much of the focus has been on sanitation and an embrace of at-home entertainment. When people do leave their homes, they're often looking for a quick bite out, and right now, that may mean literally "out," as in sitting outdoors.

With concerns over indoor air quality, al fresco dining has quickly become one of the silver linings of the past year (particularly for us here in balmy Florida). Now, as vaccines start to give some hope of an end to the health crisis, many restaurants are looking at ways to keep these in-demand dining options.

Orlando is working to keep curbside dining around a bit longer, and one local design firm is helping restaurants navigate the web of government red tape required to reclaim the street.

Prior to the pandemic, outdoor dining was a rarity in the United States (contrary to the number of charming streetside cafes you might see on Instagram). In 2019, between August and November, when some of the most ideal weather for outdoor dining occurs, reservation platform OpenTable says fewer than 1 percent of seating groups at restaurants sat outside. Last year during the same period, that number jumped to 12 percent. Even places like Cracker Barrel have gotten in on the trend — the Southern-style restaurant known for their folksy schtick replaced some of those front-porch rocking chairs with outdoor dining tables.

In July, OpenTable performed a survey of more than 3,000 diners on their feelings about eating out. When reflecting on the risks associated with COVID-19, 51 percent of diners considered outdoor dining "low to somewhat low risk," compared to just 19 percent who said the same thing about indoor dining. *

In December 2020, marketing company Constant Contact released a report they dubbed "The Great Recalibration." Among other data, they found that outdoor dining and curbside or in-store pickup were the most popular moves businesses made in 2020, and consumers now expect them to become standard practice. *[In a previous version of this story, data from the OpenTable survey was erroneously attributed to the Constant Contact report. We regret the error.]


In Central Florida before the pandemic, as in many places across the country, outdoor dining was mostly a luxury experience reserved for places like Winter Park's Park Avenue or at lakeshore restaurants. But after last spring's closures, many restaurants moved dining tables outside when they began to consider reopening, and city/county regulators were OK with it for health and safety reasons. Those temporary options proved to be popular, and now more long-term efforts are underway.

Meanwhile, the move to replace on-street parking with better uses of the space has been happening for years. In 2005, the first "PARKlet" was unveiled in San Francisco.

The pop-up park replaced a single parking space and lasted just one day. The idea quickly spread, and soon PARKing Day became an annual tradition in cities across the globe, including in Orlando. Here the annual event occurs each September, when various groups sponsor parking spaces that they reimagine as something else. From putt-putt golf to veggie gardens, the parking spaces show how street space can be used as something that benefits far more than a single vehicle user.

There's also been talk of more permanent outdoor options in places like downtown Orlando where proposals to pedestrianize certain streets or lanes, such as along Magnolia Avenue, have been discussed for years, though few of those initiatives have moved forward. The only major permanent retrofit of vehicle space for pedestrian use in the downtown area is the Under-I urban park, to be located in the former parking lot underneath I-4.

While the term "parklet" typically means a temporary park-like use for a parking space, more recently, it has been utilized to help describe the outdoor dining many restaurants are now turning to. Orlando has allowed restaurants and retailers with on-site parking lots to use some of that space for non-parking uses since May. The City approved similar measures in August for on-street parking. 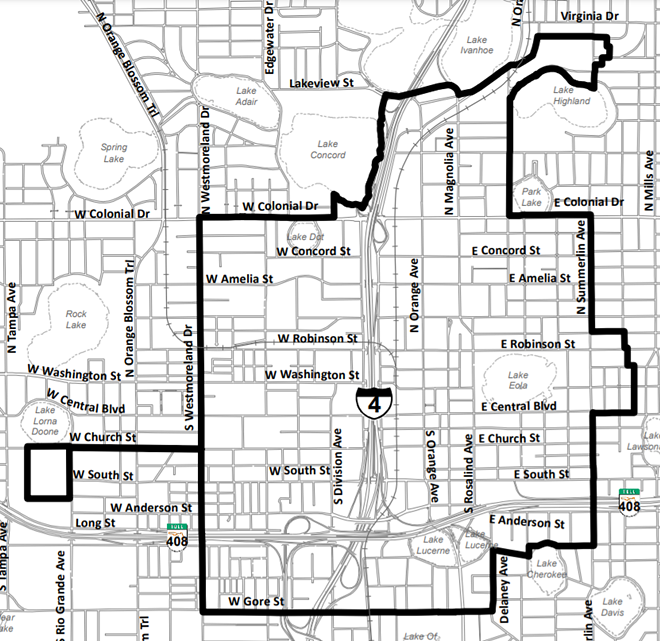 In Thornton Park, city of Orlando spokeswoman Samantha Holsten says, there are five permitted on-street dining areas: in front of Cavo's Bar and Kitchen, Island Time, Sperry Deli and Creamery and the Falcon Bar and Gallery, plus one between Mason Jar Provisions and Burton's Thornton Park.

For now, the parklet program remains a temporary one related to COVID-19. But the program was set to expire in February, and it has since been extended until at least Aug. 1. Mirroring what has become common around the nation, outdoor dining in Orlando might stick around in some fashion well past August. New York City has already committed to keeping its outdoor dining program around for "generations to come."

As is typical with municipal permitting, the requirements and language used by the city can be a hurdle to some business owners who might be interested in the program. NAK Design Strategies, which has an office in Orlando, has synthesized the city regulations, best practices and other useful information into a "Parklet Manual" for businesses. The 15-page manual uses visuals to explain the city's requirements, provides a basic budget, and even gives tips on where restaurants can find the approved furniture referenced in the guide. This isn't the first guide of this type that NAK has created; in 2015, they published a Street Tree Manual for Ottawa, Canada, where another of the four NAK offices is located.

The trend of private sector design studios helping translate often cumbersome government regulations into easier-to-understand manuals is common in many larger cities — groups like StreetSense, Kounkuey Design Initiative and WXY frequently help local business or community leaders . In fact, the first parklet was initiated by one such firm, REBAR, which is known for its guerrilla-style community-first urban projects.

As restaurants struggle to stay afloat during the ongoing pandemic and its related economic slowdown, parklets may prove beneficial, with NAK showing that for around $3,000, a restaurant can create a space that would provide $750 per day of additional revenue.

So far in Orlando, the parklet program is only available to restaurants and retailers in the downtown community redevelopment area, which means hundreds of struggling restaurants aren't eligible. The program is also limited to streets with a speed limit of 25 mph or lower. Florida Department of Transportation-maintained roads, such as Edgewater Drive in College Park or Orange Avenue, face their own struggles with FDOT having final say on many activities or updates to those streets.

One in six restaurants in the nation has already closed, and some estimates put the final number closer to one in three that will be forced to shut down before things improve. Orlando has given restaurants an opportunity to help ensure that doesn't happen, as long as you're one of the permitted few.