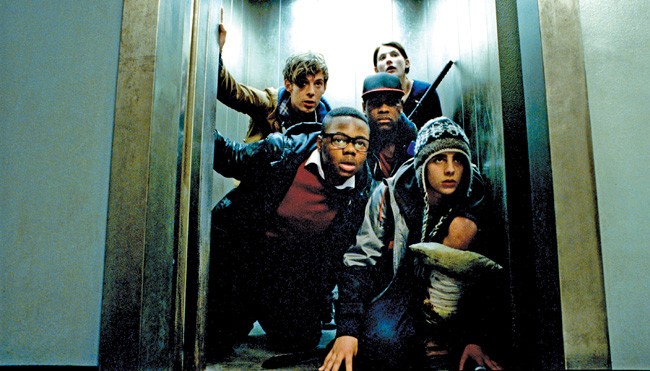 Prior to its world premiere at SXSW last March, writer-director Joe Cornish took the stage and referred to his Attack the Block as “Super 8 Mile,” And sure enough, that description hits the nail right on the head.

During Bonfire Night (Nov. 5 in England) fireworks, nobody notices an alien invasion occurring in the Brixton projects, except for the kids that nobody notices, anyway. The thugs, led by Moses (John Boyega), are in mid-mugging when an extraterrestrial crash-lands on the very same street, allowing hapless nurse Sam (Jodie Whittaker) to flee while the troublemakers decide to torment a new species for a change. However, bringing their freaky trophy back home invites violent retaliation, forcing Sam to join the ranks of her own attackers in fighting back.

Cornish has fashioned an impressively energetic directorial debut, bolstered further by his own remarkably efficient screenplay. The hoodlums’ casual chemistry (all of them played by unknowns) goes a long way toward making these initially reprehensible protagonists worth rooting for. Boyega, in particular, has a great leading-man sense about him.

When the slang isn’t flying and the blood isn’t gushing, Cornish eases into a social commentary – sometimes subtle, occasionally overt – about class conflict, passing judgments based on appearance and violence begetting violence. But that makes it sound preachier than it is; they’re simply trying to protect their homes and each other, and while their initial mugging is never presented as justifiable, it comes from a feasible place of misplaced bravado.