Do you understand the words that are coming out of Yip-Yip's mouths? 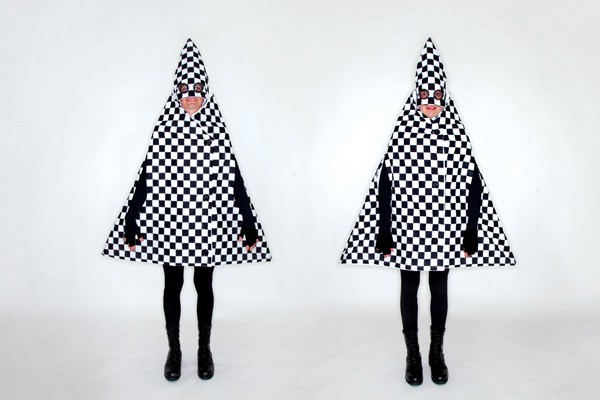 Experimental electronic duo Yip-Yip is already etched in history as one of Orlando’s true underground standouts. But after a decade of groundbreaking freakiness, the diverging paths of their personal lives (school, marriage, etc.) make their forecast as a band opaque. However, even on the eve of uncertainty, the checkerboarded twins-in-spirit have thrown the doors wide open.

Their 2008 album (Two Kings of the Same Kingdom) introduced organic elements like horns, organ, cymbals and gong into their synthetic playground, and that was huge. But Bone Up is resolutely their most expansive work yet with actual vocals. If you already know how tightly defined the closet-world that Yip-Yip has carved for itself is, then you know how seismic this shift is for them. Although the tones are highly processed and the singing style is more like pitch modulation than actual melody, the robotic vocals give their music a major boost in memorability.

Turns out Yip-Yip aren’t just a couple of jovially mischievous left-fielders. Besides underscoring their dramatic new direction by being listed inside the album cover as an unbroken torrent of words, the lyrics reveal themes of social, personal and creative disenchantment. But the relatively human addition results in some of their catchiest, most relatable songs ever.

Standouts like “Over It,” “Dead End” and “Apes Ahoy” provide nice glimpses of broader synth-pop horizons. Although it’s astounding even to be discussing the notion of a vocal chorus in a Yip-Yip song, the one in “Copy Cat” is completely mental and dia- bolically infectious, while the one in the crunked-up title track bounces like Super Mario Kart on hydraulics.

The integration of vocals was a drastic, admittedly difficult midstream shift for them, occurring after half the album was already written; it took more than a year to get the sound and lyrics to their liking. But even though they’re entering their cloudiest chapter yet, they had the guts to gun for the next level and, in so doing, deliver their most ambitious work to date.