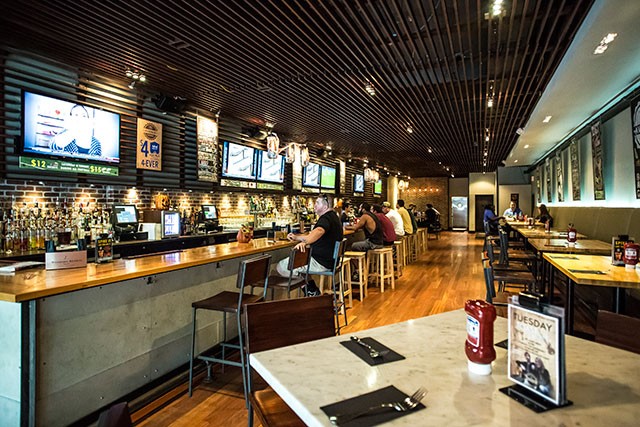 Glorified burger-and-sandwich joint, or legit gathering ground for gastronomes? That’s the question we pondered prior to entering Avenue Gastrobar, located in the former Senso Supper Club/Zinc Bar space in the heart of downtown Orlando. After all, many bars have pounced on the gastropub trend, only to offer the usual culinary suspects at unusually high prices.

Dodging through hordes of after-work imbibers on our way in, we made contact with a very sweet waitress who, observing how nonplussed we were by the throng, escorted us down the length of the crowded narrow room like a soldier leading a charge. The clearing she led us to was noticeably less raucous, and it was here, seated at a table on the tail end of a long banquette, that we took our time scouring the menu – which was, you guessed it, heavy on burgers and sandwiches.

Granted, there are a host of comfort staples too. When a menu lists items like Mornay sauce, “house-made” pork belly and choucroute, hopes are inevitably raised. Throw in their rotating selection of craft beers, and we started to believe that this gastrobar was dedicated to engaging the exacting epicurean, not just the booze-guzzling boor.

Indeed, the casserole of thick mac & cheese ($8), served on a bamboo cutting board, was an umami-laden blast thanks to a wondrous medley of mushrooms. Paired with a glass of Dragonhosen Imperial Oktoberfest ($6), the mac & cheese was just the sort of start we’d hoped for. Then came tater tots ($6) “loaded” with scallions, pork belly and that Mornay sauce (béchamel with three cheeses), which all parties at the table heartily gobbled down. (For dipping fiends, a side of chipotle aioli is also served.) Things were looking up but, ultimately, the caliber of the mains would make or break our faith in this kitchen.

First up: chicken and waffles ($9). The fluffy pumpkin-spiced cake came topped with two overly panko-crusted breasts that were just a bit too dry. The accompanying “maple-bacon drizzle” amounted to Aunt Jemima goop with bacon bits; I guess using 100 percent maple syrup is too much to ask. We weren’t all that impressed with the chicken pot pie ($7) either. While the flaky crust was great, the lackluster pottage of peas, green beans, carrots, corn and chicken just fell flat. Also failing to wow was the choucroute ($9), a plate comprising smoky cuts of kielbasa and bratwurst over sauerkraut and potatoes. The fact that the sausage didn’t snap bugged us, though the sour cabbage did provoke our palates.

The “Rebel” ($9) was certainly one of AG’s better mains, with a tasty cheese blend stuffed inside the Angus beef burger. The cheese oozed after one bite, but the brioche bun showed signs of disintegration after five. Still, this was a decent burger that was cooked to the desired medium.

Desserts were also desired, but the dry brownie ($5) covered in a too-sweet toasted marshmallow sauce didn’t do the trick. If you must have a sweet ending, fried Oreos ($4) with a strawberry drizzle are a marginally better option.

One sure positive is the pricing – everything we sampled at Avenue Gastrobar was under $10, making it an attractive option for the after-work or pre-clubbing crowd. But price alone does not a good restaurant make; a little more focus and execution in the kitchen is needed. If they’re serious about attracting “fussy eaters and foodies alike,” raising the gastrobar is key.