Bach to the future

Classical music makes a comeback this February when the Bach Festival Society of Winter Park celebrates its 81st annual festival. Nearly 331 years after the birth of the festival's namesake, Johann Sebastian Bach, the historic Central Florida choir and orchestra presents a jam-packed series of large-scale symphonic productions, as well as intimate performances and free public master classes given by visiting soloists and small chamber ensembles.

Under the baton of artistic director and conductor John V. Sinclair, who also chairs the Rollins College music department, the festival is something of a hidden gem among the crown jewels of the greater Orlando art scene. Yet its global reputation and long history of masterful musical expression make it an annual must-hear occasion for patrons.

"Those familiar with us can expect great works, including the rarely performed iconic Beethoven 'Triple Concerto,' performed by one of the most celebrated piano trios of our time," says Zac Alfson, patron engagement manager for the festival, on behalf of Sinclair. 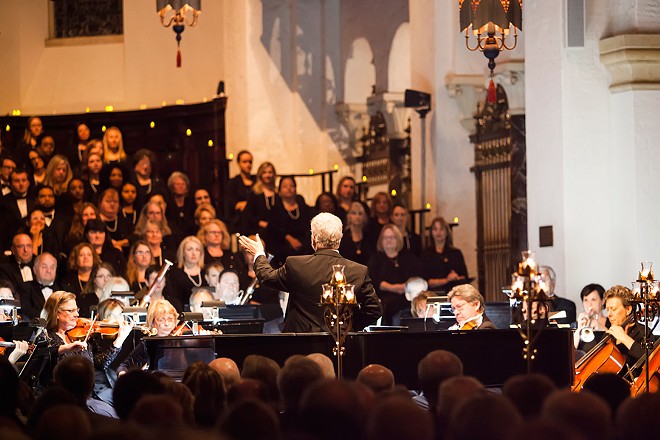 Sinclair kicks off the festival today by introducing the audience to the season in a public conversation at the Alfond Inn. Joined by Rollins College music professor Daniel Crozier, the two discuss the historic and academic context of the music over afternoon tea and scones.

Of special note this season, Alfson says, is the Concertos by Candlelight series. Soloists perform multiple times throughout the festival, allowing patrons to hear them in different settings playing different types of music. "New patrons will be immersed in sublime music in visually and acoustically beautiful spaces," he says. "We are working to bring our audiences closer to the music."

Interested guests also have the opportunity to learn firsthand from visiting artists during several free and open master classes held in Rollins College's Tiedtke Concert Hall and scheduled throughout the festival. The Kalichstein-Laredo-Robinson Trio (Feb. 18) and vocalists Richard Zeller (Feb. 23) and Laura Pudwell (Feb. 25) will share insight into their career and craft.

On Feb. 12 in the Knowles Memorial Chapel, organist Ken Cowan performs a solo recital featuring contemporary and classical works. Violinist Jaime Laredo and cellist Sharon Robinson share the Tiedtke stage together on Feb. 21. Tours of the Cornell Fine Arts Museum at Rollins College and of the contemporary art collection at the Alfond Inn are also planned, adding a touch of visual interest to the mix.

Alfson says the support for this year's festival is rolling in. Tickets for Bach's "St. Matthew Passion" (Feb. 28) are already sold out, and he says not many seats remain for Rossini's "Stabat Mater" (Feb. 27).

But something even those not musically inclined can enjoy is Cask & Larder's release of a limited-edition beer, Brandenburger Bock. The restaurant's brewmasters tap the keg starting at 11 a.m. on Saturday, Feb. 13, for Bach & Beer, a free event celebrating the composer's love of beer and the fact that he was once paid in beer.

For box office information and the full festival calendar, call 407-646-2182 or visit bachfestivalflorida.org.