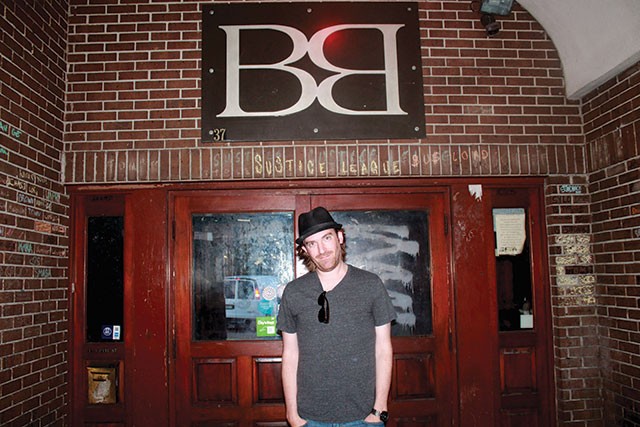 It’s a busy scene at Backbooth, no matter what night you drop in. The raised stage with its rustic wooden boards forms the backdrop for exciting recent bands like Off! and Torche, quirky party acts like Kitty Pryde and Lil Debbie, and tons of talented locals in between. People crowd at the lip or perch on barstools along the back wall. If you can’t handle the thick of the pit, there’s a crow’s nest lounge above the sound booth for a different perspective. Alongside the stage, there’s a confessional booth most often occupied by couples keeping busy in other ways.

On weekends, the place runs like clockwork. When midnight strikes, the band exits the stage and the venue transforms to welcome footloose folks for two of our city’s most beloved weekend dance nights, Footloose Fridays and Midnight Mass. It’s a changing of the guard, transitioning one scene into another, and after 10 years of practice, Backbooth seamlessly shifts its shades between live venue and dance club to become an impressive separate specimen: the downtown chameleon.

“The dance nights are fun, but our heart and soul is in live music and booking,” says Backbooth owner Aaron Wright, who this weekend celebrates his 10-year anniversary as the venue’s co-owner with his brother and partner, Adam. Owning the venue was a pipe dream, but as Aaron puts it, “I’d grown up in a lot of ways in Backbooth, so I’d always shown a strong interest in being a part of it someday, when that made sense.” That day came in June 2004.

The brothers had moved from New Orleans to Orlando while in high school, and Aaron found himself drawn to what was then a beatnik coffee shop called Java Jabbers. Aaron played the open mics and hung with friends at the rear of the place in a large circular booth. When he wanted friends to meet him, he’d always tell them, “I’ll be in the back booth.” That’s what everyone called it. So when Java Jabbers owner Matt Russell decided to convert the space into a wine and beer bar, that’s what he called it too: Backbooth.

In 2001, Backbooth moved to its current location on Pine Street downtown. Liquor poured and the shows went on under the capable hand of then-manager Andy Gurjian. It was a time when an informal jam session led by Eugene Snowden brought together talented musicians as the Joint Chiefs – which eventually went on to become big-wave-making local band the Legendary JC’s, who perform two full sets with a nine-piece lineup as part of this weekend’s anniversary festivities. That’s Friday night. On Saturday, the fun continues as Aaron booked equally notable but now seldom-seen local band Precious to headline.

“Precious is one of my all-time favorite bands – not just in Orlando – one of my all-time favorite bands ever,” Aaron says. “When I was younger, 18 or 19, I would go to every show. I was like a fanboy. And we became friends over the years. Before I even owned Backbooth, I was able to work with them and help put their second record out, so I have a long history with Precious. … I went to the reunion show they did at Will’s Pub. … Those three, they are magical when they’re together.”

Saturday night also features the Ludes, heavy rockers who release their debut album at last this year, and Panther Camp and Join Hands, mixing in current bands with scene pedigree with some of the owner’s longtime favorites to represent the persistent range of Orlando’s musical talents. All those bands have found a home at Backbooth, which even has a live album named for it with Seven Mary Three’s 2010 release, Backbooth, recorded at the venue.

“We’re celebrating me and my brother’s 10 years with these two shows, and they show a lot of history of Orlando music and also the diversity,” Aaron says. “Especially from the JC’s to Precious, you’re talking about two different worlds of music, and they’re both amazing.”

Aaron credits former talent buyer Chris Anderson, with whom he formed Parafora Presents to book bands at the beginning of his time at Backbooth, as well as current Backbooth talent buyer and Norse Korea promoter, Kyle Raker, for strengthening Backbooth’s legacy as one of Orlando’s best indie venues. He also considers the core community of venue owners at Independent Bar, the Social and Will’s Pub as vital mentors.

“Whatever success I’ve had, it’s always been cuz I’ve surrounded myself with the right people,” Aaron says. “There’s no way I’d be here 10 years later if I was on my own. No way.”