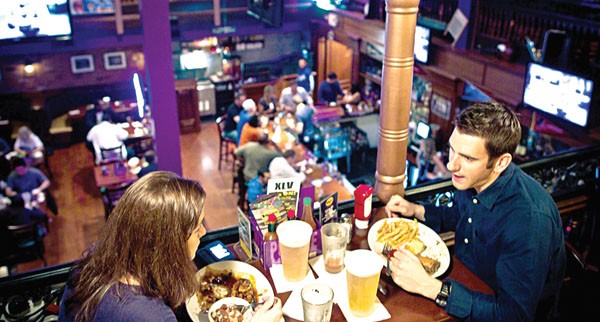 As downtown Orlando enters the post-Amway Center era, area businesses are counting on a little residual remuneration from the glass-and-steel monstrosity, and it appears as though Mojo Cajun Bar and Grill is one of the early beneficiaries. Before, during and after a basketball game, Magic fans congregate around the bar and create a scene reminiscent of a Bourbon Street binge (sans the fisticuffs, airborne baubles and ubiquitous chest-baring). The gathering spot seems to have all the prerequisites to laissez les bon temps rouler, along with decorative and architectural details characteristic of the Crescent City. The space on 129 W. Church St. has a bit of a legacy in this city as well; it once housed Rosie O'Grady's Good Time Emporium, a cornerstone of the old Church Street Station entertainment complex and, more recently, was home to the Orlando Improv before it relocated to Pointe Orlando.

I recall having an unremarkable meal while watching a remarkable performance by the late Robert Schimmel when it was the Improv; in many ways, our experience at Mojo was much the same, minus the remarkable performance by Robert Schimmel. Of the fried okra ($6.99), one dining comrade remarked, "It's a good delivery conveyance for the Cajun ranch sauce." The lifeless nuggets were soft and heavy, like a dirge performed by the Preservation Hall Jazz Band. Smoky oysters ($8.99) char-broiled with butter, garlic and herbs hit some high notes – that is, until the mess of romano and parmesan cheese killed the excitable and sensual essence of the bivalve. Bread, of course, is key to any good po'boy ($8.99), so biting into the flaky crust of the Louisiana baguette was pleasing, as was the fried catfish between the doughy loaves. What didn't please was "Mojo's special dressing" and its unusual flavor, which put off another one of my dining cohorts. When it came to concocting the jambalaya ($9.99), it appeared the kitchen had traded its mojo hand for a heavy hand. Even an accompanying square of dry, too-sweet cornbread couldn't neutralize the overly seasoned and overly spiced rice bowl. Apart from the half-melted cheese, the meaty muffaletta ($7.99) stacked with salami, ham, mozzarella and provolone was the favorite of the table. Granted, it's not big enough to feed an entire family, but it was filling enough for one, and the olive salad mixed into the sandwich was especially good.

Kudos to the kitchen for serving beignets ($1.99), the only dessert offered on the menu. The trio of hot fritters are served in a bag snowy with powdered sugar – inhaling the sugar dust into your lungs certainly evokes memories of Café du Monde. Coffee from the landmark NOLA tourist trap is also served, but only in drip form. If you're expecting café au lait (like I was), you'll find yourself pouring multiple creamers into your cup to compensate.

Food aside, Mojo's incontestable popularity is a testament to its friendly service, streetside lounge and live music. The bar-centric environment ensures Abita beer and hurricanes flow late into the night, and that the masses are kept loose and entertained. As a bar, Mojo Cajun has all the ingredients for success; but as a restaurant, this Big Easy eatery is a Little Hard to swallow.