Paul Giamatti proves too good for his crew in mismanaged showcase 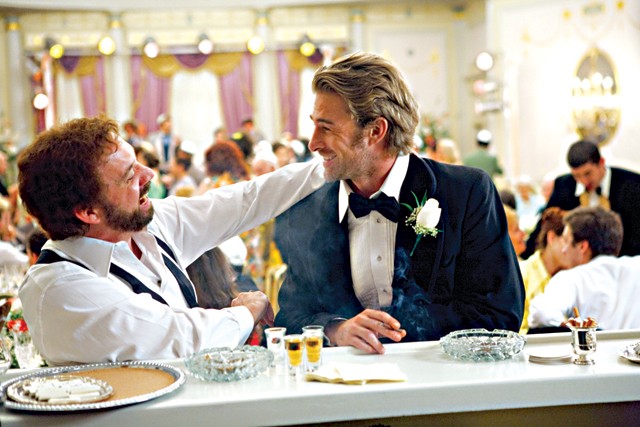 There is such an embarrassment of riches to enjoy in Barney's Version, the new film adaptation of author Mordecai Richler's much beloved (in Canada, at least) 1997 novel of the same name that it feels almost mean-spirited to detail its shortcomings. Then again, those shortcomings were so avoidable and baffling that to withhold criticism out of affection would be just as big a mistake as their ?very existence.

Barney Panofsky (Paul Giamatti) is a well-off producer of cheesy TV soaps. He's cranky, condescending and self-loathing, but he's also worldly, perceptive and charming in his own way. The film tells his life story, from his impetuous marriage to a tortured artist in Rome, where we're introduced to his similarly wracked artist friends, to his shaky second marriage to a "well-bred" Jewish princess (Minnie Driver), to finally, the love of his life, Miriam (Rosamund Pike), whom he meets and woos during his second wedding. This girl's the one, he tells his nebbish father (Dustin Hoffman, naturally), and he wins her over after a long courtship that borders on stalking. They raise two fine kids and live (almost) happily ever after - at least until Panofsky is stricken with Alzheimer's Disease.

This strain of the film's narrative is endearing and captivating to a fault: Giamatti is too interesting an actor to ever fully play unlikable, and while his Panofsky possesses an inner self-destruct button the size of Montreal, he's still a good father, son and husband, if tragically aloof. The film fleshes out his friendships nicely, especially the one with drug-addict author "Boogie," played by Scott Speedman, an actor so luminously handsome that any frame of film is instantly helped by his presence. And his loyal, loving relationship with his father -Giamatti and Hoffman may be the two most unlikely movie stars ever to grace the big screen and to see them together is a treat - is the film's greatest asset.

Why, then, do veteran TV director Richard J. Lewis and screenwriter Michael Konyves (whose only credits until this one involve awful Sci-Fi Channel movies) mess so needlessly with such a good thing? Richler's novel played fast and loose with Panofsky's reliability as a narrator, hence the hedging title. At one point in the book, Panofsky is accused of murdering "Boogie," who goes missing after Panofsky finds him with his second wife, whom he was trying to divorce anyway. It's an admittedly light subplot meant only to throw Barney's version of events into an even fuzzier light, but here it's shown as a major first-act turning point, with plenty of buildup heightened by Konyves' invention of an angry detective who's just written a true-crime novel about the case. That casts a heavy pallor of doom that's swiftly abandoned as the film moves on with Barney's life, but leaves the audience shrugging: "What was all that about?"

Similarly, the film clings onto the Alzheimer's turn like a lifeboat in the plot's meandering sea, and the effect is morose and romantically unearned. Giamatti's embodiment to that point is accomplished enough to be willing to follow him down the trail of tears that is mental denigration, but the filmmakers weren't on his same page before that, and they're not afterward. Their cluelessness regarding their own recruited talent and the richness of their source material is beyond frustrating -it's a deal-breaker. We don't trust them with the sentimental turn, and clearly neither does Giamatti.