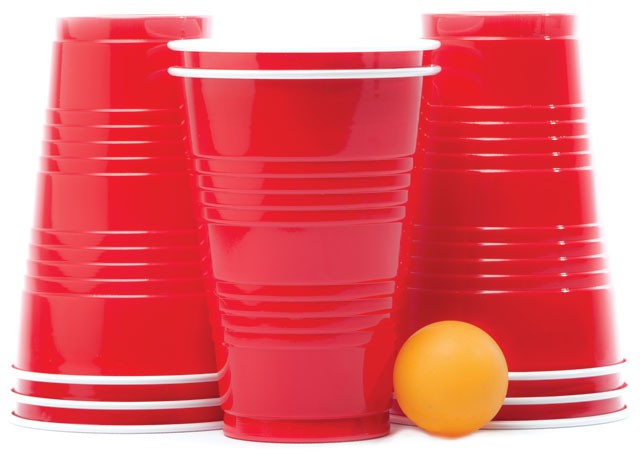 I represent that embarrassing combination of rabid competitor and abysmal athlete. You name a sport, I've played it, and it pressed charges shortly thereafter for emotional damages.

So when I found beer pong in college and displayed an idiot-savant competency at it, I never looked back. I could be a mangy tree sloth and still dominate the table, and I loved that. And by love, I mean acted like a complete shithead during games, win or lose. This has continued for years, to the detriment of civil discourse everywhere.

Then I learned of a double-elimination beer pong tournament hosted at Fubar every Tuesday night – that day also happened to fall on the evening before my birthday. There was a $250 cash prize awarded to the winning team, and lots of drink specials for everyone else.

The night of the tourney, I drive to my friend Chuck's place, my stomach in knots. I'll only drink enough to get mellow and calm my hand. I won't make any stupid mistakes.

10:45 P.M.
DJ: So the team name is … "Jesus as Fuck?"
Me: Yeah. It's a simile.
DJ: That's really, really stupid.
We pay our cover and walk inside. I crushed four beers and a shot of cheap tequila before even arriving at the club, which is checkered with felt-green tables and red cups. I'm already sweating like Karl Malone at the free-throw line.
10:56 P.M.
Our team gets called, sending me scrambling for Yuengling two-for-ones before the game starts. Tall, brunette twins staff the bar tonight. One's hair has been crimped, the other's ironed straight. I ask whether management mandates they style their hair "so that I can tell them apart." Stone silence. The douchesharks are circling. I wield dual beers with pride.

11:15 P.M.
Despite swearing a hole in the ozone layer, swatting at errant balls long after clearing the pong table and distracting our opponents via vigorous crotch thrusts, we lose our first match by one cup. I am crushed, but then I hear the DJ summon "Whacky Wavy Flailing Inflatable Armtube Man" to Table 5. This is suddenly the most hilarious thing I have ever heard. I rush two girls sitting at the bar to talk about it. I have a friend who kills rodents and pests for a living, and I've seen the look in these girls' eyes before – right when he leaves on a house call to shoot raccoons in the face. I buy two more Yuenglings.

11:30 P.M.
We have been ejected from the tournament. The walls inch closer.

1:15 A.M.
I am suddenly at my favorite bar downtown. Chuck is sitting next to me, and at some point Pest-Killing Friend emerged from a night of possum-wrangling to meet us and hand me another beer. The room is quite spin-ish, so despite blacking out I know I've been doing it right.
Me: How long have I been gone?
Chuck: Beats me, but the gibberish started around midnight.
Me: Wait, is it my – IT'S MY BIRTHDAY!

1:30 A.M.
It is still my birthday. Everyone in the bar damn well knows it. I announce loudly, to nobody in particular, that it's now time "to get some chicks." This apparently means assaulting the poor doorgirl with drunken word-porridge because she is boxed behind the cash register and can't escape.

1:34 A.M.
In the middle of yakking about who knows what, I stop. My stomach starts to rumble. I am about to literally yak all over myself and the doorgirl's shoes. There is no time to dash to a bathroom or a suitable receptacle. We make eye contact. It's in God's hands now.

1:35 A.M.
I just start burping. Violent, ancient-alien, Sumerian-devil-chant burps. In her face, for about 30 seconds. No vomit. Just a short passage from The Exorcist, the Musical. There are no words between me and my victim. I can't bring myself to look at her, so I merely stumble out the door, where my friends rush to meet me, laughing like jackasses all the way back to Chuck's car.