‘Battle of the Year 3D,’ ‘Prisoners’ and ‘The Wizard of Oz IMAX 3D.’ Still playing: ‘Austenland’ 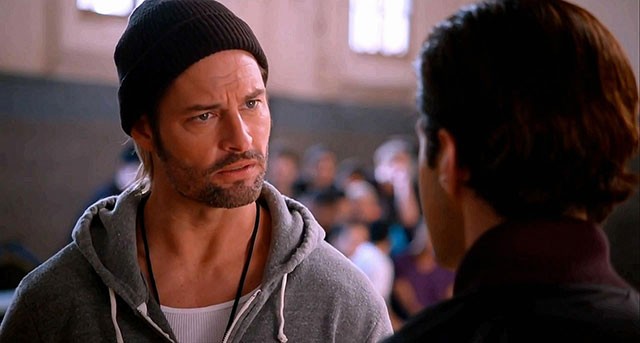 Battle of the Year 3D In the final years of Lost, I was really sure Josh Holloway was going to become a huge breakout star. I had his path all mapped out for him: a leading role as DC’s Green Arrow, followed by a Jackman-like jeté into romantic-comedy hunkhood. Instead, Green
Arrow is now just another small-screen Smallville wannabe, and Ryan Gosling has the “hey girl” market just about sewn up. And what of the erstwhile James “Sawyer” Ford? He’s playing a former basketball coach tapped to lead a dance team to victory in an international championship. Siiiigh … we sure could use one of those alternate realities right about now, huh, James? (Oh, and Chris Brown co-stars, which might explain the MPAA’s warning of “some rude behavior.”) (PG-13) – Steve Schneider

Prisoners And speaking of Hugh Jackman, guess who he wants to be now? Liam Neeson! Jackman’s latest project (which he actually dropped out of at one point, only to later return) casts him as a father pushed to desperate
measures to rescue his kidnapped daughter and her friend. Shameless, right? Yet the film has been racking up glowing reviews since its debut at Telluride, with some Oscar-watchers even predicting nominations. Hey, maybe we did slip into one of those sideways timelines after all. (R) – SS

The Wizard of Oz IMAX 3D It’s the 75th anniversary of the classic musical, and Warner Brothers wants to see if America is impressed enough to pay good money for something it’s been able to see on TV for free since Eisenhower was in office. Adding 3-D 75 years after the fact is the new definition of the term “post conversion,” and your kids may wonder why you’d want to drag them to a movie they just saw six months ago, when Spider-Man’s best buddy was in it. On the other hand, a theater full of friends of Dorothy wearing 3-D glasses could make for the time-capsule photo of the year. (PG) – SS

Still playing:
Austenland A charming but lightweight Keri Russell takes a vacation to a luxurious English estate offering the world’s “only immersive Jane Austen experience.” That interesting premise almost yields a clever commentary on fantasy and obsession, but the excursion quickly grows tedious in the hands of first-time director Jerusha Hess, who exhibits misplaced pride in her own mediocre screenplay and too little sense and sensibility. (The pacing is poor and odd musical selections abound.) Only supporting players Georgia King and JJ Feild bring much freshness to a film in which the sole polished element is the silver. (PG-13) – Cameron Meier