Be brave. Be kind. Be strong. 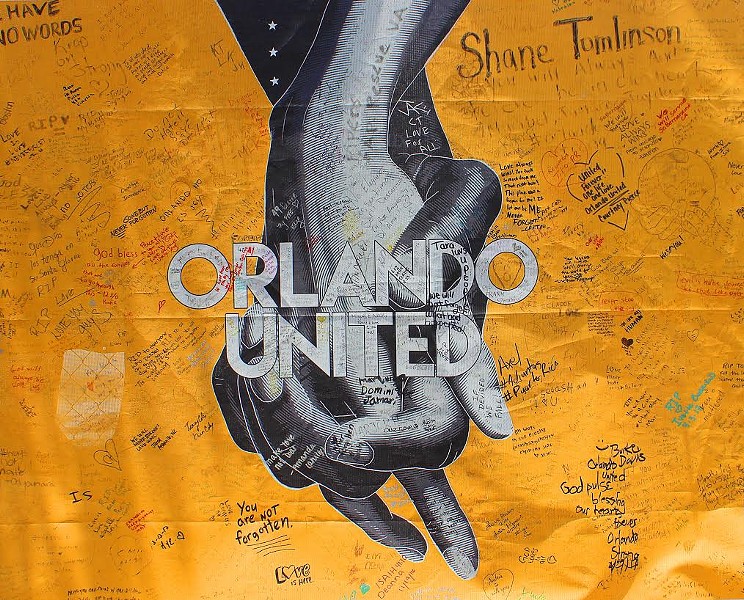 The cover of our June 15, 2016, issue was one of six designs wrapped around the Pulse site. Visitors from around the world made the pilgrimage there and left messages of love and hope.

In the hours and days just after the senseless violence at Pulse, this is how we felt.

Editor Jessica Bryce Young was inexplicably awake at 3:30 a.m. Sunday, June 12, when she saw a tweet from a British paper about a shooting at a gay nightclub in Orlando, Florida. She started digging and was chilled to see that Pulse's Facebook status read simply, "everybody get out of pulse and keep running." By 9 a.m., reporter Monivette Cordeiro was on her way to Pulse. Art director Chris Rodriguez was out with his camera, documenting lines at blood banks and the scene at the GLBT Center. Digital editor Colin Wolf was blogging and coordinating social media sharing of the stories and photos being posted by the whole staff as we communicated via text, dividing up assignments and just beginning to tell a story that will be a part of Orlando forever.

On Sunday, we posted 13 stories on the shooting; on Monday, June 13, Orlando Weekly's editorial staff ripped up the issue that had been set to go to the press that day and started over. From that day forward, all of us have written over and over about Pulse. From the morning of June 12 until today, everything has been told through the lens of this grief, in one way or another. This past year has felt like an extension of that one hot day in June. We are glad we've been able to help family members and friends tell their loved ones' stories.

But as the early days stretched into weeks and months, our emotions changed. Now we were one of Those Cities, being cynically used as a partisan football in campaign speeches. We got used to hearing our name in the mouths of celebrities. We vacillated between gratitude to the Glenn Closes, Anderson Coopers, and Lin-Manuel Mirandas of the world and weary anger at the politicians using our dead to score political points.

As we commemorate the Pulse tragedy and pay tribute to the lives that were lost or irrevocably changed, it's important that we also recognize the simple moments of human kindness: hundreds of people gathered outside of blood donation centers, strangers embracing each other at candlelight vigils, countless benefits to raise money for victims and their families. These seemingly small expressions of love are what get us through tough times. And in a world where it seems like we're constantly subjected to grotesque displays of inhumanity, it's those moments of decency in the face of hatred that we need more of. Be brave. Be kind. Be strong.