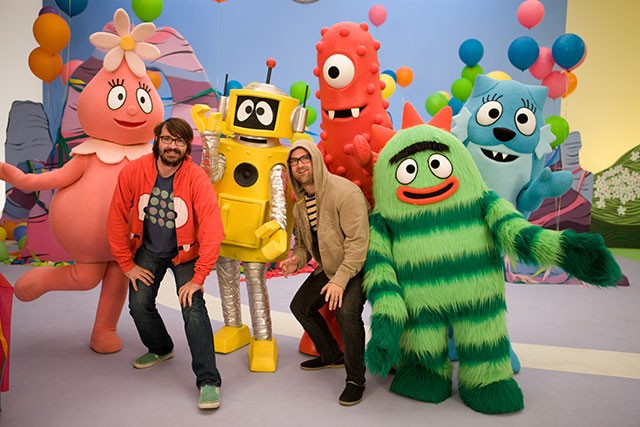 YO GABBA GABBA! LIVE!: GET THE SILLIES OUT!

Cuddliness has never been Anthony Bourdain's thing. The author and former No Reservations host has cultivated a public persona hinged on ties to middle-to-highbrow taste buds, profanity, punk rock, drug use, sexual allusions and an air of caustic, generally rebellious bad-assery. You wouldn't ask Bourdain to watch a bunch of little children, nor expect him to agree.

Yet on March 10, 2010, Bourdain did some babysitting – of a very public variety. Appearing on the Nick Jr. show Yo Gabba Gabba!, the chef donned a doctor's coat, pink dress shirt, tie and khakis for his role as Doctor Tony. Tony, you see, stopped by the brightly colored, happy-go-lucky world of Gabba to diagnose blue, cat-like dragon Toodee as she recovers from a cold. Unlike the everyday Bourdain, ol' Doc is totally harmless and infinitely patient. It's surreal to see this man counteract his image with only slight irony, but this is the kind of feat the program (which is aimed at preschoolers) can pull off regularly.

Over the six years it has aired, Gabba has featured guest appearances by lots of familiar-to-adults celebs – Andy Samberg, Jack Black, Jason Bateman, Elijah Wood – and a murderers' row of musicians from indie rock, hip-hop, punk, electro-pop and other styles rarely aimed at little kids' interests. Weezer, the Flaming Lips, the Killers, Ladytron, Mos Def, Mýa, the Faint, Taking Back Sunday, My Chemical Romance, the Shins and many more have stopped by. Top-notch garage-punk outfit Rocket From the Crypt even temporarily shelved their breakup for a Gabba performance. Further, '80s rapper Biz Markie and Devo-mastermind Mark Mothersbaugh host regular segments, and the show was partially created by Christian Jacobs, who is also known as MC Bat Commander of the lighthearted ska-punk troupe the Aquabats.

The massive pull Yo Gabba Gabba! has with indie-credentialed entertainers (especially musicians) is a logical byproduct of its very construction. A famous verse from the Ramones' "Pinhead" inspired the name, and Jacobs traces the germ of the show's concept back to when he watched a 50 Cent music video with his 2-year-old daughter circa 2003. His daughter was instantly smitten with the beat, but Jacobs didn't want her imitating the lyrics of what he recalls as "In Da Club," so he changed the channel. Soon after, he changed it back to gauge her reaction (which was still very positive). He realized the value of bringing adult-oriented music to a kid-friendly context. Part of the program's goal is inspiring long-term music fans through its range of sounds.

"We've had some people that want to come on the show that we've turned down because we felt like the energy wasn't right. It's like, 'Hmm, I feel like they might just want to come on the show 'cause the show is cool or because they have a new record coming out,'" says Jacobs, who co-created Gabba with Scott Schultz. "We're not looking for people that are trying to promote themselves, and we're not trying to use those people to promote us."

The program's cameos come from personalities who have a genuine stake in entertaining and helping kids, emphasizes Jacobs (who currently has four children between the ages of 3 and 13). In a 2009 blog entry on the Travel Channel's website about children's television, Bourdain – the father of a young girl, too – heartily praised Gabba, going as far as to say, "I know every song and every lyric by heart." Jacobs and company then contacted him to appear, and Bourdain "flipped out."

As a license past the small screen, Gabba is also doing very well for itself. The show's success has led to a handful of live shows that have embarked on national runs. Get the Sillies Out!, the third and current live show, stops by Bob Carr Performing Arts Centre on Wednesday afternoon. The live event will include the TV show's main crew – namely, host DJ Lance Rock and creatures/buddies Muno, Plex, Brobee, Foofa and Toodee – plus ample eye candy, fan-familiar songs and Biz Markie. In terms of merchandising, Gabba has teamed with skate shoe/clothing brands Vans and Volcom and designer toy company Kidrobot, further enhancing its credibility among teenagers and adults past the typical viewing age. Jacobs tells a story about a business partner who wanted to license Gabba to Walmart for footwear, but Jacobs vehemently disagreed because it didn't fit the indie-leaning spirit of the show and its makers. "We all grew up wearing Vans. If the characters had shoes on, they'd probably be Vans," he says. "It just makes sense."

When Gabba was originally developing, the show's marketing and merchandising weren't of great concern to Jacobs, but as deals have fallen into place, he believes that for the large part, everything has synchronized with the show's sensibilities.

"I think having integrity as a brand has always been important to us, but even thinking of it as a brand is something new for us because we just wanted to make a fun show," he says. "We're just trying to make a fun show for kids and for us and have a good time, but at the same time, I think what you do put out there as a brand shows [whether] you have integrity or you don't."