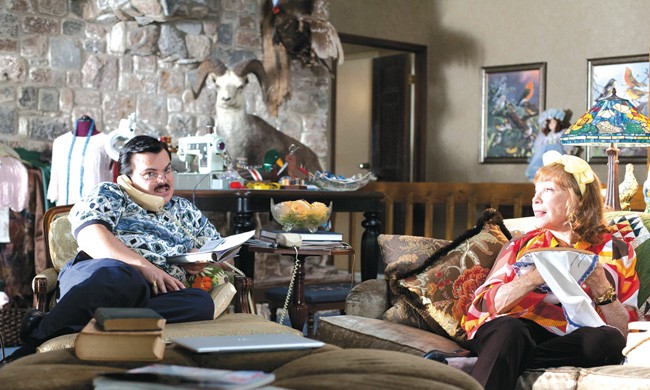 Virtually nothing about co-writer and director Richard Linklater's Bernie makes much sense. It's a half-fictional, half-documentary true story about an effeminate mortician/Sunday School teacher/local theater director in a small East Texas town – make that tiny conservative town – who takes up with a wealthy, toxically unlikable octogenarian and shoots her in the back, only to find the entire town rallying to his defense. Even more bizarre, funeral director-cum-murderer Bernie Tiede is played by Jack Black with wholesomeness, restraint and Oscar-worthy heart, leaving behind (at least temporarily) the broad kiddie soft-shoe he's spent the majority of his superstar capital on. When you hear that Bernie affords him the chance to dance while belting out “76 Trombones” from The Music Man, fly a plane on his own and guest-lecture a cosmetics class on dressing the dead, you might automatically imagine you know the kind of movie this is. Try to not do that this time.

Throughout the film, Linklater's warm and faithful feature sits politely next to the attention-hogging doc machinations. Actual interviews with the town's locals who knew the real Bernie and his “friend,” the reviled Marjorie Nugent (Shirley MacLaine), dominate much of this conversation, and they're chock-full of doozies, most tellingly the collective indifferent shrug that greets the news that Nugent's body was discovered – nine months after the last time anyone talked to her – at the bottom of a deep freeze, underneath packs of icy food. As for Bernie, whose fey existence would probably still panic larger Southern communities, one woman put it succinctly: “If I made a list of people I knew were going to heaven, Bernie would be the first on that list.”

Maybe he's perfect. He still confessed to a brutal felony and must face the full extent of the law, or so Linklater's old friend Matthew McConaughey believes. McConaughey plays Danny Buck, a news-camera-mugging district attorney who can't stop dropping his jaw at these people. Who “sticks together” anymore? Let alone in praise of a short, chubby corpse artist who's flying first-class to other countries?

Audiences could very well be aghast, too – Bernie is a pitch-black comedy in subject, but lithe as a pixie in delivery. Linklater has never been better than he is here (both he and McConaughey grew up in Texas), presenting the macabre tale as if it were a regional character trifle. MacLaine fills in some blanks, and McConaughey is a welcome arch figure in a town where moral ambiguity had better be earned through near-Christ-like acts of goodness.

With his genial smile, prodding mortality with bemused knowingness, and, my god, that lovely voice that can still surprise us a dozen years after High Fidelity (hell, 16 since he parodied Jesus Christ Superstar on Mr. Show With Bob and David), Black sells the idea of purity and compassion without peacocking, at least not excessively so. His every gesture seems to come from an honest place, and whether that did his real-life counterpart any good in court, Black's performance shouldn't be ignored by a jury of his peers on the red-carpet circuit this year.