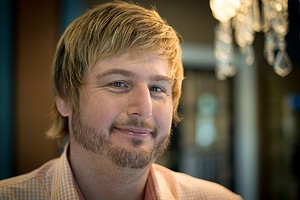 Copperhead owner Chris Martin is not only responsible for nearly all of the flying hair you see in this dolled-out issue, he also – full disclosure – rats and chops and bleaches the heads of Orlando Weekly news hounds Erin Sullivan and Billy Manes with all due frequency. Iconic! Martin opened Copperhead nearly eight years ago, after working at the Wave on Washington Avenue for the preceding nine years. It was back at the Wave that he made his first foray into the pageant circuit, sponsoring a local pageant and throwing some hair that would eventually go on to produce Miss Florida 2003 and subsequently Miss America 2004 Ericka Dunlap. That victory – among three Martin-styled Miss Florida victories – earned Martin the gig as official stylist for the Florida hopefuls in the Miss America pageant. If there have been real catfights or tragedies, Martin’s not revealing them (everyone is “nice” and “bright,” apparently); it’s merely his job to make pageant girls – like all clients – “the best version of themselves: healthy, shiny, pretty. To make them pop.” Also, not everyone is a beauty queen, and that’s just fine by Martin. “I never get bored doing hair,” he says. “Especially the hair of my challenged clients, like Billy Manes.” There she is.