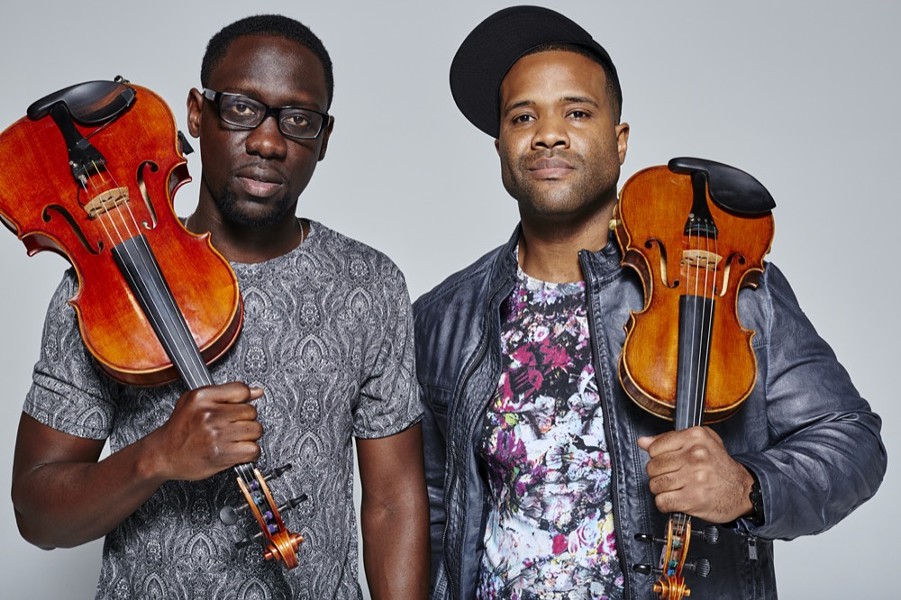 Kev Marcus (Kevin Sylvester) and Wil B (Wilner Baptiste) were just kids when they met in the orchestra room at Dillard High School of the Performing Arts in Fort Lauderdale. The majority-black magnet school also counts Nonpoint's Elias Soriano and current Cats cat (Rum Tum Tugger) Jason Derulo among its alumni. But what began as a teenage friendship has now resulted in a Showtime at the Apollo legend title, performances with the likes of Wu-Tang Clan and Alicia Keys, two mixtapes and what will become four studio albums with the release of Take the Stairs in November.

Black Violin – a moniker the pair told Strings magazine they took from the title of jazz violinist Stuff Smith's 1972 solo album – blossomed when Sylvester, a violinist, and Baptiste, who plays viola, moved in together after college; they attended different schools, both on full music scholarships. Their innovative fusion of classical and hip-hop music was the natural extension of their backgrounds and interests, but also an intentional effort to keep audiences on their toes – to force them to engage in a sonic conversation between two very different worlds.

"What other occupation is there that you can change the way people think when you're finished with their time?" Marcus noted in a 2016 UpRoxx video interview.

In addition to their own creative work as Black Violin, the pair have each done production and writing work for Tom Petty, Kanye West, Aerosmith and more. And they are extremely active in arts advocacy in schools, often inviting youth orchestras to perform with them and doing free school performances, prioritizing low-income and Title 1 schools. They've "adopted" Bethune Elementary School in Hollywood, Florida, through Michelle Obama's Turnaround Arts mentorship program.

What about your high school orchestra class made you want to pursue music as a career?

Our high-school orchestra class was so much fun. We got the chance to play challenging music with our good friends and push our creative boundaries. It gave us a taste of what it would be like to make music for a living and we loved it.

You collaborate frequently with schools – what's your primary message to music educators trying to play both sides, connecting with students while also navigating administrators in a field with dwindling resources?

That's a really great question. Ultimately, the best way to reach kids is to communicate with them on their level and allow them to reach their creative potential with the hopes that administrators will see the value in their art. Let's show the world the value in art and music classes.

How did you come to the decision to mash up these two musical styles? That is, what gave you the confidence to make that aesthetic leap?

It has always been in us. We've been listening to hip-hop since we were little boys and we also happened to study classical music at a high level, so it was very natural for us to put the two worlds together. The confidence came by facing our fears and performing for anyone that would listen. After our performances, people were often floored and it gave us the strength to push through anything so our music could be heard around the world.

Where do you see the musical and historical threads of hip-hop and orchestral styles intertwine? Are there areas where the similarities outweigh the differences?

Music is universal. Since classical music is the oldest form of tonal music, everything we consume now from pop, jazz, country, gospel, and even hip-hop stems from classical progressions and ideology. The similarities can be found in the chord progressions. The biggest difference between the genres is the creative freedom. Classical can be very rigid where the best hip-hop artists are lauded for them being extremely creative and doing things that others haven't been able to accomplish.

What era of each most informs your own style and musicianship?

Classically speaking, we approach the violin from the Baroque era. Very clean and concise playing without sliding to notes. We relate more to the Golden Era of hip-hop ('95-'99) because we grew up during that time. The hip-hop back then was more likely sampled from old jazz and rock tunes and had more tonality during that genre. These two styles strongly influence our sound and approach to music.

– This story appears in the Feb. 5, 2020, print issue of Orlando Weekly. Stay on top of Central Florida news and views with our weekly Headlines newsletter.