The strife-ridden indie rockers still strive to treat one another like “decent human beings.” 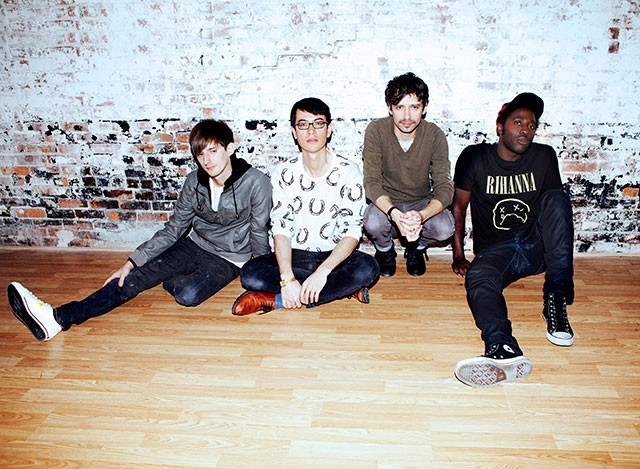 BLOC PARTY with the Dog Apollo

Sometime around September 2011, Kele Okereke learned a secret the hard way. While having lunch on New York City’s Eighth Avenue, the frontman of the London-rooted and New York-affiliated indie rock/post-punk outfit Bloc Party saw guitarist Russell Lissack pass by. Okereke went, “Hey!” but Lissack didn’t see him. Then, in a moment of amateur spy savvy, Okereke followed his bandmate around the corner only to catch Lissack, bassist Gordon Moakes and drummer Matt Tong – every Bloc Party member but Okereke – converging outside a rehearsal space they soon entered together. “I hope I haven’t been fired,” Okereke told NME later in September in a piece that relayed this account. “I don’t really know what’s going on because we haven’t really spoken recently, and I’m a bit too scared to ask.”

Soon after the NME story ran and its details dispersed around the Internet, Bloc Party’s camp clarified that the band were not kicking Okereke out. As it turns out, that whole anecdote was, in Tong’s words, “a misjudged joke.” “[Kele] quite often says off-the-cuff, jokey comments in interviews that often get misinterpreted or quoted verbatim, so it was just one of those moments where he was joking around with a journalist and then the next thing you knew, we’d apparently broken up,” the 34-year-old Brooklyn-based drummer says. As soon as Tong read the article himself, he knew what was going on.

Nonetheless, Bloc Party’s recent happenings validate the cliché that every joke contains some truth. In a recent Pinoy Exchange interview, Tong said that the hiatus the group initiated in late 2009 after touring on 2008’s Intimacy was crucial to making sure that the group completed another record and were “decent human beings to each other.” “To boil it down, our main problem was that we just weren’t very good at communicating with each other. We’re definitely quintessentially British in that regard. Even petty grievances suddenly become blown up,” Tong says now, avoiding specifics and adding that no one ever addressed the problems piling up.

Bloc Party was young and inexperienced when they first began touring and didn’t know what toll that lifestyle would take, after convening in 2003 and hitting an early praise/hype apex with 2005 debut Silent Alarm, Tong notes. Today, the drummer wants to enjoy playing in the group more and “really reappraise how to be a member of the band and how to be more tolerant and respectful.”

Last summer’s Four – a tonally erratic and more alt-rock-inclined record than the electronic-oriented Intimacy – isn’t titled as such just because it’s Bloc Party’s fourth full-length. The name also represents the years spent between releases and the idea that Four is a more band-centric work than Intimacy and thus one that owes more to the entire quartet. Just putting the number out there is a call to unity.

Past conflicts could crop up again and ultimately sink the project, of course, but Tong is hoping for an alternate route if worse comes to worst. “I’d rather for us to drift apart and at least be open to doing something in the future,” he says, “than just saying, ‘That’s it. Can’t do this band anymore.’”