Montreal’s Bloodshot Bill specializes in a primal mix of blues, country and rockabilly 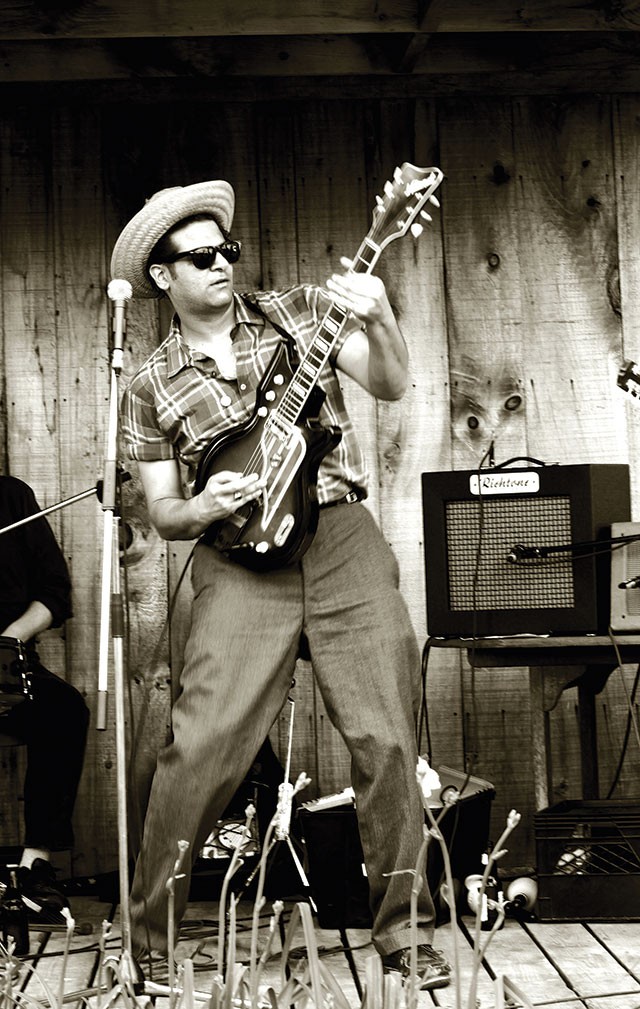 BLOODSHOT BILL with JD Wilkes & the Dirt Daubers, the Wildtones

It’s impossible to place Bloodshot Bill into any sort of neat box. Yes, the Montreal native is a prototypical one-man band: one hollow-body guitar, one bass drum, one hi-hat cymbal and one voice. Yes, he blends his supercharged gutter blues and primitive country with the garage-rock influence of close friends like Mark Sultan and King Khan. And yes, his fashion sense reeks of rockabilly, from his slicked-back hair (held in place by a signature line of pomade, no less) on down to his cuffed khakis.

But Bloodshot Bill is a man out of place and time. His prodigious discography rivals that of even the most mythologized bluesman. Musically, his electrifying riffs are on par with Lightnin’ Hopkins, Hasil Adkins and Gene Vincent; vocally, Bill can careen from Elvis croon to percussive growl to demonic yodel in the space of a single line.

In spirit and attitude, Bill feels cut from the cloth of Jack Kerouac circa 1949: a swarthy, fire-eyed man of Quebecois descent obsessed with plumbing the creative depths of a particular slice of old, weird America. Like Kerouac’s stories, Bill’s artistic expressions feel shockingly sincere, scintillating, even scandalous – particularly when he’s rocking and convulsing and spitting on stage in his trademark silk pajamas.

Unlike Kerouac, Bill isn’t much of a talker; in a genial but clipped phone interview, he momentarily lit up when asked about recording techniques (“I love putting echo and snapback delay on my records”), collaborative projects (“Playing with new bands and different friends keeps things really fresh for me”), standing out from the crowd (“I’m not really into scenes. … I feel like an outsider of whatever scene there is”) and promotional work, including a spaghetti-flavored lip balm and a spokesman turn for a Montreal bowling alley’s “Disgusting Burger” (“They asked me to be the Colonel Sanders face of it, which was a big compliment”).

But ask Bill to explore his fascination with old forms of American music and he keeps it as basic as possible: “I just love that real simple sound. I don’t really know what it is. An attitude, I guess.” Although Bill claims he’s more of a natural drummer (“My feet are always moving trying to find a beat”) than a guitarist (“I’m really horrible compared to a lot of people”), that old-school, in-the-raw attitude comes across full-force in a live setting. “When the musicians I like – Gene Vincent, Eddie Cochran, all that rockabilly stuff – were playing, they didn’t have any gadgets to use,” he says. “They were just going straight live. So, if they can do it, I can do it. Or I can at least try.”

And try the man does, both on stage and on record, of which there are plenty: 40-something LPs, split EPs and collaborative records released over the last 13 years on more than 10 different labels. You could say that Bill has matured over the years, easing out of manic early cuts like “Sex on the Metro” and “Drunk in the Morning” to slightly more mellow recent material like “I’m in Love” and “Baby Don’t Go.” But even those romantic songs still feel inhabited by a wild, animalistic spirit.

Predictably, Bill has heaps of release plans for 2014, which makes sense considering he records primarily on basic equipment in his own home studio. “Mark Sultan and I did another album as the Ding-Dongs last year, and I should have another record out on Norton Records this year, too,” he says. “I’d also like to do a Volume 2 of this country record I did a couple years ago – maybe a Volume 2 of this outer space-themed one, too. And some more Tandoori Knights stuff [with King Khan].”

Bill last visited Orlando in 2011 with Tandoori Knights, and he says he can’t wait to get back. Four of his nine planned 2014 U.S. dates are in the Sunshine State, and us U.S. fans should enjoy every second of it – not only does he tour here sporadically, but he was even banned from the States for five years in the 2000s because of work permit issues. Those issues are behind him now, and Bill says he carries on with one goal in mind: “I prefer to play for people who want to have a good time. That’s fucking it.”