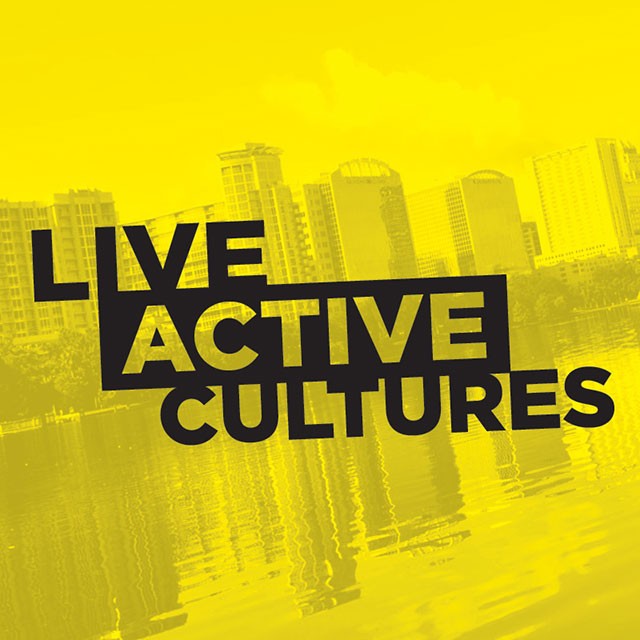 Like countless other nerdy Netflix subscribers, I recently spent an entire weekend marathon-watching the newly released fourth season of Arrested Development. Binge-viewing makes creator Mitchell Hurwitz’s intricately interwoven in-jokes easier to follow, but I have only one minor bone to pick with the plot-line: not enough Tobias Fünke.

Sure, actor David Cross nominally appeared in most of the season’s 15 episodes, but everyone’s favorite eternally inappropriate analrapist was the focus of only two. Worse, though Tobias once again “blue himself” with cerulean body paint (this time to assume the role of Sue Storm in an awful unauthorized Fantastic Four musical), the pitiable registered pedophile never achieved his life goal of performing with the world-famous Blue Man Group.

Fortunately, Orlando currently offers multiple opportunities to fill the Blue Man-sized hole Arrested Development may have left in your heart. In an unusual example of out-the-box cross-promotion, the Manhattan-based performance art empire’s Universal Orlando outpost has teamed up with Loch Haven’s Orlando Science Center to launch a unique learning experience. I recently had the chance to sample both outlets’ latest offerings, and to be frank – they blue me away.

It’s been more than six years since the Blue Man Group took over Universal’s former Nickelodeon sound-stages for their nightly performances, and at least three since I’ve seen their full production, but it’s safe to say I’ve been a fan of their avant-garde brand of comedy drumming since first seeing their original Vegas show a dozen years ago. Last week, a press invitation provided the opportunity to take a visiting relative (and Blue Man Group virgin) with me to see the show.

Cirque du Soleil, the Blue Man Group’s closest local competitor, is almost a purely aesthetic experience (and exquisitely so), but I was reminded how much satirical smarts Blue Man has going on under its slapstick surface. In February 2012, I previewed an excerpt of the new material added to the show last year, but finally seeing the GiPad video screens used in context made me better appreciate the clever commentary on our information-overloaded culture.

Moreover, I had forgotten just how ballsy these blue baldies are when it comes to interacting with the audience. There are plenty of local attractions that “play” with their patrons, but I can’t remember seeing anything besides Rocky Horror that pushes the envelope as far as Blue Man Group: balancing on viewers’ heads while walking precariously across seat-backs; depositing a wad of chewed-up marshmallow in a woman’s purse; taking a man’s Toblerone, orally juggling with the candy, then spitting it in a kid’s palm. Some of those folks may have been plants, but that guy sure looked pissed about his overpriced chocolate.

The show isn’t flawless (an overtly fake body-painting video segment goes on overly long), and some of the gross-out gags may make you gag (they must have stockpiled millions of Twinkies), but all is forgiven in the booty-shaking glowing-balloon finale, which was the best rave I’ve attended since ecstasy went out of style. Even at $70 and up for adults, this 100-plus minute spectacle is still Orlando’s best value in paint-splattering performance art. FYI, for an extra $20 or so, you can head upstairs to the small but swank Bluphoria VIP lounge for drinks and a private meet and greet post-show; it’s almost worth it for the balcony view of Islands of Adventure’s backstage.

The impetus behind my invite was actually tied to Orlando Science Center’s limited-time exhibitions of Making Waves, a traveling museum installation about the science of sound that takes its inspiration from Blue Man’s signature sonic stylings. Kids and parents both will love banging away on hands-on instruments (like the Slide-u-lum, Build-u-lum and Sand Drum) with bilingual signage explaining the associated physics. The centerpiece is a replica of Blue Man Group’s iconic PVC tube xylophones on a kid-scaled stage, perfect for photo ops. At only 1,500 square feet, Making Waves (which runs through August) is too small to be worth Orlando Science Center’s $19 adult admission in and of itself, but visit Friday or Saturday during their Summer Nights extended hours and Iron Man 3 in their spiffy 4K 3-D theater is included. Now, that’s a flamboyant comic-costumed neurotic of a different color.