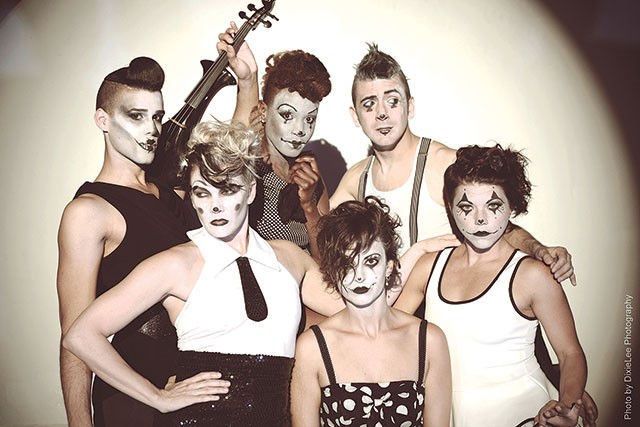 Last month, I visited the downtown Orlando Public Library’s gorgeous new Dorothy Lumley Melrose media center to attend the premiere screening of Focus on Local, a compilation of short documentaries on area performing artists. A platoon of filmmakers led by Robin Cowie (Blair Witch Project, Lovely Molly) captured footage over a single March weekend and fashioned it into 15 segments showcasing the breadth of grass-roots performance in Orlando, from Benoit Glazer’s Timucua White House to the Orlando Fringe. I appreciated the attention paid to the highlighted homegrown groups, and that only a few pieces were filled with fuzzy platitudes about the Dr. Phillips Center for the Performing Arts, which sponsored the project. But my favorite portion by far was the one featuring Blue Star, proprietress of the Venue in Ivanhoe Village, gushing genuinely over her love of making art in this town.

Blue’s infectious enthusiasm, captured so clearly in the film, infuses her theater and everything she creates there, which helps explain why her show, VarieTease 50th, was the hottest ticket at the Fringe’s Black venue. Those who were unable to secure tickets for the sold-out Patron’s Pick-winning run back in May have another opportunity this month – on July 14, 18 and 21 – to see the best dance show of the Fringe, and my favorite offering at the festival that I didn’t review. (To those who had hoped they’d heard the last of Fringe for a while, my deepest apologies.)

My “Fringe crush” on Blue’s VarieTease shows began when my mind was effing blown by 2007’s Carnivale, and I’ve continued to follow their evolution, reviewing a dozen or so installments since. Somehow, we’ve already arrived at VarieTease’s 50th show, and it’s stunning to see how far the troupe has come in the decade since their inception. Blue’s concepts and choreography originally captured my attention with showmanship and campy sparkle, born of their neo-burlesque drag club origins. But her work has grown and deepened into a darker fusion of her balletic background and modern influences, without losing touch with her anarchic inner child. (Her name is Lilly, and she records overlong pre-show announcements.)

VarieTease 50th reunites Blue with Willy Marchante and Tymisha Harris, core members of that first Fringe cast, for a Gallic gothic penny-dreadful told in the style of a French silent film, complete with self-mocking intertitles and a monochromatic palette. The cast, sporting ghostlike harlequin makeup and Marie Antoinette wigs, is introduced via video with brief bios explaining their role in the plot, which remains somewhat inscrutable despite extensive explanations.

So ignore the storyline and get lost in the dreamlike imagery, which flows from the Parisian Metro to a French graveyard and a prison – or kennel? – before ending in the afterlife. Tableaux touch on subjects like incest, botched plastic surgery and suicidal ideation, with a mixture of sensuality, silliness and even unexpectedly profound sadness, embodied in Marchante’s impressively expressive performance.

Blue’s choreography fills the postage-stamp-sized Venue stage to its breaking point, making me hold my breath as her dancers hurl themselves expertly about the space, and her fusion of classical and modern styles (with a side of hip-hop) feels fresher and more alive than ever. Further, while I’ve enjoyed many of the pop musicians her previous shows have introduced me to (Carnivale was instrumental in my appreciation of Christina Aguilera), I love that VarieTease’s latest installment has a lush organic score that blends Moloko and Patrick Wolf with Vivaldi, the latter deftly played live on violin by Jose Navarro (in towering platform boots). Best of all, Blue has finally abandoned the reliance on lip-synch, allowing her dancers to express exclusively through her demanding dances, instead of obsessing about mouthing lyrics.

VarieTease 50th is the series’ strongest installment in several years, and it recaptures the original magic in more mature, complex way. It isn’t perfect, but I’m far more apt to applaud a flawed piece of original, personal art like this than a mechanically polished product. Blue’s next project is October’s Monster, another multimedia exploration with painter Patrick Fatica, with whom she collaborated to create Shadows of the Waifs. If Blue’s vision keeps expanding at this seemingly exponential rate, I’m counting on the next 50 VarieTease shows to blow my mind all over again.