A focused kitchen keeps this boisterous bar and grill even-keeled 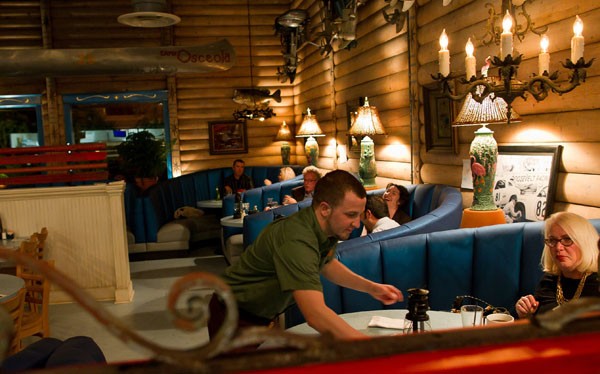 No diner with normal hearing could ever accuse the Boathouse restaurant of being tranquil or sedate. On a recent weekend night, we checked in with the charming hostess, then rode the epic sound waves past the dining room and into the adjoining Drake’s Bar, where others, like us, were taking refuge from the din. But for nearly three decades, as Le Cordon Bleu, the dining room was a place for hushed conversation … that is, until a fire destroyed it and the next-door bar, Harper’s Tavern, in the summer of 1996. The space was eventually restored, and a succession of now-closed restaurant-bar combos moved in – Harper’s Tavern & Grill, Coyote Grill & Sports Bar and, most recently, O’Boys Bar-B-Q. In those years, the decibel level, it seems, crept steadily up to the point at which it reached a crescendo the Saturday night we visited.

Fortunately, our curved booth allowed for sustainable, and discernible, tête-à-têtes – our first utterance was about how much the décor resembled that of the Winter Park Fish Company. The fact that both eateries are the work of the same local restaurateur – Craig Tremblay – was hardly surprising. Fish-lodge kitsch aside, it was Boathouse’s menu of Nouveau Southern cuisine that proved intriguing.

Biting into the first of a stacked trio of fried green tomatoes ($8.50) laced with a mustard remoulade was a promising start. The roasted red-pepper aioli and arugula salad were wonderful complements, but the second tomato, a thicker slice, wasn’t quite done. Like Sheriff Buford T. Justice, the “Smokey and the Bandip” ($10) was savory in character, with smoked salmon, whitefish, potatoes and tomatoes cooked in a sherry cream sauce. We just wished it had Buford’s thick, not soupy, consistency. From the menu section labeled “Chef’s Comfort Entrees,” the hefty bone-in short rib ($22) is a smoky, beer-braised slab of beefy goodness. To eat it all in one sitting would be impressively gluttonous; to save room for dessert, decidedly prudent. A side of creamed corn casserole ($3.50) is highly recommended, though the dish is sided with enough garlic mashed potatoes and crunchy vegetables to balance the meat. You won’t pick the “Row, Row, Row Your Boat Grouper” ($26) up for a song, but we found the fish to be perfectly grilled and fork-flaky. Just as good was the side of cheddar grits and rock shrimp slathered in a smoky charred-tomato sauce. (A fairly wide selection of sandwiches, salads and flatbreads have similarly jokey names but won’t sink their hooks quite as deep into your wallet.)

Desserts are made in-house, and made well. The peach cobbler ($5.50), prepared with fresh fruit, a biscuit topping and a restrained sweetness, is as good as I’ve had anywhere. The cream cheese frosting made for a heavier, Southern-style strawberry shortcake cake ($5.50), but I would’ve preferred a lighter, fluffier rendition to end the meal.

Still, most dishes we sampled were met with nods of approval, and credit goes to chef Rob Walker and his staff. Unlike some of the diners, the kitchen didn’t appear distracted, so while dangling aluminum canoes, ensconced outboard motors and an acoustic cacophony battled for our sensory attention, it was the food that ultimately found our focus.