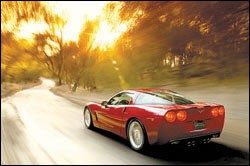 CENTRAL FLORIDA INTERNATIONAL AUTO SHOW Fast cars, foxy ladies and free stuff – the pull has got to be strong to get turkey-stuffers off those couches and away from TV sets. So they aim to please at this annual futuristic round-up, the convention center floor spilling over with fine rides. Among the cool concept cars, see the Cien, Cadillac's 100th anniversary tribute that was modeled after an F-22 stealth fighter aircraft. (That tells you something about the state of the world.) And consider Volvo's SCC (Volvo Safety Car), equipped with a radar unit, eye sensors, fiber-optic headlights, computer intelligence and a heartbeat sensor that "warns if something is lurking inside the car or if a child/pet is inadvertently left inside." Just a good old family car. (noon-10 p.m. Thursday, 10 a.m.-10 p.m. Friday and Saturday, 10 a.m.-7 p.m. Sunday at the Orange County Convention Center, 407-685-9800; $8 adults, $4 students and seniors)

HAWKEYE While local power trio Hawkeye may want to press-release themselves these days as "rambunctious punk-infused rock" or "indie rock without all the 'indie'," we sort of preferred it when they called themselves "'60s and '70s rock with an amphetamine punch," because it sounded like it tasted better. You, too, can take a sip of their mystery punch when they hawk (ahem) their second release, Handshake, at this CD release party, where they'll probably have turned the knobs up to 11 by the time bearded bassist Rory Mundwiler removes his shirt to reveal unlikely tattoos. At least that's what happened last time we saw them, when they opened for Five Eight. Handshake boasts all of the sort of lonely-guy trappings you would expect from a DIY EP – song titles like "We're Not Married" and "Mr. Sincerity" – but it also offers a certain urgency draped in blood/heart-red. Plus, the cover is a big Mariah Carey butterfly ... for no apparent reason. We like Hawkeye because we don't understand them. (with The Hex Tremors, Franchise, Jeff Ingelfretz; 9 p.m. at Back Booth, 407-999-2570; $5)

VIXENS AND VILLAINS Stocks may rise and fall, utilities and power companies will collapse, but nipple tape never sleeps. Witness the example set by Orlando's very own AntiBabes, who, a mere two weeks after lending their flair for fetishistic performance art to Theatre Downtown's The Rocky Horror Show, are back with yet another extravaganza of spankings, sass and suggestiveness. This one has a comic-book theme, with the ladies and gents of Jodi Thomas' pain & pleasure brigade working hard to titty-twist the last vestige of innocence out of your fondest four-color memories. Music is provided by DJ Circle K and others; to top it all off, there'll be toxic-sludge wrestling. Attendees are encouraged to dress like superheroes and/or their arch nemeses – an idea that's bound to tickle the fancy of any unreconstructed cape worshipper. Just don't expect any congratulatory cards from the self-protective sphincter boys at Marvel Enterprises, who recently sued the makers of the video game City of Heroes for allegedly making it too easy for gamers to crank out online simulations of Spider-Man and the Hulk. Frankly, we'd like to see some overzealous copyright lawyer just try to put the sleeper hold on an AntiBabe aficionado in a polyurethane Galactus mask. And that's not a figure of speech, either. We mean we'd really, really like to see it. (10 p.m. at AKA Lounge, 407-839-3707; $7, $5 with costume)

BOND We've said it before and we've said it again: There comes a point when – despite the fact that you're playing classical compositions on classical instruments and releasing your recordings on a classical label – you are no longer a classical musician. No matter how hot you look. The girls in Bond are hot and, as a string quartet, they have been recording cuts that are superficially classical-sounding. But, though we love to look at 'em, a set by the quartet is no more a night of classical music than a set by Miranda Sex Garden is an evening of madrigals. On that note, at least MSG have the whole dark, goth-rock thing down; Bond seems more like a bunch of half-naked sorority girls who want to show off their talent-show routine before the mixer. Hmm. When we put it that way, it doesn't sound so awful, so please enjoy the show; but please don't come away from it thinking you've experienced anything more than a tawdry pop show. (7:30 p.m. at House of Blues, 407-934-2583; $22.50-$50)

MAKULU It's not unheard of for graduates of the dance program at Rollins College to sprout their own professional modern troupe, but it's not often that they stay in town as did the duo behind U-Turn Dance. The group's debut production, Now, hit rocky hurricane timing at the end of August, so we hope Makulu will take up the slack. This original work takes its inspiration from African-American history but transcends into something more universal, explains creative manager Craig Johnson. The history is a personal one – artistic director Dario Moore, who founded U-Turn several years ago in Washington, D.C., is a direct descendant of one of the last survivors of the Rosewood massacre. What to expect? Costumes that are abstracted versions of animals. Rhythm and movement based on tribal African dance blended into ballet traditions. And a chance to see what's coming up behind the only other local contemporary dance troupe of note, Voci. (8 p.m. Friday and Saturday and 4 p.m. Sunday at Trinity Preparatory School theater; 407-695-8366; $12 advance, $17 at door; www.U-turnDance.com)

SLAYER/MASTODON Here's an interesting pairing: Slayer, who haven't put out anything that's topped their Rick Rubin-produced Reign in Blood, and Mastodon, whose release of this year's slickly produced Leviathan puts them smack-dab in the middle of their own "Rick Rubin" phase. (Of course, Mastodon's version of Rick Rubin is Minus the Bear producer Matt Bayles, but you get the point.) Slayer was releasing albums with decent songs all the way up through '98's Diabolus in Musica, but all of those albums that came after 1990's Seasons in the Abyss (when powerhouse drummer extraordinaire Dave Lombardo left the band for the god-awful Grip Inc.) and Slayer never again regained the rhythmic fury and intensity that Lombardo provided. (It's telling that with Lombardo back in the band, the highlight of their recent tours has been a beginning-to-end run-through of Reign in Blood.) The same goes for Mastodon – if über-drummer Brann Dailor were to step down, the Georgia quartet's elephantine thunderings would be severely hobbled. Of course, Dailor could probably get a job with Slayer as soon as Lombardo quits again. (with Killswitch Engage; 6:30 p.m. at Hard Rock Live, 407-351-5483; $27, $30)

CUB COUNTRY Jeremy Chatelain has been a part of some of the most prolific second-string alt/indie-rock projects to date. In 1998, he provided throat to the short-lived Helmet/Quicksand after-project Handsome, and more recently he's played bass for Blake Schwarzenbach's post-Jawbreaker band Jets to Brazil. So it's no wonder Chatelain would want to put something out by himself. What's surprising is the direction he chose to satisfy his songwriting muse. Cub Country, the assumed moniker Chatelain chose for his outlet, puts the drawl on thick as it lazes through some of the catchiest folk-rock this side of Kentucky's Palace incarnations. Here's hoping he wises up and out of the underwhelming Jets to Brazil soon. (with Entrance, Maplewood; 8 p.m. at The Social, 407-246-1419; $7)