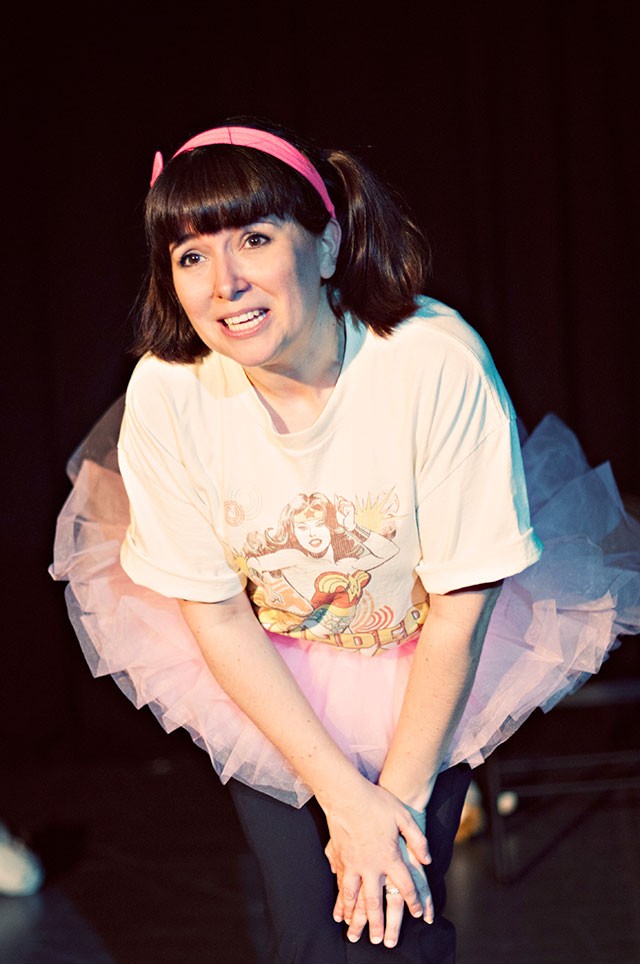 The central idea of Marcie Schwalm’s Boogie Shoes is a millennial riff on a traditional show-biz lament: “I wanted to dance, but I just wouldn’t let me.”

In Schwalm’s poignant and charming one-woman show (which she debuted during the recent Orlando International Fringe Theatre Festival), she explains how her happy feet kept getting stilled by negative feedback – feedback she herself was all too quick to internalize. As a kid, she yearned to take dance classes, only to be discouraged from sticking with it by mean girls who told her she was too fat for the pursuit. From that point onward, whenever her underlying yen to move momentarily overcame her fear of rejection, some so-called expert would get her to believe that she was just wasting her time. Sometimes, that advice was offered gently; other times, not so much. And we all know what happens to kids who instinctively agree with their detractors: They end up hurting themselves in ways no one else could manage.

As a performer, Schwalm knows how to get us on her side straightaway, and it involves acting out her story chronologically. There’s little room to resist an adorable tyke who has invited you into her room for a self-promoted recital, especially when she’s letting you hold one of her stuffed animals. Our allegiance secured early on, Schwalm can confidently deliver the evening’s haymaker: Isn’t this show, she wonders at a crucial moment of adult introspection, just another big-girl complaint about the unfairness of body culture? You betcha, comes the lightning-quick retort. And we’re going to keep hearing those complaints until the problem is fixed.

Yet Boogie Shoes (which was directed by Tara Rewis and choreographed by Schwalm) is not a harangue. As the joyously goofy hoofing indicates, it’s not a tragedy, but a story of self-acceptance ultimately triumphing over self-doubt. So if you listen closely, you’ll spot an interesting, anti-Aristotelian suggestion that the nature of things is something they can choose for themselves.

As a writer, Schwalm remembers her childhood conversation as preoccupied with how things “go” – brilliantly recalled kidspeak for the trademark sights, sounds and activity associated with a specific cultural icon. Thus, the flurried motion of steel bracelets flying upward to deflect oncoming bullets – complete with attendant metallic PING!! – is “how Wonder Woman goes.” The Marcie Schwalm of today, we learn, does not dance because someone else allows her to, or even because she is “good” at it in the academic sense. Marcie Schwalm dances because … well, because that’s how Marcie Schwalm goes.