We all witnessed how the pandemic forced restaurants to resort to novel means of generating revenue, be it curbside pickup, to-go cocktails, or selling grocery necessities. But the Galeria, a cavernous, "art-inspired" restaurant in Baldwin Park, has opted to transform an underutilized area of its dining room into an ice cream parlor called Mild to Wild. I thought the idea a bit nutty, but then I recalled a time last year when I got a broiled grouper with a side of Quilted Northern. Loved the perfectly cooked grouper; didn't care for the texture of the Quilted Northern.

Now I like ice cream (who doesn't?), but there's much to scream about when your ice cream comes properly boozed up — it's the "Wild" referenced in the shop's moniker. The "Mild," as you can probably guess, refers to non-boozy scoops. Whatever option you choose, know that there's just one size and, yes, samples are willingly given. But what initially caught our eye was the menu board scrawled with the word "Indulge." It listed specialty items like strawberry shortcake ($10).

Oy. So I continued down the list and saw a Guinness float with Ghirardelli chocolate ice cream. The $15 price tag seemed kinda high, but I ordered it anyway. Individually, Guinness and Ghirardelli are stalwarts. Together, they elicited nothing more than a dispassionate shrug. The float did come topped with a bourbon-infused whipped cream, though true boozehounds will want to get a shot of Jameson splashed in for an extra $5. That would make for a $20 float! Welcome to America. 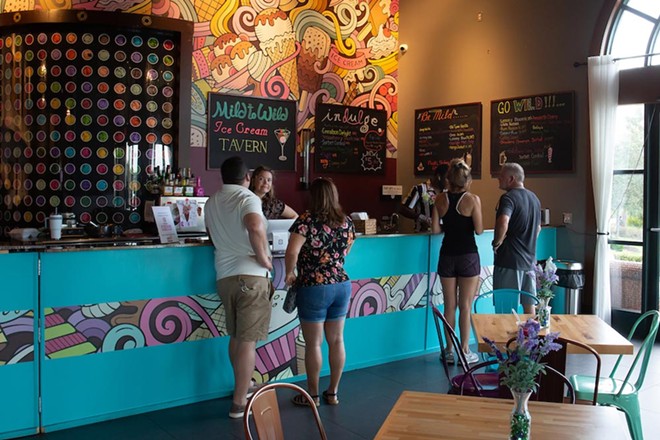 We took a gawk on the "Wild" side and settled on a cup of the maple walnut brownie ice cream ($7). It's boozed with Knob Creek. Like, heavily. In fact, the Kentucky bourbon overpowered all the other flavors. I suppose some people like that. A friend I ran into had ordered the same thing a few minutes earlier. She asked for whipped cream, but they couldn't get any of the canisters to work, save for the one with the bourbon-infused stuff. "I'm a bit drunk," she said when we met. Mission accomplished.

On the flipside is the coconut rum ($7), a vegan and dairy-free option that didn't have enough Malibu rum. An extra shot did the trick, but it, too, cost an extra $5.

From the selection of "Mild" offerings, the strawberries and cream ($6) made a perfectly fine summertime treat, little seeds and all. There was a nice density to the ice cream and, evidently, the strawberries they use come from Plant City. This isn't really the season for strawberries, but maybe they froze a bunch and used that in the ice cream. Who knows? The servers didn't. One was far too harried and the other completely disinterested.

What Mild to Wild does have going for it is its outdoor seating and the breezy views of Lake Baldwin. It's a gorgeous setting, ideal for ice cream really, and who doesn't like ice cream? Yes, it seems the restaurant made a good decision to offer ice cream. Perhaps too good. We didn't see anyone dining on the restaurant's menu of steak and seafood, and it was 8 p.m. Like Mild to Wild, Galeria is clearly taking some licks.