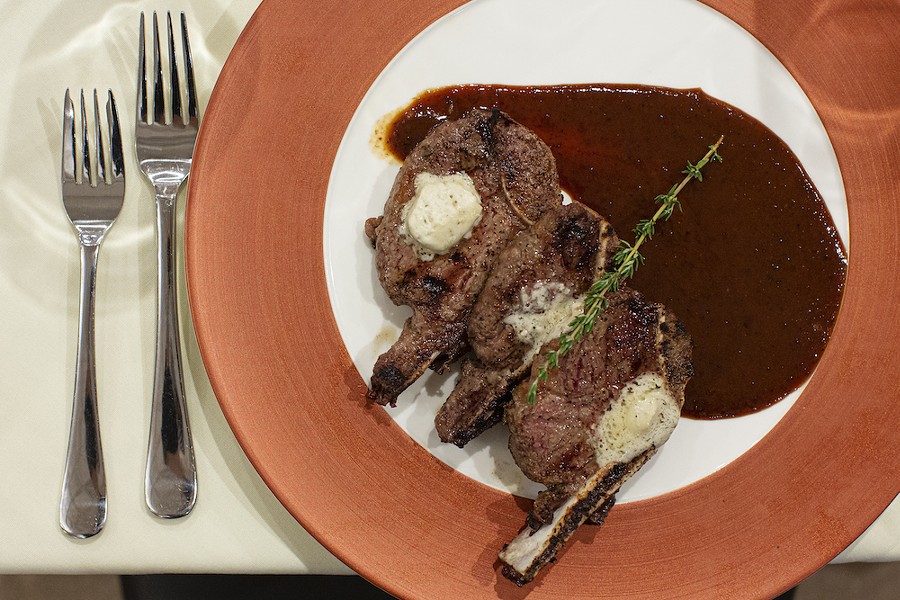 It's been a long time coming – two and a half years or thereabouts – but BoVine Steakhouse has finally bestowed Park Avenue with a high-end bastion of beef, much to the delight of ... well, I'm not really sure. Head to a local supermarket or meat purveyor and you'll notice the price of beef ain't what it used to be, and that pandemic pricing appears to have been passed on to chophouses too. Now I love a good steak, I do, but I can induce a Maillard reaction on a prime ribeye at home just fine, thank you very much.

Yet the allure of the steakhouse, be it old-school, modern, chain, Japanese, Brazilian or, umm, Australian, remains. That might explain why I looked forward to paying BoVine a visit though, like many others, I was also curious to see how they renovated the space.

Old-money Winter Park was quite upset when Park Plaza Gardens, the space's predecessor and a longtime anchor of the Park Avenue dining scene, shuttered for good four years ago. Its faux al fresco, put-a-ring-on-it decor made an ideal backdrop for many a special-occasion meal, so it was a bit jarring to see the interior outfitted in a big-shouldered Chicago steakhouse sort of way, with bricks and brown hues. But I suppose that's what JM Hospitality, the group behind the 310 brand of restaurants as well as Blu on the Avenue, was going after. After all, they do offer steaks procured from Chicago-based Linz Heritage Angus, a reputable outfit whose Black Angus cattle are renowned for their genetics and one that respected Chicago chefs like James Beard Award winner Tony Mantuano hold in high regard. 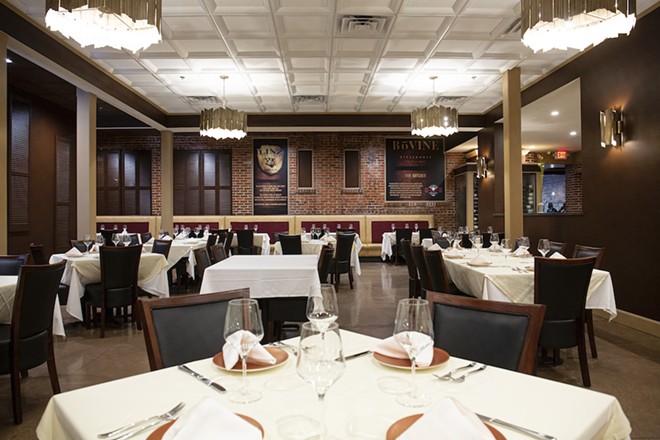 But there's a coldness to the space or, rather, a lack of warmth. Maybe they should've saved some of those plants from Park Plaza Gardens. Certainly putting some art on those bare walls would help, but I will say owner Joanne McMahon (the "JM" in JM Hospitality) has some fine taste in dinnerware – nothing but gorgeous Villeroy & Boch plates from apps to dessert. And should BoVine opt to serve water in drinking glasses instead of wine glasses, V&B's beauties would look really nice on those white linens.

But let's get to the meat of the matter: meat. A prime tartare ($20) was a classic rendition right down to the capers, egg yolk and Dijon, but the blue cheese toast points added a funky dimension that we quite liked. Another steakhouse classic – shrimp cocktail ($18) – featured a trio of jumbo crustaceans clinging to a glass filled with a nostril-flaring cocktail sauce. Also nice, but serving only three shrimp seemed a bit odd. Why not four to make for sharing parity? I mean, Ruth's Chris serves four for a dollar more and Flemings offers five (bonus!) for $22. Just sayin'.

From the list of signature items, the lamb rack ($38) seared with an anchovy-herb crust elicited immediate order envy. The yielding crust gave way to supremely tender flesh, and the tomato-mint jam was a finger-licker. Easily one of the best preparations of lamb in town. Just as dazzling was the 30-day dry-aged ribeye ($68), a 22-ouncer anointed with a dab of butter and a thyme sprig, that was just irresistibly charred. A la carte sides of creamed spinach ($8) and salt-brined fries ($8) did the trick.

We were told by our effusive server that McMahon fashions BoVine's desserts, so we ended with a crustless ricotta cheesecake ($10) and Southern pecan pie ($10) served on fetching slate-like porcelain plates. OK, OK, enough gushing – I'll stop talking about the dinnerware. But whether or not Winter Park really needs another high-end steakhouse pandering to the prosperous and propertied? Well, we could talk about that until the cows come home.