Dated cultural references come off as more creepy than charming 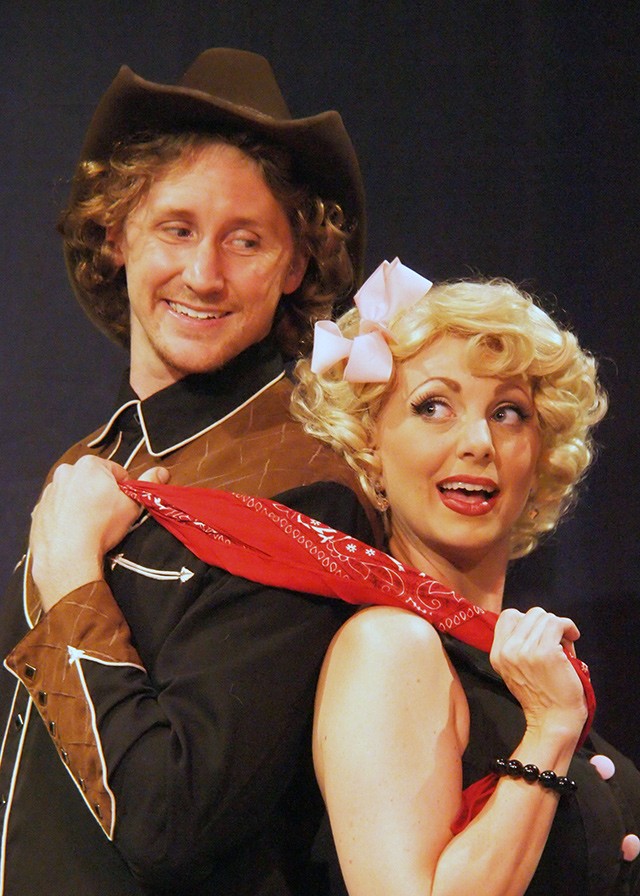 The story of five snow-stranded bus passengers – including abducted nightclub entertainer Cherie (Jamie-Lyn Markos), her rodeo-roping assailant Bo (Jamie Cline) and perpetually pickled poetry-spouting ex-professor Dr. Lyman (John Moughan) – trapped together in a Kansas diner resounded for 1950s Broadway patrons. It’s tempting to think that today’s theatergoers must be much more edgy and avant-garde in their tastes and attitudes than audiences from half a century ago. So, it’s always instructive when a local company (such as Theatre Downtown) revives a mid-century blockbuster like William Inge’s Tony-nominated dramedy Bus Stop. It reveals the kind of thing that made your grandparents giggle: casual quickies, kidnapping and child molestation.

DeBaun has also assembled a seasoned team of community theater stars, each of whom delivers strong spotlight monologues. Markos, in particular, finds compelling shadings in the Monroe role, deepening her cousin-kissing chanteuse beyond a ditzy blonde, and Tim Bass’ Sheriff Masters infuses intimidating authoritativeness with parental warmth. Likewise, the likable Cline labors to be more than a brutish lunkhead, though his crude cowboy is too boorish to be a relatable hero, and too buffoonish to make a threatening antagonist.

On the other hand, this melodramatic sitcom’s conflation of assault and abuse with amorous affection is confounding to modern sensibilities, resulting in “romantic” characters that seem more like pervy creeps than prince charmings; Lyman’s implied hebephilia is especially heinous. That fundamental flaw might be more forgivable if I had found the jokes funnier.

But the sizzling screwball pace that would be needed to leaven the script’s appalling implicit sexism never quite comes to a belly-laugh boil. The actors politely but unnaturally pause to allow one another to finish their lines without overlapping, and Southern drawls drag out dialogue even further, resulting in a run time 15 minutes longer than many previous productions of this play. And without the comedic highs, the gut-punch finale involving Bo’s sage, guitar-strumming sidekick Virgil (Jeff Hole), the show’s most sane and stable character, comes across as merely an afterthought.