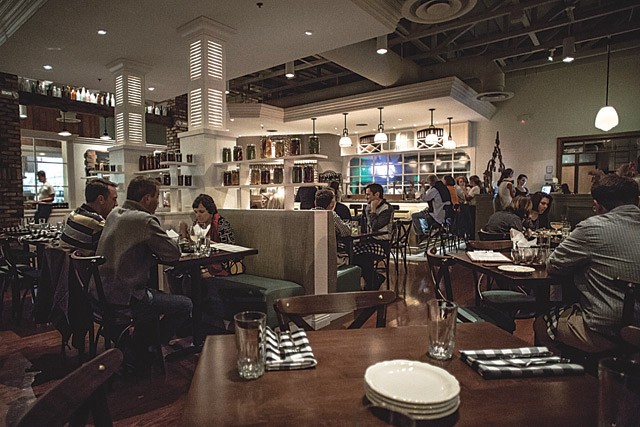 Vegetarians cruising along Fairbanks Avenue may encounter an olfactory-spacetime singularity as they approach that thoroughfare's intersection with Orange Avenue. The vortex created by the swirling scents of roasted, grilled, smoked, braised and seared land and sea creatures emanating from Cask & Larder can be powerful enough to swallow up herbivores and spew them out in the vicinity of Ethos Vegan Kitchen, a few yards down the road. For the meat-eating public, the pull will likely prove too seductive to resist. In an instant, you may find yourself inside the modern down-home confines of this "Southern Public House" imploring the comely hostesses for a table.

The latest venture by celebrity culinarians James and Julie Petrakis was so highly anticipated – arguably more so than any other restaurant opening this year – that it's resulted in carnivorous throngs prowling for service like johns in a bawdy house. With numerous accolades, a cookbook release and the continuing popularity of their Ravenous Pig gastropub, it's no surprise the joint was packed to the rafters at 6:30 p.m. on a Tuesday.

Reservations achieved at last, when we showed up we were promptly led past a ledge lined with jars filled with pickled products and seated in the main dining area amid the shuffle of servers. Ours dropped off menus, then left us alone to gawk at the sheer variety of selections, from oysters and crawfish to rabbit and duck breast. The country ham tasting ($18) was pushed, and we bit. Country ham, the South's answer to Parma, Serrano and Ibérico ham, came in three varieties here: mild Broadbent from Kentucky; salty Rufus Brown from North Carolina; and our favorite, a smoky Surryano from Virginia. The trio was served with biscuits, farmer's cheese and exquisite pepper jelly, but the most intriguing accompaniment? A pint of ham-flavored beer ($8) brewed by in-house cicerone Ron Raike. Good as the ham was, our other starter, a plate of waffle fries ($10) with chicken-liver gravy and buttermilk cheese curds, was a yawn – think poutine's poorer cousin, but with an inexplicable topping of pickled scallions.

A glass of Belgian strong ale dubbed "Shifty" ($6) helped cleanse the palate for more gratifying dishes like an ethereal grilled pork belly ($17), served with a cassoulet-like mix of navy beans, turnip greens, beer bread and pickled pears. French-style comfort was offered in the form of foie gras-stuffed quail ($17), which, surprisingly, wasn't as rich as we expected it to be. The addition of apples lent a pleasant autumn freshness, as did a side of golden beets ($10) served with hazelnuts, ricotta and wildflower honey. But it was the grilled lamb heart ($15), a dish typifying C&L's calculated foray into nose-to-tail dining, that officially stamped the evening as memorable. The lean, tender slices were intensely meaty, with the taste of iron creatively cut by pickled ramps, popcorn grits and peanuts.

Our desserts, the pumpkin cheesecake jar ($8) and fried "wit beer" doughnuts ($6), were upstaged by their accompaniments – ridiculously good pumpkin-seed brittle in the case of the former, and a jar of sublime soft caramel pudding with the latter.

Cocktails are taken seriously here as well. If you happen to enjoy a drink in the bar area, you'll notice elements of the former Harper's Tavern have been replaced by an appealing contemporary-rustic aesthetic. The historic space has seen its fair share of failed ventures since the fire of 1996, but with Cask & Larder, the Petrakises, along with chef de cuisine Dennis Bernard, are poised to make some history of their own.