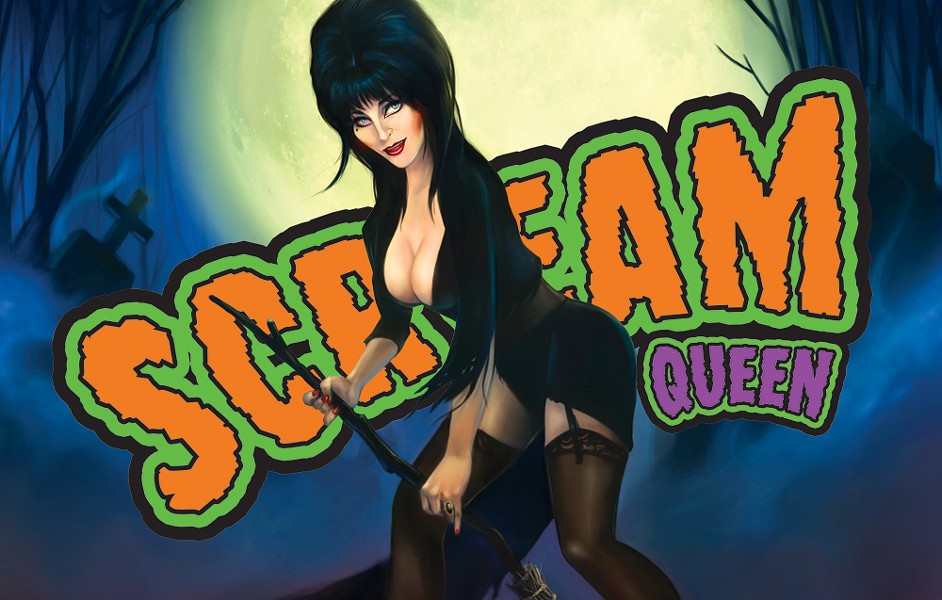 When you think of horror and Halloween icons, up there with Dracula, Michael Myers and, ahem, a hapless Charlie Brown with a bag full of rocks, there's a woman who stands taller – several heads taller, if you count the towering ebon beehive – than them all.

Elvira, the wisecracking horror host and full-on cultural icon, is instantly recognizable around the world with her graveyard pallor, Morticia Addams-gone-pinup attire, unbelievable hair and cleavage, and crucially, her unnaturally quick and self-deprecating wit. She's gone beyond her humbly haunted beginnings as host of Elvira's Movie Macabre on L.A. station KHJ-TV and become a movie star (Elvira: Mistress of the Dark), fashion and makeup designer ("I think of it as Elvira daywear"), reality TV star (The Search for the Next Elvira) and even singer (her "2 Big Pumpkins" single was released by Jack White's Third Man Records).

This Halloween, Elvira is breaking a longstanding 26-year tradition of spending the Halloween season at Knott's Scary Farms and heading out to a few horror conventions to, as she deadpans, "Show people outside of L.A. that I'm still alive!" To that end, Cassandra Peterson (the actress and comedian behind Elvira) will be holding court at the Spooky Empire Convention all weekend, including doing a rare photo op with fans on the Friday of the convention as Elvira. This is a special occasion because Peterson stopped appearing in "Elvira drag" at conventions awhile back. "I'd be in costume for five or six hours a day," she says. "Sweat running from underneath my wig and down into my makeup and my makeup ending up on my chest. It was just sad."

Despite that, don't think for a moment that Peterson doesn't enjoy doing these appearances and meeting fans. She is genuinely touched by fan interest still: "It makes me feel good about the career I've chosen, that I'm not just a paid goofball, but that I've helped people through difficult times in their lives. It's really crazy."

And fans come out in force, with all manner of stories and strange items for her to sign. Peterson recalls a fan who came to an appearance with his father's funeral urn – complete with ashes – as his dad had been a huge Elvira fan his whole life, but was never able to meet her. Without missing a beat, Peterson promptly signed the urn: "To Bill, better late than never."

It wasn't always so. Peterson and her creation Elvira started out burning the midnight oil by delivering wisecracks in her eye-poppingly ghoulish attire over Z-grade horror films on the L.A. airwaves in the early 1980s. Though there was a proud tradition of "horror hosts" emceeing bad horror movies in the wee hours dating back to Ghoulardi, Zacherly and, yes, Vampira, Elvira was an in-the-moment and larger-than-life phenomenon from the first Movie Macabre episode.

Peterson's comedic sensibility and humor chops were razor-sharp, shaped by her time in the Groundlings comedy troupe palling around with best friends Paul "Pee Wee" Reubens and Phil Hartman. Her look was the perfect blend of classic horror tropes and zeitgeist-tripping, designed with the assistance of best friend Robert Redding after the TV studio rejected an earlier look influenced by Sharon Tate in The Fearless Vampire Killers.

There's a uniquely haunted-house-on-the-Sunset-Strip feel to Elvira's aesthetic – almost a death-rock Angelyne, if you will. An enormous black hairdo influenced by Ronnie Spector's towering beehive ("She called it a knowledge bump," Peterson says), studded cuff bracelets as a nod to the punks and new wavers running wild on the L.A. streets, and a dress "as low-cut and as tight as we could get away with" were the foundations of a look that remains unchanged to this day.

Peterson remembers a "skeleton crew" (pun intentional) working on the television show, seemingly half-asleep as Elvira did her thing and the movie played. This explains the amount of boom microphones appearing in shots – one errant mic even famously hit Peterson on the head. (She begins another studio mishap anecdote with: "Speaking of sticking out ... I did have a little wardrobe malfunction and believe it or not, it was aired!")

Mishaps aside, the impact of Elvira on television was immediate; the viewing public was shocked and enthralled. "So many people have likened my show to a car wreck – like you know you should turn away but you can't," Peterson remembers. "People didn't believe what they were seeing. I didn't believe it myself."

It wasn't her appearance on Johnny Carson's Tonight Show that helped Peterson fully grasp the Elvira phenomenon – it was, appropriately, one Halloween early in the Elvira run.

"I went down to West Hollywood – every year they had this gigantic gay blowout Halloween party," she remembers. "And I get down there and half the people are dressed as Elvira and I go, 'Hey I'm on to something here!'" Fast forward to Halloween week 2018 and Elvira is very much still in demand, with a new comic book out from Dynamite Comics and some TV spots set to air. She even provides an intro to pop star Kim Petras' brand new Halloween mixtape.

Peterson, or Elvira, is relishing every fright-soaked moment of the season. "Halloween is great for kids and for adults. AND you don't have to buy stupid presents or have dinner with your relatives," she laughs. "It's all about me, me, me!"