While my search for a proper rocoto relleno ­– the punchy Peruvian pepper stuffed with alpaca, cheese, potatoes, eggs and vegetables – continues to prove fruitless, the hunt has led to some unexpected finds in the recesses of sterile suburban shopping centers. At Aji Ceviche Bar in Casselberry, a bright, spirited space unencumbered by the plaza's dreary and ponderous aesthetics, the rocoto peppers are blitzed into sauces (along with a bit of celery and ginger) that pool around the contents of their ceviches. The liquid is presented in a small shot glass to every guest right after they're seated in the hopes they'll coo at its flavors, then duly order one of the ceviches. Not sure how effective a ploy that is, given most folks are going to order ceviche anyway, but it's a nice gesture.

So, after gobbling the customary bowl of cancha in less than 60 seconds, I was happy to see more of that toasted Andean chulpe corn in the "food truck" ceviche ($16). Why "food truck," you ask? Well, owner Freddy Zubieta operated the Aji Peruvian food truck prior to opening Aji Ceviche Bar, first on South Orange Blossom Trail and then here in the former El Buzo space in Casselberry. Before that, he ran Lima 41 on Curry Ford Road, where I gushed over his pollo a la brasa when I reviewed it back in 2012.

Anyway, that "food truck" ceviche is certainly restaurant-worthy, given the gorgeous assemblage of swordfish, calamari, octopus and shrimp nestled amid cubes of sweet potato, shreds of onion and fat niblets of choclo. I got the ceviche as part of a platter ($23) that also included arroz chaufa, the Peruvian-style Chinese fried rice with chicken, as well as fried ringlets of calamari. It made an ideal, if filling, lunch – but that didn't stop me from stretching the limits of my gut by sampling some lomo saltado ($17).

This one wasn't traditionally proteined with beef; rather, this most Peruvian of dishes featured a seafood mélange of shrimp, prawns, calamari and mussels along with the starchy requisites of rice and fries. Leftovers were enjoyed later that night for dinner, as I couldn't leave the restaurant without a) finishing off the fresh mango/strawberry/passion fruit juice served in a half-liter glass carafe and b) forcefully downing a lovely mousse made from lucuma ($6), a tropical fruit with a caramel-like essence. 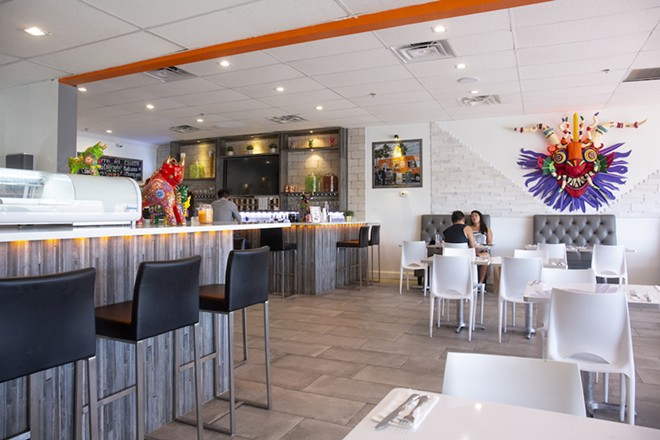 I got takeout on my next visit, a cool night that called for the cockle-warming comfort of grilled beef hearts ($12) and aguadito chicken soup ($13), with rice and potatoes in a cilantro broth. I could've stopped there but, being a glutton for nourishment, I ordered the buttery risotto blended with Parmesan and served with lomo saltado ($17) as well. OK, it was more comfort than I could handle, like a suffocating hug from an old aunt but, you know, in a good way.

Aji's menu isn't shy about showcasing the global influences of Peruvian cuisine – Italian in the case of the risotto; Chinese in the case of the chaufa and the aeropuerto ($16), a blend of fried rice and noodles with sweet-and-sour fried chicken; and, in the case of the tiradito ($12), Japan. The sashimi-style cuts of whitefish are marinated in citrus before being smothered in a rocoto pepper cream. From the Arab world there are alfajores ($6), and suspiro a la limeña ($7), a luscious ending of dulce de leche topped with meringue.

Poet Jose Galvez is credited with naming that dessert, which translates to "the sigh of Lima," because it's sweet and light like a woman's sigh. It's sweet, all right, but light? The heavy sigh my wife released after eating it said otherwise.