"Where the hell is this place?" asked my dining comrade the first time we drove the far-flung reaches of Casselberry to a nondescript strip plaza housing Wa Sushi. You'll likely doubt the redoubtable Google Maps yourself, but chances are if you're making the trek to Wa, you're well aware that out-of-the-way strip malls are rich in gems of the gastronomic kind. In the case of the Seminola Lake Center, they've got themselves a diamond in the rough in Wa, and we're justifiably jealous.

Chef-owners Hong Wong (a Hong Kong-trained sushi chef) and Jeff Hunter have been at it here for more than three years now, and they're in fine form. Weekly deliveries from Tsukiji Fish Market have become de rigueur among the better sushi joints in town, but the manner in which Wong and Hunter slice, dice, fold, curl and plate that fine catch roused us into a bit of a feeding frenzy.

Order the grand sashimi moriawase ($38) and you'll see what the drama's all about. Sure, dressing a plate with the head of a Japanese scorpion fish pierced by its own tail is a tad sensationalist, but that's the moment you'll stop and ask yourself Am I really in Casselberry? Slivers of the red, spiny swimmer (similar in flavor to lionfish, only a bit bolder) sat behind the pelvic fins, as did Japanese red grouper (aka hata), ruby-red bluefin tuna (akami), grilled Japanese madai snapper and fatty bluefin toro blinged-out with gold leaf. We also got Hokkaido uni and a shell with delightful scallops and sweet shrimp (amaebi), the head of which was fried and presented in its own plate. Did I mention fresh, tear-inducing wasabi and Tosa soy sauce (it's got bonito in it) are also part of the moriawase package? Yes they are, and it all makes for a remarkable spread. But that didn't stop us from separately ordering thinly sliced and mild Japanese goatfish ($4.50) along with an indulgence of bluefin otoro ($6.50), again glitzed and glammed with gold leaf. 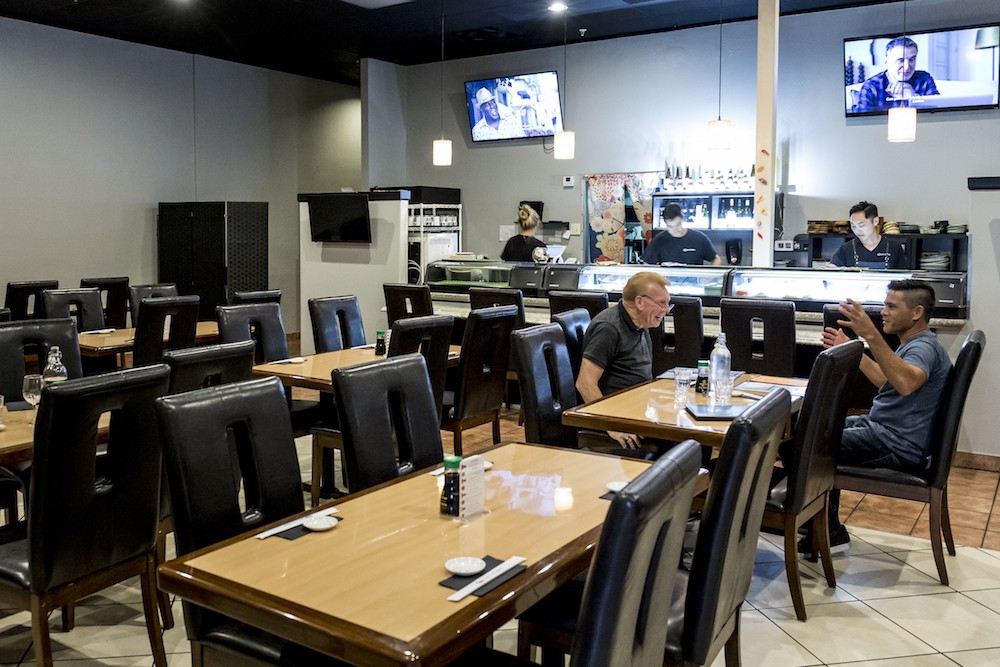 We took a breather from the showy start and sipped an aged junmai daiginjo sake from Tenryo Koshu ($30) and Hitachino's yuzu lager ($8). Both seemed to beg for a dish more peppery, so it's lucky for us a spicy miso ramen ($14) appeared on the menu as a special. The pork bone essence of the broth was liquid comfort; the pork belly not as melt-in-your-mouth as we'd hoped; and the egg more hard-boiled than soft-boiled.

While the ramen did satisfy our need for heat, another special – takoyaki ($9) – caught our eye, and the delicately fried octopus dumplings proffered revelatory pops. The hushpuppy-like outer texture enveloped a filling that was custardy-good. More octopus came in the form of a refreshing sunomono salad ($8) – it was more a deconstructed sunomono salad – with seaweed, cucumber and yuzu-anointed octopus each occupying separate areas on the serving plate.

Desserts like red-bean, black-sesame and strawberry mochi ($5) or tempura cheesecake ($8) were all fine and well, but they weren't exactly the most creative endings. No gold leaf? I mean, c'mon! Kidding aside, I wouldn't put it past Wong and Hunter to up their confection game – it seems that, in Casselberry, where there's a Wa, there's a way.