Catch up with the Pauses at Orlando Public Library this weekend

In 2012, I was one of a group of middle-schoolers at the Plaza Live to see local indie-rockers the Pauses play a show with the Majestys, dad in tow and everything. Eighth-grade me fell in love with the Pauses' playful trills, whirs and beeps, and the way the audience could interact with a keyboard that directed the images on a television near the end of the stage.

I remember notifying the trio that night (vocalist-bassist Tierney Tough, guitarist Jason Kupfer and drummer Nathan Chase) that their music sounded like ringtones, to which Kupfer responded recently, "This definitely explains why so many people are checking their phones during our shows." Tough copped to her love for working noisy and abrasive electronic music into otherwise poppy tones: "The fun part ... [is] taking those noisy elements that we love and trying to make it melodic somehow."

The Pauses always seemed to be building bridges between all of my favorite musical things – whether that be melding noisy riffs and indie melodies with a cheery disposition, or simply audio and visual media – and they quickly became my favorite band. This is truth: My most listened-to songs can all be found on their 2011 album, A Cautionary Tale, and I wore out the shirt I bought from them that night at the Plaza.

Since you last saw the Pauses in these pages, the band have been burning up the highway – from playing shows as part of the madness of SXSW in Austin, Texas, to making several East Coast runs. The SXSW mini-tour and everything leading up to it was pretty hectic for Tough, who booked all of their unofficial shows. "I'm not sure how it went or how I feel about the festival as a whole," Tough confessed, "but I did love having the ability to see so many amazing people all in one place." 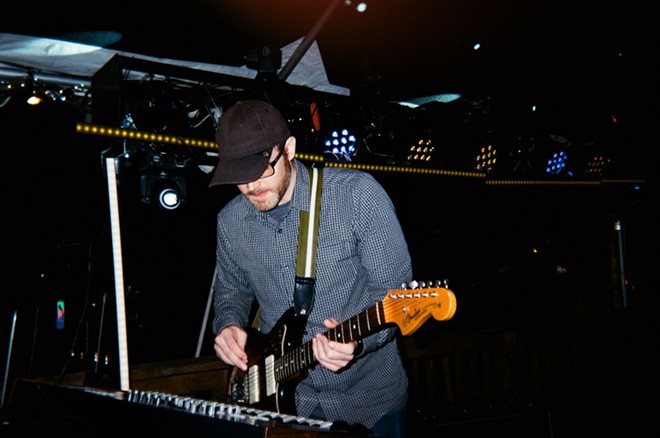 In Austin, the Pauses shared stages with show-stoppers like Five Eight, Peelander-Z and experimental pop duo Faux Real. Witnessing each of their SXSW shows as a fan of seven years, I can say the Pauses really have "come into [their] own some more," especially with the release of the definitive Unbuilding album last year, after playing music together for over a decade.

And just last week, the Pauses headed up the East Coast for shows in Brooklyn and Philadelphia. Not to mention their upcoming tours with heroes and mentors Jawbox and Built to Spill.

Between all this roadwork, the band will be playing this weekend at the Orlando Public Library's Melrose Center. This place is an incredible resource for local creatives, with access to recording and photo studios all available for free use with a library card. The Melrose hosts the performance series "Melrose in the Mix," which has featured local artists from singer-songwriter Beth McKee to rapper Sean Shakespeare.

The manager of the Melrose Center, Jim Myers, primarily books these shows and has been a Pauses fan for years, itching to get the band to play since last summer. The Pauses' blend of audio and visual stimuli – and some possible surprise guests – promise a Melrose experience unlike any other to date. Do yourself a favor and be sure to RSVP early to guarantee a seat.