The kitchen goes paleo at this caveman-themed barbecue joint 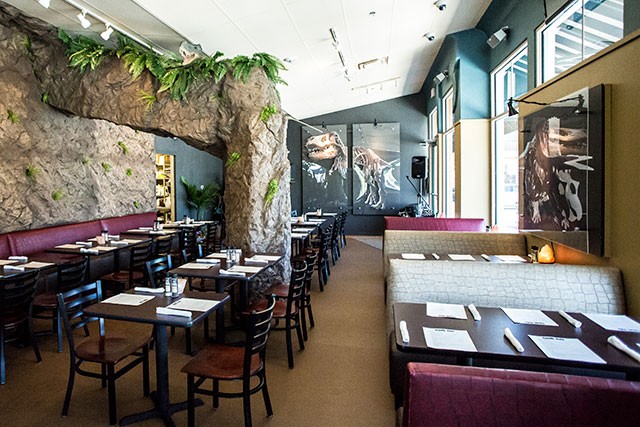 Could an establishment that accepts the help of a cable TV show often referred to as the poor man’s Kitchen Nightmares ever reach the heights of legitimacy in the eyes of a food-conscious public? Meh – I guess so. The fact that the restaurant summoned Robert Irvine and his Restaurant: Impossible crew for help might’ve been a deterrent, but our curious nature got the better of us and we decided to drive out to Winter Garden’s Cave Inn BBQ anyway. The doors propelled open for us as we approached the restaurant’s entrance, so customer service seemed to be in order. The interior? Well, there’s a dangling pterodactyl. If I need to elaborate, let’s just say the decor really plays up the Paleolithic/Jurassic theme.

Prior to opening the restaurant, owners Alan “Buzz” Klavans and his brother, Gary “Skip” Klavans, pitched the caveman-barbecue idea to the nation on Food Network’s 24 Hour Restaurant Battle back in 2010, their concept being to serve barbecue in true caveman fashion – no plates. They didn’t win, but the experience did spawn Cave Inn BBQ version 1.0, which promised “mammoth-sized portions with evolutionary tastes.” After Irvine et al. completed an overhaul three weeks ago, the result was a more focused one-page menu and what the brothers now describe as “deliciously primitive surroundings.”

Some of the servers wear shirts emblazoned with the words “Extra Saucy,” and they’re not kidding around. The flavor of the riblets ($5) was lost, thanks to a heavy slather of hoisin-barbecue sauce; however, the side of ginger slaw helped cut through the pungent topping. The mango-chili baste on the crisp chicken wings ($6) was a little more controlled, but their bland essence failed to cause a flap. The “Dino Egg” ($6), a fried orb of pulled pork and egg, was a puzzler from texture to taste. Breaking through the soft shell revealed pork that was more minced than pulled, and the accompanying barbecue sauce, sriracha aioli and mustard slaw created quite the rivalrous flavor combination.

From the list of sandwiches, a wonderfully toothsome brisket ($11) was marred by an utter lack of flavor. We liked the side of sweet potato tots, but this flavor seesaw we were on was making us woozy. The roasted turkey leg ($12) was heavily coated with the house barbecue sauce, but otherwise it was theme-park munch-worthy. Thanks to the vinegary steak sauce it was topped with, I found myself eating around the outside of the cold-smoked rib-eye ($23), then placing my focus on the chunky smashed potatoes and onion strings.

The iced tea ($2.25), as one of my dining comrades noted, was “sweeter than the stuff we’ve had in Georgia,” but more sugar was to be had in the form of perfectly serviceable coconut cream pie ($5) and peanut butter-banana-marshmallow “Ice Age Pie” ($5). There was no caramelized banana to speak of (as the menu promised), though the chocolate cookie crust did come with a hefty topping of marshmallow fluff and chocolate ganache. But the taste was a bit perplexing. Burnt? Bitter? Then it came to us. We just tasted the difference mediocrity makes.