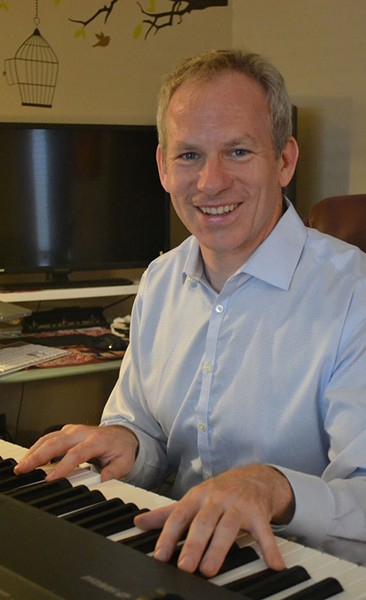 In addition to the flagship music organizations of Orlando – established groups like the Bach Festival Society and the Orlando Philharmonic – it’s worth noting a much smaller and more recent one that is shaping the city’s cultural scene from a unique perspective. The Central Florida Composers Forum functions as a platform for collaboration and networking, and provides an outlet for the performance and enjoyment of music by local composers. Bringing together some of the best local talent and emerging artists from the area universities, CF2 showcases contemporary art music and promotes community involvement.

“The idea was to play music for each other and brainstorm about how we can best meet our collective needs and wishes,” says composer and Full Sail instructor Charles Griffin, founder and first president of CF2. Just over three years ago, Griffin brought the collaborative spirit of the American Composers Forum to Orlando after being involved with the local chapter in his native New York City.

In May 2013, CF2 reached an artistic peak – a stellar collaboration with a string quartet of Orlando Philharmonic musicians. Although this particular type of chamber music has existed for a few hundred years (in 1829, Johann Wolfgang von Goethe described the string quartet as “more intelligible than other instrumental music; you hear four rational persons conversing together”) there are still new areas to traverse and modern techniques to explore, and each CF2 piece worked as a teaser for the best of Orlando’s avant-garde classical music scene. The event was made possible by an online fundraiser, proving that there is room and interest in our community for special performances like this.

An unusual exploratory performance preceded that evening, giving proof of the crossover potential CF2 has with Orlando’s larger classical music groups: The full Orlando Philharmonic orchestra played CF2 member Keith Lay’s single-movement composition Four Dimensions, featuring electronic wind instrumentalist Brian Smithers and accompanied with visuals by digital artist Nathan Selikoff on a billboard-sized LED screen. To allow his electronic score to adapt to the conductor’s musicality and timing, Lay asked Full Sail colleague Marc Pinsky to create an application by which a Nintendo Wii controller, used by the conductor like a baton, would trigger pre-produced sound events via Bluetooth. The performance, viewable on YouTube, was a fine example of the crossover kind of collaboration CF2 is nurturing.

On the horizon, CF2 plans to expand beyond Timucua and reach new audiences. “We want to be the local contemporary music scene and make that a mainstay of Orlando culture,” explains Griffin. Currently in talks with Rollins College’s WPRK radio station, he hopes to launch a program to play contemporary music and interview local composers.

For Veteran’s Day 2014, a special concert is in the works. Members will contribute music with thematic components touching on veterans’ experiences; there will also be poetry readings by veterans. The idea is to bring together music and words around the historical significance of the holiday, resulting in a community event that will speak to people outside contemporary art music circles.

Whether in the classroom, at brainstorming meetings or during performances, CF2 members are working hard to elevate their work and outreach to a level that makes them indispensable in Orlando’s cultural arena.

“There’s something about the politics of this area that overlooks the cultivation of a local voice and arts scene, but I think it is a true necessity for any city that hopes to have a future and its own personality,” declares Griffin. “We are going to be part of that local personality.”