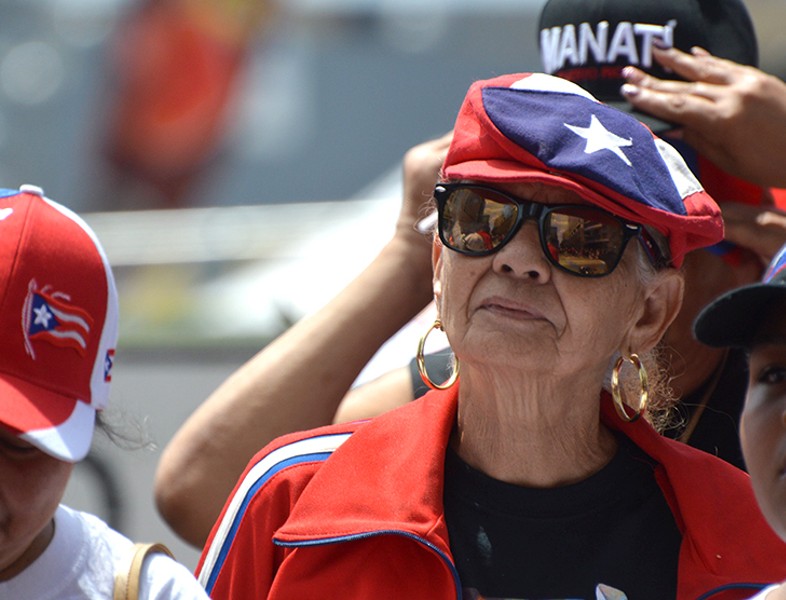 Ana Mieles wants to be buried in Puerto Rico.

She's told her children as much when she visits them every few months on the mainland. La Isla del Encanto is embedded in her 83-year-old veins, her charming style and her unchallenged status as the life of any party.

"She's always said she wants to die in Puerto Rico," her daughter Elsie Mieles-Hidalgo says in Spanish. "When she comes here, she tells us nobody is going to take her off the island. And now the hurricane has forced her out. She has to leave."

Mieles' family is one of several waiting at the Orlando International Airport for her to emerge from the last day's flight out of San Juan earlier in October. They've brought the grandmother dozens of red, white and blue balloons to try to put a smile on her face. Her daughters say Hurricane Maria devastated Moca, the town where Mieles lives, destroying her home and possessions and leaving thousands without electricity and potable water. For weeks, her children couldn't reach her on the phone. Finally, one of Mieles' daughters traveled to the island to bring her to Orlando – with blood circulation problems, Mieles couldn't risk staying.

"She's depressed," Mieles-Hidalgo says about her mother. "She's really sad because she lost everything. She's going to stay with us in Orlando, but we think she'll want to go back to Puerto Rico when she can. She's going to fight to go back."

Mieles is one of the first to come off the flight into the terminal, and seconds later, she's swarmed by her family with hugs, kisses and tears. "Puerto Rico se levanta," she says as she grips a reporter's hand. ("Puerto Rico rises.") She takes her daughter's arm and, balloons in hand, makes her way to baggage claim.

Thousands of Puerto Ricans are fleeing the deteriorating conditions on the U.S. territory that's home to 3.4 million American citizens to come to Central Florida. Like Mieles, many are staying with their families temporarily. Others, though, may need more permanent, affordable housing – a scarce resource in Central Florida.

Ray Larsen, vice president for collective impact at the Heart of Florida United Way, was one of dozens helping Puerto Rican evacuees find resources at the disaster relief center inside the airport set up by state and local officials. As of last Tuesday, the center has helped 8,290 people from 2,259 families since Oct. 3, says Cassandra Lafser, spokesperson for Orlando Mayor Buddy Dyer's office. State leaders estimate that about 100,000 Puerto Ricans will migrate to Florida in the coming months. The state Department of Children and Families had representatives in the disaster center handing out grocery vouchers and walking people through applications for food stamps, cash benefits and Medicaid. Larsen says United Way has been providing emergency housing at hotels on a case-by-case basis for evacuees who have no place to go. (* See correction at end of story.) The majority of people coming from Puerto Rico have a temporary place to stay with relatives, even if 12 people end up living in one house.

"We're only finding housing at the hotels for people who literally have no other options," Larsen says. "We don't want them sleeping in the airport. We want them to be safe."

Central Florida's affordable housing crisis runs deep. The Orlando-Kissimmee-Sanford metro area ranks third in the nation for its lack of rental homes affordable for extremely low-income residents, with 18 affordable units available for every 100 families, according to a 2017 study from the National Low Income Housing Coalition. That's about half as much as the country's average shortage of 35 affordable and available units for every 100 extremely low-income households.

Paired with Florida's minimum wage of $8.10, those who manage to find housing are often severely cost-burdened, which means they spend more than 50 percent of their income on housing. In the metro Orlando area, the study shows 82 percent of extremely low-income households fall into this category.

Larsen says his and other nonprofits are waiting for a plan from state and local officials.

"There was a shortage of affordable housing before Maria, and now with the evacuees, there's just more pressure," he says. "I know there's a conversation in the community and at the statewide level about intermediate and longer-term housing, but I don't think we have a plan yet as a community about that."

Orange County Mayor Teresa Jacobs has been hosting several workshops this past year looking for solutions to the region's affordable housing crisis. But the mayor says that while the county has been able to manage requests for assistance, providing long-term support – such as temporary housing – for evacuees from another community is beyond the means of a local county's ability, and more in the wheelhouse of state and federal leaders.

"We're looking to the state and the federal government to determine what type of housing they're going to help us provide because it's really a federal issue rather than a local issue," she says. "We're kind of the boots on the ground. We know we have a role in this, but we need to get that direction from the federal government in terms of some kind of evacuation housing that might be necessary. Right now it's going well, but it could become a challenge for people coming over from the island."

"The state is the determining entity in exploring what housing solutions would be best applied for this situation," she says in a statement. "The state of Florida's direct relationship with FEMA should guide that discussion and, if needed, expedite resources being deployed."

When asked about affordable housing for those coming from Puerto Rico, Gov. Rick Scott's office didn't provide a detailed plan.

"The state of Florida is fully committed to doing everything possible to help families affected by Hurricane Maria, both in Puerto Rico and here in Florida," says McKinley P. Lewis, a spokesperson for Scott's office, in a statement. "State emergency management officials are actively working with state and local partners and have been coordinating with FEMA. We will continue to work relentlessly with all our partners to make sure all appropriate resources are made available to Puerto Rican families displaced by the storm."

Officials with the U.S. Department of Housing and Urban Development did not respond to questions about their housing solution for the region.

Florida Sen. Victor Torres, D-Orlando, who still has family and friends on the island, is worried by reports of contaminated water and rampant disease as Puerto Rico struggles to recover. On the issue of affordable housing, Torres says he and other representatives have asked the governor to make sure that housing is included as part of the plan to help evacuees.

But Torres also says the Legislature wouldn't be in this hole if it had properly spent money allocated each year for affordable housing. The Miami Herald reports that since 2008, state lawmakers have diverted nearly $1.3 billion out of the $1.87 billion from the William E. Sadowski Affordable Housing Trust Funds collected from real estate transactions. The funds are meant for state and local housing programs, but lawmakers have redirected them to tax breaks or other spending.

"Affordable housing is still up in the air," Torres says. "We need to build more units – bottom line. You have working-class citizens who can't afford high rents, people living off of 192 in hotel rooms. We've been talking about this for years, but nothing ever has been accomplished. You have the Sadowski funds for affordable housing that we haven't been using for that. And what do we have now, in times of dire need? We need to help these people coming over and make sure they're taken care of."

* After publication, we changed the phrase "two-day and three-day hotel vouchers" to "emergency housing at hotels on a case-by-case basis." This was to reflect the fact that there is not a voucher system in place, but rather that evacuees' individual situations are being evaluated for assistance.