CFCArts opens ‘Songs for a New World,’ their first indoors show since the pandemic began

As the pandemic approaches the one-year mark, I've been covering how Orlando's theme parks and professional theaters have invested in upgrades allowing them to revive their live performances. But can less well-heeled community theaters, which play an important role in the local arts ecosystem, also survive the restrictions of social distancing? For a possible answer, look to Central Florida Community Arts, which opens Jason Robert Brown's Songs for a New World this Thursday, Feb. 4.

CFCArts has remained active throughout the crisis, performing virtual cabarets and outdoor concerts in the Central Christian Church's courtyard, but this is their first production back inside their black box theater. I stopped by before a recent rehearsal to learn from director Dane Becker how CFCArts is mounting a COVID-conscious comeback on a community theater budget.

A Long Island native and graduate of the University of Cincinnati Conservatory of Music, Becker had been performing at multiple Orlando attractions for the past three years before the pandemic hit. As CFCArts' new theater coordinator, Becker came aboard for the courtyard concerts and is now helming their stage's grand reopening. Ironically, he might never have connected up with CFCArts if the theme parks hadn't closed; CareerSource Central Florida placed him (and a number of other unemployed artists) with local companies as paid interns using grant funding.

"I think we've had so much taken away from us in this past nine months that to be able to come back and just do theater again was largely really, really exciting," Becker says, joking that he was drawn to Brown's contemporary song cycle for the stage's grand reopening "because we kept saying the phrase 'in this new world that we're living in.'" According to Becker, Songs for a New World is about the "desire to be a part of something, whether it be connection, whether it be having a place in society, whether it be equality," and those tender topics now "all have very different meanings throughout this pandemic."

Obviously, the pandemic has also had more practical impacts on the physical production. Attendees will enter the auditorium from outdoors instead of waiting in the lobby, and will be seated in small clusters with six feet of separation between parties. Additional heath and safety measures have been installed throughout the building, thanks to the financial support of local government.

"We're grateful for the assistance of CARES administered through Orange County towards the health and safety protocols for the theater, like HEPA filters, a sanitizing fogger and hand sanitizer stations," says Joshua Vickery, founder and executive director of CFCArts.

Audiences at Songs for a New World will be masked, as will the singers, who have special plastic inserts that provide extra airflow. "We spent a lot of time experimenting with what masks were going to work best for the production," explains Becker. "We settled on this because we liked the cloth mask [with] the ability to cover the full face and still contain the nose and the mouth. But we also wanted to honor the ability to have space for the singers to sing and articulate."

One might imagine that wearing masks might make it difficult for the actors to emote, but Becker welcomed the challenge.

"I actually think it's forced us to become stronger storytellers," says Becker, "[because] you can't just stand there and sing it ... you have to be fully invested into what you're saying, and using the other parts of your body to tell that story." He says creating socially distanced stage blocking and trying to find ways to connect actors without having them touch has been "a really unique thing."

Aladdin Demps, a Volusia County middle school theater teacher appearing in Songs for a New World, echoes Becker's observation: "The actors have come to a place where we're putting so much into our eyes and our voices and our bodies that it's unnecessary almost to touch; it almost becomes too much."

A fan of Brown's musical since age 15, Demps was initially hesitant to perform, but says they were reassured by the Zoom-based auditions that CFCArts "care[s] about their performers, and I know that they take things like this seriously."

As opening night approaches, Demps has "all the feelings," including "a little bit of trepidation, of fear, because we're worried, will audiences feel comfortable coming out to see it? We feel so good about the show, and it's such an important message that we want it to be seen. So we're all very like excited, and we're kind of chomping at the bit to get an audience in here." 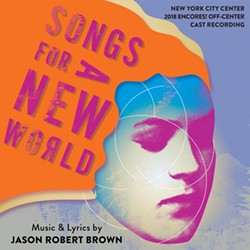 Becker adds that he's especially excited for audiences to experience the ending, in which [spoiler alert] the cast sings, "We'll be fine" with the American flag in the background. "I just think that there's so much power in looking at four actors who are masked, to an audience that's fully masked with all the PPE protection that we've done, saying, 'We're going to be OK. We're gonna get through this."