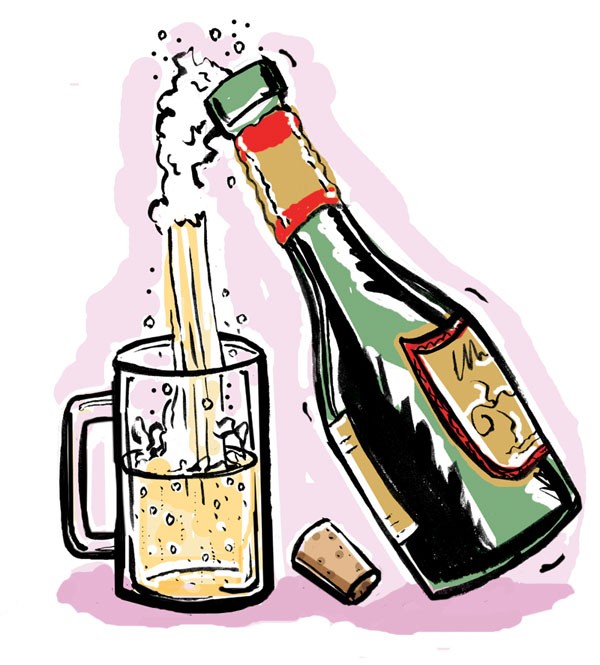 Tiny bubbles titillate. There’s something mesmerizing about watching liquid confetti flood a tall, fluted glass. (It’s hard to describe, but “sensual” comes close.) Inexpensive sparklers double the effect, with the added rush of scoring a bargain completing the moment. And now, thanks to the growing popularity of bubblies in other countries and the recession, deals on quality juice are more prevalent. Even French champagne prices have dipped to relatively affordable levels, but fierce competition from Spain, Italy, the United States and French non-champagnes has arisen. So perhaps it’s difficult to argue that the Real French Thing is the best for the money.

The main difference between some sparkling wines and champagne begins with how the carbon dioxide bubbles are birthed. All fizzy wines experience two fermentations: one to ferment the grapes to produce wine, and another to create the fun bada-bing. Besides the cost of the fruit, the price of bubbly often hinges on the second fermentation: Méthode Champenoise or not? By law, all French champagnes and Spanish cavas are required to travel this avenue. Méthode Champenoise (“made in the method of Champagne”) involves pouring regular “still” wine into the heavier, “Champagne-style” bottle, then adding yeast and sugar to create carbon dioxide (the bubbles!). The whole time-consuming and expensive process occurs in the same bottle that ends up on your table, meaning these wines will be slightly pricier. The label will read Méthode Champenoise or “fermented in the bottle” if the winemaker used this traditional process.

The other second-fermentation approach, called “Charmat” – or a decidedly unromantic moniker, “tank method” – involves adding yeast and sugar to a vat of wine and covering it tightly, thus mimicking the traditional environment for the second fermentation. Italy’s prosecco is made in this fashion, creating a fruitier, softer sparkling wine with fewer bubbles. But that doesn’t mean it isn’t delicious: The Italians have come a long way with prosecco in the past several years. They might even have shucked their woeful “Asti Spumante” reputation.

Prosecco is the name of a perfumey grape as well as the sparkling wine. Shopping by producer name, DOC or DOCG status (listed on the label), or specific region is imperative. The best prosecco grapes grow in the Veneto in northeastern Italy, in a designated region called Conegliano and Valdobbiadene, but there are millions of questionable-quality bottles bearing the prosecco name. Look for that region and you’ll be golden.

Cava, named after the caves in which this sparkling wine is stored, is Spain’s thankfully inexpensive solution to champagne. Cava’s flavor can be earthier and a bit stronger, because indigenous macabeo, parellada and xarello grapes, and on occasion the traditional French grapes, chardonnay and pinot noir, are used. Tightly regulated under Spanish wine laws, cava is principally produced in the Penedès region of northeast Spain.

Legend says a French monk named Dom Pérignon discovered the champagne process hundreds of years ago, and France has been controlling the name ever since. The designation “champagne” can only grace wine hailing from its namesake region, although plenty of U.S. wineries have hijacked the term (Korbel’s “Chardonnay Champagne” being one of them). And the French are not only territorial with other countries using their name – if produced outside the Champagne region, even other French sparkling wines must be called “crémant.” To be fair, genericizing the term “champagne” – à la Kleenex – is commonplace, but the Champenoise do merit bragging rights; their bubbly possesses a distinct, minerally flavor profile unattainable from other regions. If you can afford it, go for it.

A few pointers for your sparkling wine enjoyment:

1) American and French labels list the sweetness levels of their juice (from driest to sweetest): brut, extra dry or demi-sec.

2) Non-vintage (NV) indicates that a blend of juice from two or more years was used, a very common practice in sparkling wines. Winemakers sometimes “declare a vintage” when they feel the wine is exceptional. But beware: It frequently adds mucho dollars to the cost, but not necessarily enjoyment.

3) The best way to chill sparkling wine is to place the bottle in a bucket filled with half-water, half-ice, and a handful of salt. It only takes about 20 minutes.

4) A higher-quality sparkling wine will have smaller bubbles that flow up from the bottom of the glass.

5) In the unlikely event that you have leftover bubbly, you don’t have to own a fancy pressurized stopper. Simply suspend a spoon (sterling silver is more glamorous, but stainless steel works too) in the opened bottle and it will stay tasty and fizzy for up to 36 hours. Don’t ask me how it works, but it does.