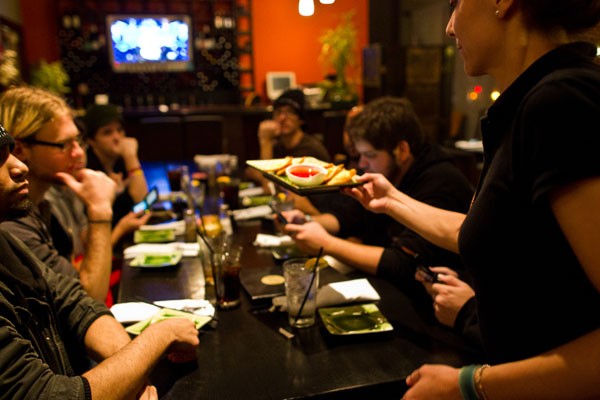 After my recent experience sampling the, um, "international cuisine" at Rooster's Club N Global Grille, I'll admit I was a little wary of stepping into a restaurant serving dishes from more than one country. Not only did Chi purport to serve pan-Asian fare, but it broadened the usual definition of the term to include Turkish dishes as well. Turkish! OK, by virtue of Turkey being in Asia - most of it, anyway - Turkish food is technically "Asian." It's also widely considered to be one of the three great cuisines of the world along with French and (Chi's other major offering) Chinese.

Sitting down in a plush booth amid a high-ceilinged, serene and urbanely appointed dining room, we apprehensively scanned the lengthy bill of fare, which only served to prick the still-healing scars of restaurant past. Our server made every effort, language barrier and all, to assure us that the dishes we considered were all good, even the Turkish items prepared by their very own Turkish chef. With two chefs in the hothouse - each dedicated to his respective cuisine - our approaching meal didn't seem as precarious a venture.

Indeed, when the West Lake Beef Soup ($6.95) arrived, its golden broth thickened with cornstarch and egg drops, hope sprang ephemeral. The heady punch of cilantro mixed with tofu and beef shreds gave the soup (named after a lake in Hangzhou, China) simultaneous light and comforting qualities. Even the steamed vegetable dumplings ($4.95) packed with cabbage, celery, carrot and shiitake mushrooms bolstered our confidence in the kitchen's abilities, but it was the Turkish mixed grill ($29.95) that would make or break our opinion of Chi. Then we learned that the Turkish chef was on vacation for a couple of weeks and that they were making do with the kitchen staff on hand.

When the enormous kebab platter arrived and the sight of fat morsels of chicken, beef, lamb and shrimp set our glands a-salivating, we saw it as a good sign. It turned out the visual succulence had flavor to match. The seasoning on all the meats was impressive, even if the beef wasn't as tender as it could've been. Red-onion relish, grated carrots and shredded red cabbage with lemony hints were Turk-true, as was the rice stringed with vermicelli in the Middle Eastern style. Tzatziki sauce and sumac powder were also offered as garnishes, all of which served as a completely unexpected surprise.

If Turkish cuisine wasn't this chef's specialty, we figured we'd try a dish that was. Crispy Peking duck ($18.95) glistened on a plate sided with mu shu pancakes, hoisin sauce, cukes, scallions and a hand-carved radish flower. "The best Peking duck I've had so far," my dining partner gushed, and I couldn't  really argue.

As odd as it was to have Turkish coffee ($2.95) and baklava ($6.95) afterward, I'd be lying if I said I didn't enjoy it. Maybe the baklava was too dense and weighty, but the accompanying red-bean ice cream made up for it. Lychee fruit topped with cream ($4.95) presented a lighter, simpler and decidedly more "Chinese" option.

While well-executed Chinese-American favorites comprise a good chunk of Chi's menu, offering good Turkish food - particularly the kebabs - was an added bonus. Judging from our experience, Chi is no flash in the pan-Asian dining scene.