Chiptune band Anamanaguchi on their lapsed connection to video games 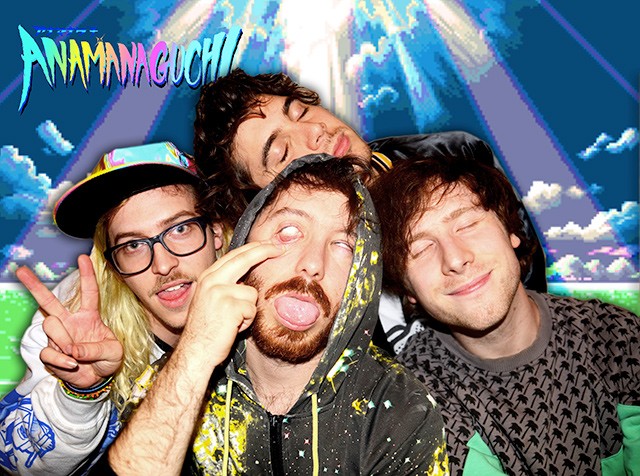 Everybody has a pet peeve. For Anamanaguchi, it’s these four words: “Mario at a rave.”

In a previous article [“Onward pilgrim,” April 2011], I talked to Ary Warnaar, the New York City quartet’s guitarist, and he expressed an intense distaste for that phrase – one that chiptune musicians use among themselves to poke fun at what listeners say after hearing their music.

Thing is, it’s not entirely a joke, as Google searches show people do actually employ it when discussing this band, who uses modded 8-bit video game consoles (specifically, a Nintendo Entertainment System and a Game Boy) to generate their most distinct sounds.

When I spoke to Anamanaguchi drummer Luke Silas recently, it became clear that the group’s shared disgust for the phrase hasn’t dissipated over time. But still: Have they been able to escape or avoid being likened to “Mario at a rave” in the two years since?

“Well, it’s pretty difficult. It’s problematic when [chiptune is] still a very niche thing,” Silas says. “When you’re part of a culture like this, it sucks to get relegated to something so simplistic. It just doesn’t say what it actually is.”

That last “it” could refer to one of two things (or maybe both). In the first possibility, he means chiptune (aka chip music), the school of sound that’s slowly transitioned from a hobbyists- and small-bands-only palette to one occasionally borrowed by non-chip-oriented musicians like the Postal Service, Crystal Castles and the Killers. Alternately, Silas means Anamanaguchi’s music – a beatific, colorful-as-a-springtime-garden take on Weezer-like power-pop (with shades of prog rock in there, too).

Regardless of whether it’s option A or B, chiptune and, by proxy, Anamanaguchi remain deeply associated with video games – a connection the band wants to downplay so their music can take the podium on its own merits. As Silas discusses the “Mario at a rave” issue further, he mentions that things have been improving, especially with the May release of Endless Fantasy, Anamanaguchi’s second full-length.

“With this record, we have the ability to make a much clearer mission statement about ourselves. We can tell people, ‘This has nothing to do with video games. [This] is a much bigger and deeper thing than video game nostalgia,’” he says.

But even as they’ve attempted to shake the “video game band” albatross through interviews and grand concoctions like the 22-track-long Endless Fantasy, Anamanaguchi still have definite ties to the gaming world. They’ve played the Penny Arcade Expo gaming conventions on multiple occasions, and, more glaringly, scored the Xbox 360 and PlayStation 3 title Scott Pilgrim vs. the World: The Game in 2011. Silas gives a dense, deliberate response when posed with a question about whether or not that assignment was a step back for Anamanaguchi’s long-term image.

They thoroughly discussed the decision to soundtrack Scott Pilgrim and have nothing but good things to say about the experience, but looked at this project as making music that’s separate from their ordinary work, which is why they’ll never play the score live. It wouldn’t provide the right experience.

“To answer your question, yeah, we could see it as a step back, but at the same time, it was giving us a platform to expose ourselves to a lot of people who – for one reason or another – would enjoy us,” Silas says. “It’s not like we are going to say, ‘Well, there’s absolutely no connection between us and video games ever,’ because no chip musician can really honestly say that, but we try to be mindful of it.”