Church and Trump: Evangelicals hold their noses to get what they want

In front of the illuminated columns of the Supreme Court Building, the Rev. Patrick Mahoney and several other Christian activists were gathered together, waiting for Donald Trump to announce his pick for Supreme Court justice – a spot left vacant for nearly a year after Republicans refused to acknowledge Barack Obama’s nominee.

When Trump announced Colorado judge and possible teenage fascist Neil Gorsuch, perhaps best known for his Hobby Lobby opinion that showed a willingness to protect discrimination based on sexual orientation, Mahoney and his small crowd rejoiced.

Mahoney called on his followers to kneel down at the steps of the courthouse, declaring it would be “the first public prayer” for the new nominee. But someone beat him to the punch.

“God help us all!” a man yelled from the back of the growing crowd of protesters.

It was an appropriate first public prayer upon the appointment of Gorsuch.

Thrice-married and adulterous Trump, not known for turning the other cheek, was not an intuitive choice for the religious right, which has spent the past several decades attacking the personal morality of political candidates and claiming God sends catastrophes to nations to punish their citizens for sexual deviancy.

An old joke usually told about the late, lecherous and notoriously racist South Carolina Sen. Strom Thurmond might capture the initial religious perception of Trump’s position on their core issues.

Trump’s secretary calls through and says, “There’s someone on the phone who wants to talk to you about the abortion bill.”

“Just tell her I’ll pay it,” he replies. 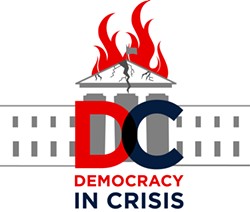 Trump’s louche opportunism is one reason that many on the religious right backed the otherwise universally reviled Ted Cruz, proving perhaps, as, uh, 1 Corinthians puts it, that God, or at least his followers, “chose things despised by the world.”

But eventually they got behind Trump, even if it meant admitting their concerns with personal morality were actually nothing more than Machiavellian hypocrisy. Trump would repay them by appointing, in Mahoney’s words, “the justice who would help overturn Roe v. Wade.”

“This is the reason why so many went out, passed out literature, held signs, made phone calls,” Mahoney said. “We knew the critical importance of this moment, and so we gather here tonight and we feel the first thing to do is to pray. We are going to ask God to lead and direct Judge Gorsuch. We are going to ask that his confirmation hearing run smoothly.”

The Democrats are the worst opposition party imaginable, so Jesus probably won’t have to work too hard.

The day after the announcement, Trump encouraged Senate Majority Leader Mitch McConnell to “go nuclear” and lower the number of senators required to confirm a justice and end a filibuster from 60 to a simple majority. Democrats are already counseling each other to save their political capital for the next fight, instead of trying to force Republicans to use a little of their political capital. Right now, the Democrats have so little capital that there may be no next fight.

But Trump seems to know the evangelicals will fight – according to Pew, 81 percent of white evangelicals voted for Trump, more than for George W. Bush, John McCain or Mitt Romney – and he is rewarding them handsomely.

On the same day he announced his Supreme Court nominee, Trump named Jerry Falwell Jr. the head of a task force on higher education. He described Falwell as “one of the most respected religious leaders in our nation."

Falwell’s Liberty University may be slightly more rigorous than Trump University, but the announcement signals a shift from teaching the fundamentals of critical thinking toward teaching a fundamentalism that is critical of thinking. Liberty’s Center for Creation Studies aims to “research, promote and communicate a robust young-Earth creationist view of Earth history” based on “sound Biblical interpretation.”

Two days after his court announcement, the tension between Trump’s personal vanity and his commitment to enacting religious policy reached its apotheosis when he spoke at the National Prayer Breakfast.

Trump made headlines by using prayer to diss the current ratings of his former NBC show, The Apprentice. ("The ratings went right down the tubes. It's been a total disaster," Trump told those in attendance. "I want to just pray for Arnold, if we can, for those ratings.") Trump is still listed as a producer on the show, so he likely stands to profit from improved ratings. Still, nobody at the breakfast seemed to care because Trump also promised to “get rid of and totally destroy” the Johnson Amendment, which prohibits tax-exempt nonprofits, like churches, from participating in political campaigns, directly or indirectly.

Falwell Jr. said the elimination of this amendment – the eponymous Johnson was LBJ – would “create a huge revolution for conservative Christians and for free speech.” It would free churches to further support Trump so he could further support them.

Such collaboration between church and state is not uncommon for authoritarian strongmen. The “Punk Prayer” that landed members of the Russian activist group Pussy Riot in prison was an attack on the close relationship between Vladimir Putin and the Russian Orthodox Church.

In a final scene from last week’s apocalypse, anonymous sources told Reuters Thursday that the administration wanted to rechristen the "Countering Violent Extremism” program "Countering Islamic Extremism" or "Countering Radical Islamic Extremism.” Along with the name change, the program “would no longer target groups such as white supremacists who have also carried out bombings and shootings in the United States.”

That would mean Dylann Roof, who sat and prayed with nine African-Americans before he murdered them in their church, would not be considered a dangerous extremist. For nationalists, the message is clear: It is not only about Christianity. It is about whiteness and ethnic nationalism.

Not everyone is blind to this. On the night of Gorsuch’s nomination, at the Supreme Court Building, Mahoney and his associates knelt and ostentatiously prayed the second public prayer over Trump’s appointee.

“So father, we commit him to you and we are thankful,” Mahoney said as the growing crowd around him drowned out his words, chanting, “Black Lives Matter.”