Much of the country celebrated Christmas in shorts this year, the warmest year on record across the globe. While droughty California became ever more parched, Texas and Oklahoma were rocked by floods in their wettest May ever; in August, verdant Washington was blanketed in smoke as it burned through the most wildfires the state has ever experienced. In March, the first of the inevitable lawsuits was filed by a health worker infected with Ebola when that virus leaped borders to reach the U.S.

In feverish prose, Watkins summons up a Southwest desiccated and mostly deserted, being slowly swallowed by a growing, moving mountain of sand. Luz and Ray, squatters in an abandoned Laurel Canyon mansionette, take possession of a strange child they call Ig ("bulb-headed, coin-eyed, translucent-skinned") and decide they must escape the weird languor of their existence. Los Angeles having been reduced to a dangerous barter town barely kept going by government-distributed water (never enough) and all the "ration cola" they can drink, they strike out for a better life, though mostly unconvinced even in the going that one exists.

The book is worth reading merely for the beauty of Watkins' language, the specificity of her imagery and the acuity of her observations. But the highest achievement in Gold Fame Citrus may be Watkins' opting-out from the disaster-as-metaphor dodge most other novels of the genre I've read indulge in. Unlike Black Moon's or Find Me's pandemics, unlike the mysterious environmental incident at the heart of the Southern Reach trilogy, the death of the land in Gold Fame Citrus is unambiguously addressed rather than presented as a disaster in situ – laid at the doorstep of not just corrupt officials and short-sighted stewardship, but of every citizen with his or her head buried in the sand, denying the reality of what's happening around us. (Apt justice, she buries those heads quite literally in sand.) 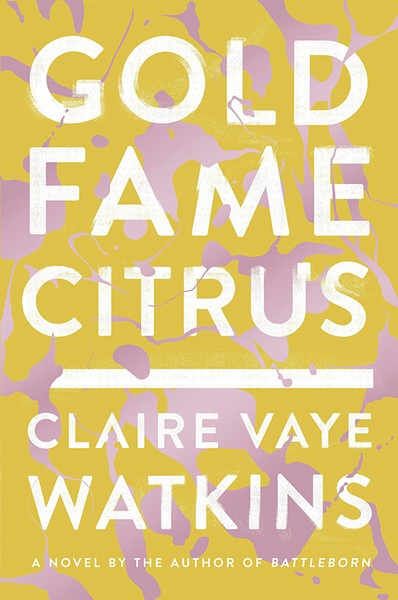 Lately, Watkins has emerged as a clarion voice outside her fiction practice. Her towering, furiously felt essay "On Pandering" on the Tin House blog last month was one of the best of the year, so widely clicked and forwarded that it repeatedly crashed Tin House's site in the first few days it was up. More to the point on disaster porn, however, was a quote from a September interview in Vogue magazine. Discussing Kathryn Schulz's terrifying (because nonfiction) story in The New Yorker about the Cascadia fault line, Watkins calls out "this phenomenon that we kind of lazily call postapocalyptic or dystopian narrative":

"We pretend that we are interested in them because we're facing the hard truth about our existence, but they are in fact escapist forms of art. ... It's actually quite comforting to think that you might be a survivor of the apocalypse. What that means is you've reached the end of humanity. Like you're the pinnacle. Like you're the last most important person, when the reality is you just die and go to dust and the earth will not care about you."

Ouch. But yes: Watkins demolishes the soothing self-deception that watching The Walking Dead will prepare us to survive the zombie apocalypse, and is thus in some small way a responsible form of entertainment. She reminds us that (a) the apocalypse is already upon us, and (b) statistically, it's unlikely you'll survive it, so taking notes on how to construct an early-warning system from clothesline and tin cans is nothing more than a displacement activity.

In the end, Gold Fame Citrus swerves from its perspicacious doominess, transmogrifying from environmental cautionary tale to yet another story of a prophet and his harem. We've all heard, in fiction, film and the news, that old (but sadly not untrue) saw of a damaged visionary squandering his powers of perception for nothing more than the devotion of a hand-picked group of female acolytes and the ability to banish other men. Is this truly an inescapable tendency, inborn to man, this squalidly predictable fantasy of domination? If so, it's as depressing as humanity's ability to ignore our own mass extinction.