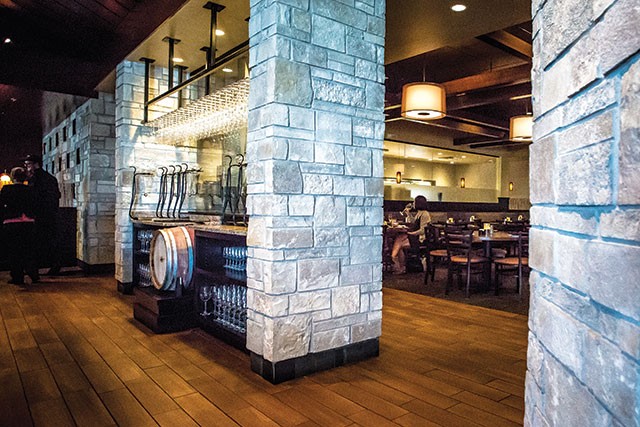 Just when it seems like we’ve taken steps to transform the culinary consciousness of this city, a place like Cooper’s Hawk comes along, yanks us by the ear, turns us around and puts us face-to-face with our not-so-distant past, then gives us a talking-to: “Culinary cachet? I’ll show you culinary cachet!

This city was built on the almighty chain, you mutinous agitator! Run all you want, but we’re here to stay.” Indeed, this wine-centric restaurant chain based in the Midwest halts our forward progress – not because their food is egregiously subpar or their wines offensive, but because their food and wines are wholly unexceptional, and that’s the worst offense a chain can commit. For all its “Napa-style” atmo, the restaurant’s “something for everyone” slant in both menu and wine offerings isn’t so Cali-inspired.

To be fair, the restaurant is located in the Waterford Lakes Town Center, and upscale dining options in the UCF corridor (or “upscale-casual,” as Cooper’s Hawk is officially, and oxymoronically, defined) are few and far between. If there is a silver lining here, maybe it’s that Cooper’s Hawk is narrowing that gap. The entrance, for example, takes a page from Cracker Barrel’s playbook, but wine-country-fies it for a more dressed-up clientele: We passed by retail displays hawking wine, wine paraphernalia, various edibles and such on our way to the hostess stand. To the right was a long bar packed with folks partaking in a wine tasting ($7 for eight pours) prior to dinner.

Cooper’s Hawk ships grapes from California, Oregon, Washington and elsewhere to their winery just outside Chicago, where they produce nearly 50 varietals. The restaurant, naturally, only sells its proprietary wines, with pairing suggestions listed on the menu. Regrettably, their flight of higher-end “lux” wines ($15.99) revealed a watery malbec, a too-sweet pinot noir, and a satisfactory meritage and cab. (Note: Servers will assume you don’t know anything about wine, so if you fancy yourself a connoisseur, prepare to hear a spiel on the basics.)

That said, we found no fault in the nicely crisped Caprese flatbread ($8.99) and actually quite liked the chicken al pastor stuffed mushrooms ($9.99), save for the fact we couldn’t taste the mushroom. Mains, like soy-ginger salmon ($20.99) served with a crunchy slaw and wasabi mashed potatoes, neither impressed nor disappointed. The salmon was a smidge overdone, and the potatoes had nary a hint of wasabi flavor, but all else was thoroughly satisfactory. The best dish we sampled was the gnocchi with roasted butternut squash ($15.99). The brown butter sauce with a hint of earthy sage helped balance out the sweetness of the squash. Braised short ribs ($22.99), on the other hand, weren’t braised nearly long enough. The fatty cubes in this “signature” dish were as tough as they were dry. On the sweet side, the banoffee pie ($6.99) was an over-the-top number with a banana-toffee filling, graham-cracker crust and whipped cream. By comparison, Key lime pie ($6.99) was a more subtle, yet utterly smackless, option.

Still, there appears to be some magic in the Cooper’s Hawk formula. The place was packed on Saturday night, which bodes well for their soon-to-open I-Drive locale. Bringing their monolithic concept to the chain capital of the universe was an obvious no-brainer, but much like the wine we sampled, there’s little to no semblance of character.