BBC production about post-World War I gangsters is surprisingly addicting 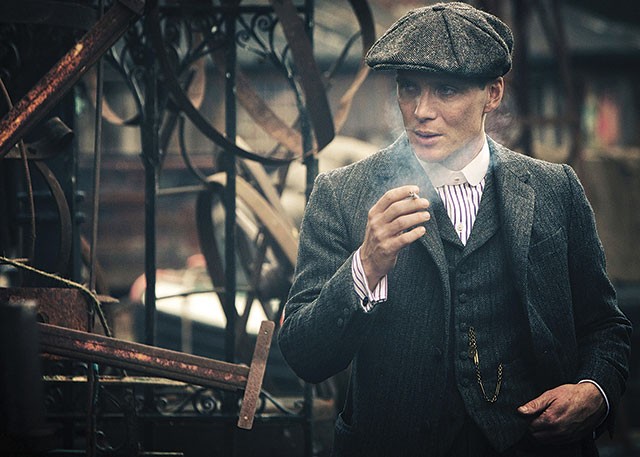 Let’s tell the truth: I found the name so enthralling that I was going to watch this series (a BBC production streaming on Netflix) regardless. It was just a bonus that, rather than some animated BBC knockoff of The Boxtrolls or The Borrowers, Peaky Blinders instead features a raffish bunch of post-Edwardian gangsters. And when, after a short and blindingly beautiful cold open, the first episode’s opening credits rolled to Nick Cave’s “Red Right Hand,” I was hooked. (The title refers to the gang’s practice of sewing razor blades in the brims of their flat caps, the better to take an eye out or bloodily widen a smile in a fight.)

Cillian Murphy stars as the leader of the Shelby family, an enterprising Birmingham clan of strong-arm enforcers. In 1919, the Shelby men have just come back from World War I to take up the reins again. Aunt Polly, played with a sly dark heart by Helen McCrory, has had to take a step back from keeping the bookmaking operation running during the war; in the interim, sister Ada has run wild, stepping out with a strike-fomenting Bolshevik (“the only man ’round here not afraid of my brothers”). Murphy, as family leader Tommy Shelby, is haunted by scenes of the trenches of France, smoking opium at night to quiet the nightmares but possessed of an icy stillness by day, as he plots to take the Shelbys from small-time thugs to big-time criminals to, eventually, legal bookmakers.

Sound familiar (cough Godfather cough)? Well, sure. There are only so many crimeland-tale permutations of double and triple cross, internal struggle and betrayal, tactics and strategy. It’s the acting and the visuals – and sometimes the soundtrack, as Martin Scorsese has proven – that make a show rise above mere genre, and Peaky Blinders delivers on all three counts. Theme song “Red Right Hand” isn’t the only asynchronous music here: A bloody razor fight unfurls against the Raconteurs’ “Blue Veins” and bits of White Stripes songs crop up repeatedly. George Steel’s cinematography is stunning; several freeze-frame-worthy scenes resemble paintings by Constable or Caillebotte. And in a cast stuffed with talent – McCrory, Sam Neill, Tommy Flanagan – Cillian Murphy’s aura of brooding menace leavened by brief, scary flashes of fierce high spirits is metonymic of an entire shell-shocked British generation. (The first six-episode season of Peaky Blinders is available on Netflx now; a second season has begun airing in the U.K., but no U.S. date has been announced.)