CPAC in Orlando was full of sound and fury, a tale told by nationalists, signifying — what, exactly?

While a four-day lineup of conservative politicians, pundits and Fox News favorites discussed the future of the Republican Party inside, hundreds of grinning, maskless right-wingers gathered outside to proudly proclaim their support for former President Donald Trump — who was scheduled to make his first public speech since leaving the White House on Sunday.

On Saturday, "Stop the Steal" architect and longtime Trump ally Roger Stone was met with warm welcome by the mostly maskless jubilee of Trump supporters. Stone was even caught dancing to a pro-Trump rap on Saturday, in front of a pickup truck painted with an unrealistically ripped version of Trump on its side.

Orlando Weekly photographer Dave Decker caught neo-Nazi Nick Fuentes, an extremist who was in town for another explicitly white nationalist conference, getting kicked out of CPAC Saturday afternoon for not wearing a mask.

On Sunday, the maskless propaganza — featuring a multi-racial, redpilled motley crew of Trump supporters — continued. Outside the Hyatt Regency, a local conservative named Todd (who identifies more as an independent constitutionalist than a Republican) told Orlando Weekly that he was primarily out there on behalf of protecting free speech and the right to bear arms.

When questioned about the storming of the U.S. Capitol last month — a touchy, and controversial point of discussion among conservatives, depending where you fall on the right wing of the political spectrum — Todd was adamant in his belief that the whole thing was a set-up. "I think Antifa was the first ones [sic] going in there," Todd said, insisting the riot was a sham, organized to tarnish the credibility of American conservatives. "I don't believe for one minute that it had to do with Trump's cause at all." 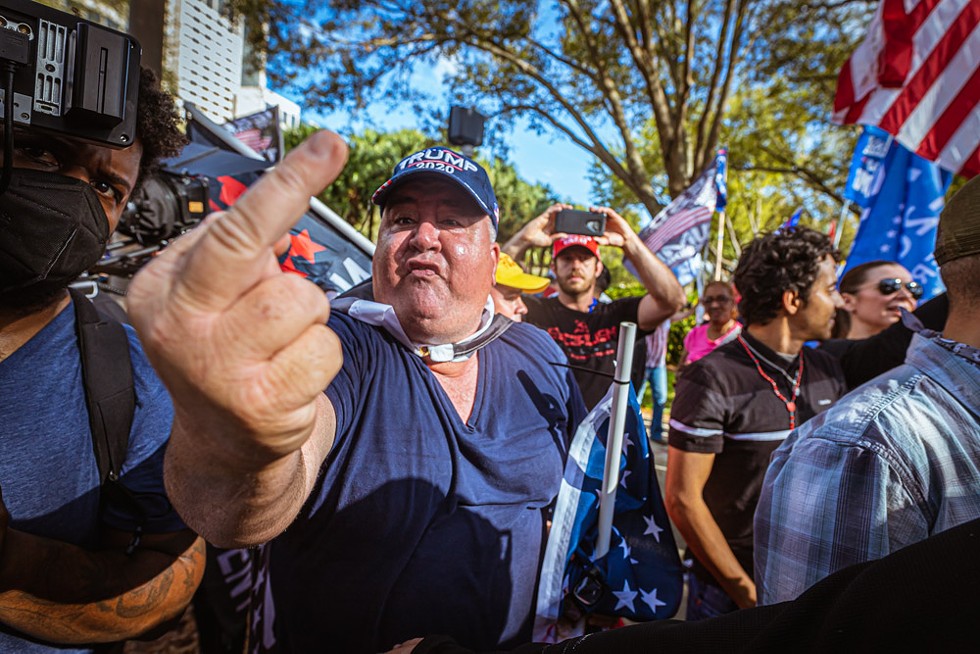 When asked whether he believed law enforcement was in cahoots with Antifa — that is, why the Capitol police might be more likely to let a group of antifascists storm the Capitol than right-wingers — Todd paused. "I think ... I don't think they [the police] knew what to do."

A young woman from St. Petersburg, Florida, who asked not to be identified, also didn't immediately name Donald Trump as her motivation for attending the MAGA festivities, similar to Todd. "I'm here for freedom," she told Orlando Weekly, wielding a sizable "Babies Lives Matter" flag.

Sharing her experience as a Venezuelan immigrant, she stated simply, "I don't want to live in a socialist country," citing government corruption, a robust social welfare state, and the right to have an abortion as antithetical to her vision for a strong, capitalist country.

Unlike a sizable portion of the Trump-supporting crowd who continue to refute the loss of Donald Trump to President Biden, the young woman conceded that Biden "had won" the election. Still, she maintained her belief that the election "was stolen" and she was doubtful of the credibility of the votes that solidified Biden's 2020 victory.

This doubt of a fair election process was echoed by Trump himself in his speech at CPAC Sunday evening, as he repeated the erroneous claim that the United States has a "very sick and corrupt electoral process." He expressed support for the 253 bills and counting that have been introduced across the country that could restrict voting access if passed, consoling the crowd that the Republican Party would "be victorious" in future elections, with America "stronger and greater than ever before."

Across the street from the MAGA jubilee on both Saturday and Sunday, a small group of peaceful protesters set up their own demonstration on International Drive, holding signs with phrases such as "Fash Not Welcome" and "Half a million dead: When will you care?"

Predictably, the group — a visible minority compared to the pro-Trump crowd — became the target of right-wing ire. The group got into several scuffles with right-wing personalities over the course of the sweltering Florida afternoon. Hippie Malone, a protester who faced off with much of their opposition, told Orlando Weekly he was there to oppose the impending threat of fascism in the United States — exemplified and bolstered by Trump's crowd of supporters. 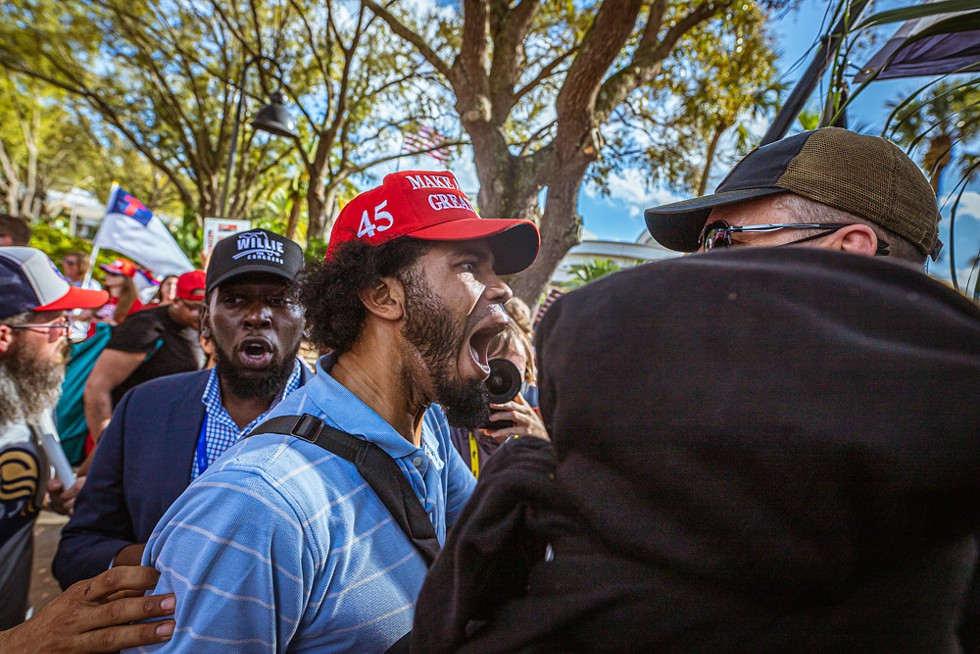 Although he wouldn't specify any organizational affiliation, Malone denied right-wingers' claims that he was there on behalf of "Antifa" or Black Lives Matter, saying instead that he works with an unspecified local group that is focused on meeting the needs of oppressed racial minorities — specifically Black, Latino and Asian communities.

"We're focused on their liberation so they actually have an equal fighting chance in our American system," he said, invoking the name of Black Panther Party chairman Fred Hampton as inspiration for the kind of community-based work he strives to be involved with locally.

Zac, a high school student in Central Florida who also came out to join protesting efforts, shared his revulsion with the debacle of CPAC and the continued idolization of Donald Trump. "I think it's sad that these people have held onto this icon of pure disgust and greed," he told Orlando Weekly. "Like, the epitome of the capitalist system is this asshole, who's known for being a rich asshole."

The anti-CPAC protesters did not have a quiet afternoon. Enrique Tarrio, an FBI informant and chairman of the far-right, nationalist, male-only organization the Proud Boys, strolled across the street at one point to face off with the protesters — one of whom wielded a large "Black Lives Matter" flag, not dissimilar to the one Tarrio set aflame last December in Washington, D.C.

But, despite the palpable tension, Tarrio didn't escalate matters beyond verbal aggression. Mostly, he just stood in front of the protesters, ignored their jibes, and traded snide remarks with maskless MAGA folks — including a group of Black men wearing "Blacks for Trump" shirts who crossed the street to snag photos and shake hands with the neo-fascist leader. 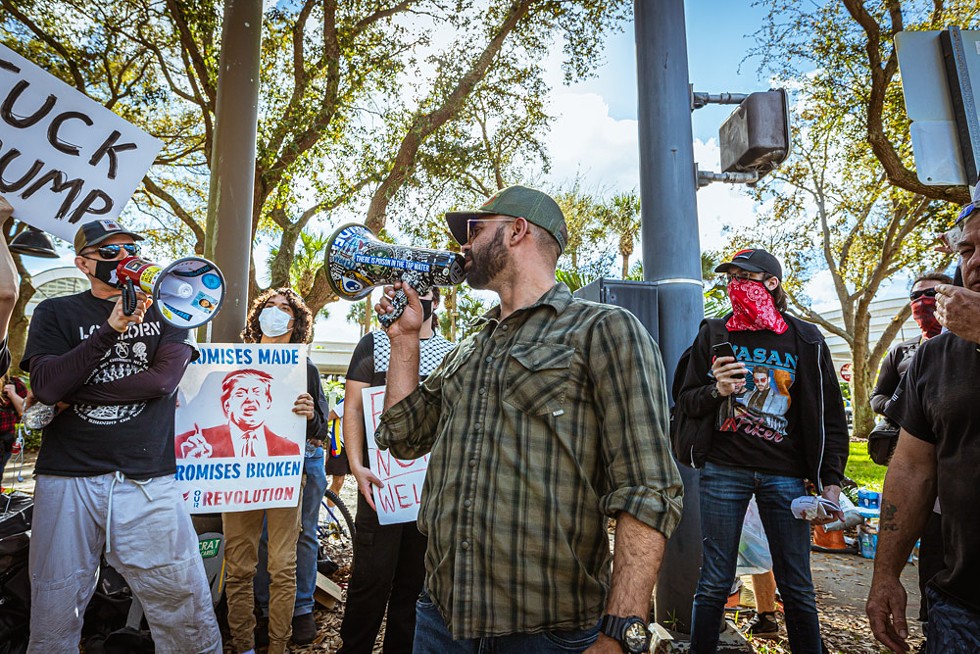 A photo op for the unapologetic extremist, if nothing else. Tarrio didn't seem keen on getting arrested — again.

In an effort to combat the MAGA crowd's indifferent attitude, if not explicit disbelief, toward the deadly coronavirus, the peaceful CPAC protesters also set up fake body bags early Sunday afternoon, to illustrate the half-million people in the United States who have died due to the coronavirus in the last year.

Fake news, if you asked the maskless Trump supporters, but a devastating reality for the individuals and families affected by this inconceivable number of American deaths. In Florida alone, more than 30,000 people have died due to the coronavirus.

But hey, whatever's necessary to ensure the Republican-controlled state remains what Florida Gov. Ron DeSantis described as an "oasis of freedom" to the CPAC audience on Friday, referring to the state's loose restrictions on public gatherings.

Orange County, however, where the conference was held, currently has a mask mandate in place. And although the Hyatt Regency issued repeated reminders for attendees to wear a mask while on the premises, adherence to this mandate was spotty at best. When conference organizers tried to issue a gentle reminder of the mandate to attendees early on, they were roundly booed.

And if the desire to sidestep politically inconvenient public safety warnings isn't indicative enough of the nature of the event, this year's lineup of conservative speakers — featuring MAGA favorites such as Rep. Matt Gaetz, Sen. Josh Hawley of Missouri and former U.S. president Donald Trump — sure was.

About a month prior to the scheduled five-day event, Politico painted a picture of a conference in disarray: unconfirmed speakers, radio silence from former sponsors, and even confusion from one sponsor, Gerrit Lansing of the GOP fundraising platform WinRed, who told Politico in a text message, "I didn't even know they were having a CPAC this year."

Trump, the conference's headliner, was confirmed to make an appearance at the conference only about a week prior to the event. Although he's made appearances at CPAC since 2011, his recent loss to Democratic President Joe Biden marked this as his first CPAC appearance as a former U.S. president officially #canceled by democracy.

The appearance was also notable as his first post-White House speech, although his popularity among the conference-goers was mixed: In a Sunday straw poll that asked attendees whether they would vote for Trump in the 2024 presidential nominating race, 55 percent said yes. About two-thirds of poll participants said he should run again during the next general election cycle.

This was technically a "win," as he led the vote among the other names that were floated — including DeSantis, who trailed behind Trump in second with 21 percent of the straw poll vote, followed by South Dakota Gov. Kristi Noem with 4 percent.

This cancellation of Trump from office in 2020 — #ThanksDemocracy — vibed with the conference's theme this year of "America Uncanceled." Although, like the political promises of the Republican Party, the theme didn't really live up to its namesake.

Days before the conference even began, organizers canceled the scheduled appearance of Young Pharaoh, a hip-hop artist and social media personality who was found to have an extensive history of public anti-Semitic statements.

In the early days of the conference and throughout, political commentators noted what they perceived to be ideological shifts among those who attended the annual conservative conference — bolstering the case that Republicans are experiencing something of a civil war within their party.

Mickey Edwards, a former chairman of CPAC, told CNN on Friday that the gathering was less about discussing conservative policy than bolstering the almighty Trump in a cult-like fashion: "The people at CPAC are living in an alternate reality in which facts don't matter, the Constitution doesn't matter. They have no principle except whatever their leader says."

Political reporter Ben Jacobs of New York magazine wrote that the speeches at this year's CPAC seemed to reflect a shift from the conservative libertarianism of the American right — which was still on display, with grumbling about the conference mask mandate as a leading example — to a more European form of populism embraced by the likes of France's Marine Le Pen.

Most of the speeches, Jacobs wrote, displayed greater concern with hitting on "the type of culture war-red meat that had been a staple of Trumpism," by focusing on the uplifting of Donald Trump and emboldening the culture wars against Big Tech, social justice movements and the foreign influence of countries such as China — while at the same time demonstrating a greater amenability to strains of international far right, with video messages from conservative speakers from Spain, Croatia, Brazil and South Korea.

"The 'does Trump run the GOP' question isn't interesting," tweeted Washington Post political reporter Dave Weigel on Saturday. "He does. What's interesting is how his priorities get incorporated into the dogma [of the Republican Party]."

Among the MAGA crowd outside, it was as if Trump had never left office. Although support for the former president is wavering among Republican politicians — some of whom have jumped ship from the Trump cruise to return to an appeal for conservative values, not loud-mouthed personality cults — for ordinary conservatives, the political salience of Trump's unapologetic bigotry still appears largely unrivaled.