Craving a sugar rush? Look no further than this trio of Orlando sweet shoppes

The injection of Asian popular culture into this city's bloodstream has resulted in a populace yearning for deeper glimpses into its kaleidoscope of whimsical animations; enraptured by its cutely sexy teen pop stars; and thirsting to experience the range of its sweet, milky, multiflavored treats. Boy Kong's fabulous Chinese zodiac mural, emblazoned on the walls of Quickly Boba & Snow, tempts both Asian and Occidentals into this prismatic world. While their nectarous varieties of boba tea, shaved snow, fruit slushies and milk slushies are what many a downtowner gravitate toward here, owner Kimberly Bui's macarons ($2) are gaining as much notice as those sugary-sweet potables. The meringue cookies come in a host of flavors, from pistachio to lavender to caramel, and while I absolutely didn't care for the latter, the rose-lychee macarons were unstoppably addictive. Bui even employs larger, flatter macarons to make ice cream sandwiches. Sadly, the texture and flavors of the tiramisu sandwich ($6.99) I tried left a horrid impression, and unfortunately for us, it was the sole flavor available – we were told that Bui was out, and she doesn't trust any of her staff to make them. (Last month in our Best of Orlando issue, another Orlando Weekly writer awarded Quickly's macaron ice cream sandwich a pick for Best Reimagined Pastry, so I must've just gotten a dud.) 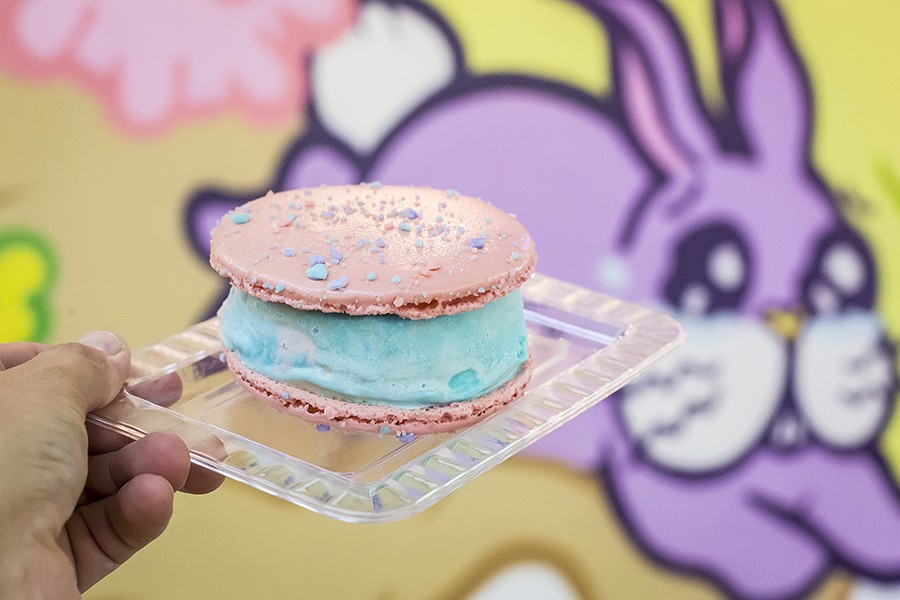 I'll make it a point to return and sample a different flavor, and should it fail to propitiate my palate, I can always relish devouring another Japanese mochi waffle ($3.99). They take about five or 10 minutes to make (not-so-Quickly), but man, these griddled glutinous rice cakes – crispy on the outside, gooey on the inside – are worth it. You can get it topped with a scoop of some crazy-flavored ice cream, but we enjoyed it on its own, simple and sweet.

On the other side of town, a joyful troupe of Koreans is drawing UCF students into the colorfully cavernous confines of Five f(x) by the droves, and not just for remedial calculus. Their primary function (get it?) is to sweeten the teeth and moods of patrons through made-to-order ice creams, taiyaki waffles and a feel-good attitude. Started in Jacksonville as Three f(x), the franchise has since expanded to Five f(x), the Fs standing for "Fresh," "Fruits," "Fun Treats," "Friendly" and, uhh, "Franchise." So it doesn't make a whole lot of sense – neither does the wall hanging of a red double-decker bus on a busy London street. All you need to know is that they hand-fashioned a batch of honeydew ice cream ($4.99) with whole milk in a refrigerated pan right in front of us, and it was stellar. (You can opt for fat-free, almond or soy milk should you wish.) Ice cream flavors run the gamut, with "avocado," "taro" and "spiced chai" being some of the more exotic.

Just as good was the heaping bowl of pricey patbingsu ($14.95), the Korean delicacy of shaved ice topped with fruit, red bean paste, syrups, tteok (glutinous rice cubes) and vanilla ice cream. It's enough to feed a family of four, or one college pothead. The taiyaki waffles aren't like the mochi waffles served at Quickly, but more like your average Belgian waffles – with two notable exceptions: 1) they enclose a filling and 2) they're shaped like fish. Ours was filled with Bavarian cream ($1.95), and it wasn't the least bit fishy. If you need a more convincing reason to visit Five f(x), consider this: The ice cream joint is a "Top Southern Pick" by a respected, bespectacled Food Network personality. (No, not Emily Ellyn – Alton Brown.)

Up the road a ways, in Oviedo, sits Sammy's Gelato & Waffles. By comparison, Sammy's menu is a whole lot simpler and more focused, and its decor far less garish than its Asian dessert-house rivals. It's quite European, at least in the very general sense of the word. Ingredients for their 20-odd gelato flavors are shipped in from Italy ("everything but the sugar," I was told), then crafted in-house. The outcome is impressive, and we devoured every bit of the straciatella, strawberry sorbet and caramel cookie gelato with a rapacious vigor.

The problem lay in the waffles ($5.99), on which the seductive scoops sat. The batter for the griddle cakes is imported from Belgium – which, I suppose, is a good thing. It should yield a slightly sweeter and denser waffle, with a crispy surface. What disappointed us is the fact the waffles weren't freshly made, but rather pre-made and warmed on the iron. What we got were waffles that were soft, doughy, heavy and not the least bit enjoyable. Not sure if it was a matter of laziness or convenience or both on the part of the staff, but when a waffle is presented to you within 30 seconds, with nary the mellifluous waft of baking batter, you know you've been the victim of a Belgian Hoodwink. Limit the waffling here, and stick to the gelato.