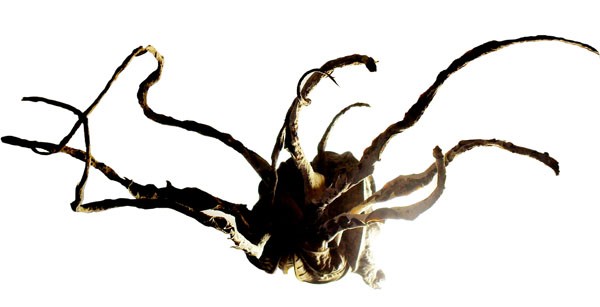 The closures of local art galleries - such as Neon Forest, which shuttered at the beginning of this month - do not necessarily portend the death of art in this city. Now the local art world is busy reinventing itself inside area businesses.

Twelve21 Gallery, for instance, is an art venue that shares space with creative agency Laughing Samurai; it's worth stopping in if one doesn't mind viewing art amidst branding and graphic design efforts going on around the workspace. Right now, the show that's up is Desiccation featuring the work of local conceptual artist Doug Rhodehamel, who took bits and pieces of dried twigs, leaves, and other organic detritus he found at Harry P. Leu Gardens, and fashioned the stuff into the forms of various sea creatures. Rhodehamel's installations are often playful, always ephemeral. Things get a bit more weighty in this show, suggesting a new, more serious direction for the artist.

With museum-like precision, he displays the bodies of his faux desiccated sea creatures, carefully labeled and mounted inside dark-stained boxes. The Smithsonian spoof, complete with genus and species names, is clever, and each creature quickly reveals itself to be composed of local grasses, leaf husks, branches and seed pods.

Each piece is painted with a bit of acrylic to accentuate its shapes or tinge its earthen colors, and they radiate a beautiful, organic  essence reminiscent of their natural forms. In a way, they're so far removed from their environments that they seem to take on a new fictional life as specimens plucked from a desertified universe. The larger creations - such as the "Spiny Gar" and "Parrot Eel" - have an elegiac grace about them; the stray bits of palm fronds and grapefruit trees fit together with an eye for proportion, scale and even the proper droop of the tail of the fish they represent. The smaller pieces, such as the "Bumblebee Squid" made of pignut hickory, Southern live oak leaves, acorn caps and lemon hibiscus seed pods, are rendered in an affectionate, humorous way, as if to lighten the relatively somber mood of the show.

Rhodehamel's work has always been cool and a bit creepy, whimsical but sophisticated. With this show, he seems to have arrived at a heavier place where many artists work today - a space preoccupied with death and transformation, shifts in our culture, climate and economy. It's tough to say where this path will take him, but we'll certainly be watching to see where he ends up.