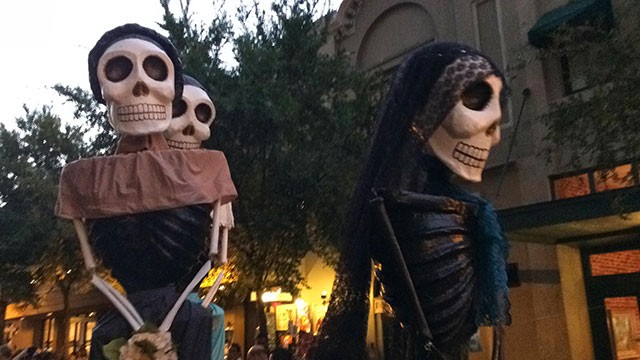 It seems like wherever I turn this month, I’ve been confronted by menacing muppets. I’m no stranger to the puppet world, having stage-managed my share of parading manatees and musical aliens, but even I’ve been overwhelmed by the volume of scary dummies I’ve encountered this season. It started in September, with the werewolf puppets that are the stars of American Werewolf in London, the top maze at Universal’s Halloween Horror Nights XXIII, and continued with some stunning synthetic frighteners at Shallow Grave and the other independent haunts I reported on in last week’s Live Active Cultures column.

The puppet-stalking continued last Thursday on Pine Street, as I arrived for CityArts Factory’s Monster Factory exhibit and Dia de los Muertos street party just in time to face a phalanx of towering skeletons parading down the street, followed closely by an undead accordionist and members of the fire-breathing Phantasmagoria storytelling troupe, who have been known to play with a puppet or two. (Disclosure: I’m a co-producer/director of that show.) This annual Halloween event, which was organized by Denna Beena’s Pink Hair Productions, has become my favorite Third Thursday art event of the year, because the food-and-facepaint festivities impart a unique energy and demographic to downtown’s monthly gallery hop, and a unifying (and edgier-than-usual) theme to CityArts’ numerous display areas.

Those aforementioned enormous skeletal mojiganga puppets, as well as the lively Latin ensemble that accompanied their appearance, are the handiwork of musician-artist Katya Graham of local independent label Tacatantán Records. When not appearing on Pine or the temporary outdoor stage that closed the street to traffic, Graham’s puppets made appropriate guardians to Carolina “the Doodler” Suarez-Garcia’s elaborate Day of the Dead shrine, which filled CityArts’ farthest corner gallery with a fascinating gathering of sweets, snapshots, sugar skulls (sculpted by participants in a recent workshop) and Sutter Home wine, displayed in a neotraditional offering to ancestors.

Finally, I finished off my weekend at the 2013 Orlando Film Festival, which was also invaded by – you guessed it – freaky puppets. Bad Chicken, the first independent feature film from writer-director Carter Mays, may just be the most messed-up puppet spectacle I’ve seen this month, and that’s really saying something. Before I go any further, go to YouTube and search for “bad chicken trailer.” (I’ll wait while you watch it. And now I’ll wait a little longer while you recover.)

This reality TV-skewering saga of oversexed, sociopathic poultry, which won Best Comedy Film at April’s Independent Filmmakers Showcase film fest, was shot in California but has deep Orlando roots: Mays is a Central Florida native, and the film’s puppet stars are performed by locals “Davey Rocker” Schweizer and David “Wavy Davy” Jordan. I’ve worked with both Schweizer (who also wrote the film’s Ennio Morricone-influenced score) and Jordan (builder of the movie’s multiple puppets) on family-friendly projects through Heather Henson’s Ibex Puppetry, so it’s interesting, if a bit unnerving, to see their personal aesthetics engaged in decidedly adult-only entertainment.

I caught up with the trio, along with puppeteer/props designer Joseph Lallement, during a penthouse pre-party before the film’s local premiere last Sunday at downtown’s Cobb Plaza Cinema Café. Though all are current or former Orlandoans, the spark for this film didn’t ignite until they were all in L.A., when Rocker’s concept for a “surly chicken TV crew” was wedded to Mays’ experience writing and producing “unscripted” shows like Bob Saget’s Strange Days on A&E. May’s observations on the “power exchange” between wannabe celebrities and the “people who have the camera and use it like a gun” informed the surreal scenario about an unstable couple (Isabelle Gardo, Michael Palaniuk) exploited by unscrupulous Avid-editing avians.

Bad Chicken may not get a wide theatrical release, but they’ve already got sequel scripts in the works and have partnered with Gravitas Ventures for distribution via Netflix and iTunes next January – so the puppet perversity can continue in the privacy of your home well into the new year.