Crowded House: Five Orlando music scenes that know how to pack them in

by Ashley Belanger and Bao Le-Huu

All photos by Jen Cray

If you've ever been to A Comic Shop in Winter Park, you know it's a warp like walking into a cult '90s movie (if only High Fidelity took place in the Batcave). There's always a snappy heated conversation you pass through to peruse the quaint but smartly curated shop, and while the debate will have plenty of tension, there's the underlying warmth of friendship and carefully guarded mutual respect that keeps nerd dialogues all over the world humming. It's not just a store, it's a conversation starter. From good conversations come lasting friendships and, in a motivated environment like A Comic Shop, true community.

Orlando's nerdy music scene was basically born out of that cultural incubator when the now-defunct Nerdapalooza started hosting concerts in the parking lot of A Comic Shop. When that festival outgrew the lot, they kept A Comic Shop involved by throwing pre-parties and after-parties there. Then when that culture became persistent, the Geek Easy was a born – a major store expansion that features a prominent stage in a pop-culture-splashed bonus room where they recently updated the PA system and lighting to continue upping their music game. Later, when Orlando Nerd Fest debuted in 2014, they hosted free weekly shows leading up to the fest at the Geek Easy, and even made it a hub where people could catch a bus to get to the Convention Center safely and with no hassle to attend the massive nerdy music festival. It'd be drastic to say there'd be no nerdy scene without A Comic Shop and its spawn the Geek Easy, but it certainly played a significant role in its rampant growth.

"They've always been heavily ingrained in the nerdy scene in general," says James Dechert, who runs sound for the Geek Easy and works closely with promoters to book shows. "The patrons and staff of A Comic Shop pretty much built the nerdy scene around here. And then from that, the Geek Easy was built. That's the bar, video game, hang-out aspect. I believe their goal is just to create a place for nerds to come together, find each other, hang out and share interests."

With a monthly open mic hosted by beloved local songwriter Marc With a C, blow-out parties fueled by the unique mania of bands like Random Encounter, and cosplay-inspiring DJ nights helmed by standout spinners like Benjamin Briggs and Sam Harris, music has seeped in to become as dominant an interest of the scene as the campy movie marathons and epic trivia nights that likewise draw crowds to the Geek Easy. Their active calendar has begun attracting outsiders who eye the Geek Easy more as a legitimate venue option for acts not necessarily tacked to the nerdy lifestyle.

"I assume you know about EyeQ," Dechert says. "He's a pretty big local nerdcore rapper. He's been trying to act as a bridge between nerdcore and local hip-hop. He's thrown a couple really big hip-hop shows with the Geek Easy that ended up with really stacked lineups, like E-Turn and DiVinci, people I wouldn't expect to see at the Geek Easy. I'm really glad it's being treated like an actual venue." 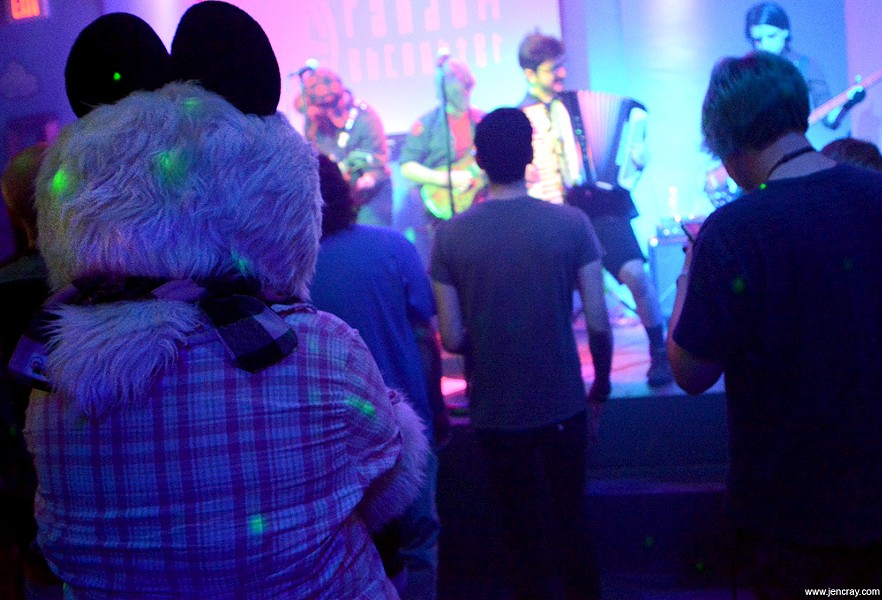 Sometimes a room becomes more than a room, due to the devoted folks who fill it up. That's what's happened at the Geek Easy, where a diverse event schedule helps attract new crowds to concerts they might otherwise never discover.

"If you're trying to foster a community, it can't all just be music, because there's plenty of other ways to connect, build friendships and all of that," Dechert says. "Not everyone is a diehard music fan. A lot of times people end up at karaoke there or something, and they're like, 'Oh, I'm gonna check this other event out,' and then tap into the music side of it." – Ashley Belanger

Heard at the Geek Easy