Crowded House: Five Orlando music scenes that know how to pack them in

by Ashley Belanger and Bao Le-Huu

All photos by Jen Cray

Back in the mid-'90s when Park Ave CDs was still actually on Park Avenue in Winter Park, the store was almost entirely staffed by Rollins College WPRK DJs. This created a curious bond between the music playing on the air of the college radio station and on the albums moving through the CD and vinyl store. Although this permeating force (which eventually shifted Orlando's music scene markedly) didn't yet have a name, their work was quietly furthered when they started booking edgy concerts around a loud man who became a major game changer in Orlando's music scene: Sam Rivers.

"He was a catalyst," says Matt Gorney, founding member of the local collective the Civic Minded 5 and music history teacher at Full Sail University. "And people who were punk rock musicians and people who were electronic musicians and DJs started being affected by this Sam Rivers effect. It was starting to affect the way they were making music, listening to music and being open-minded toward other things. And that period, that mid-'90s period, WPRK was very adventurous. ... All of this stuff started to be really affected by Sam. So that sort of laid the bed for Civic Minded 5. " 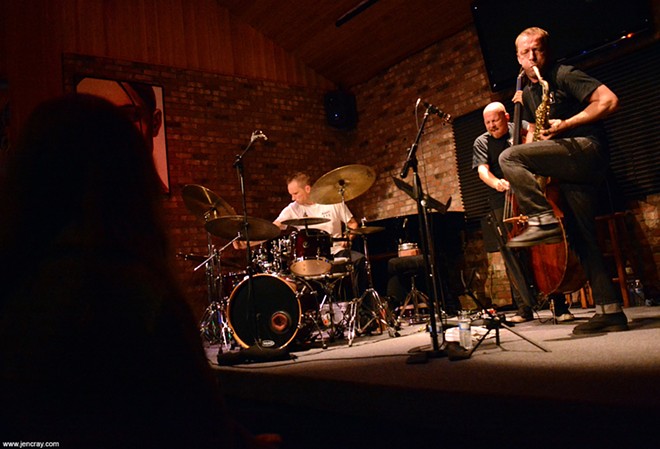 The Civic Minded 5 started out booking shows at Rollins College in 1996, with ample support from the school to fund and host their inventive concert programs. You'd think drawing an invested crowd to a private college chapel to see a jazz concert (Friday night!!) might not be at the top of every '90s college kid's to-do list, but once Rivers' music began to catch on with a mainstream audience after a fateful show at what is now the Social with Phat-N-Jazzy, his measurable pull reliably drew a varied audience seeking to soak in his wild artistry (especially after he formed his trio with an insanely solid rhythm section in drummer Anthony Cole and bassist Doug Mathews).

"Sam Rivers had the biggest nights at the Sapphire Supper Club," Gorney says. "They were our biggest nights, and it just became this thing that people came to, and it started having this broad impact on people who were not even jazz musicians but were starting to see what he was doing in the amount of energy that was involved."

"All the hippies would be dancing to his music like it was a Dead show," laughs Civic Minded 5 member and Gallery at Avalon Island director Pat Greene, describing the '90s scene in Melbourne at the Lazy Bean, where Rivers' Florida career first broke.

Jokes aside, energy is why you go to a Civic Minded 5 show. The collective draws on a wide pool of diehard music fans who travel the world in chase of unusual minds bending their instruments to create constant surprise by resisting predictable songwriting. These artists exist in genres loosely labeled like free jazz (The Thing, Peter Brötzmann) or avant-garde (Mary Halvorson, Zs) or experimental (Sun Araw, Bill Orcutt), but they extend the definition of music by their existence. After a certain point, the Civic Minded 5 realized they could do much more locally if they became a self-subsisting booking entity.

"We just started to realize we weren't going to be able to keep going back to the well and asking for a check and asking, 'Can you get us a room?'" Gorney says. "So we decided to be a little more autonomous, like WPRK will still be a sponsor of this, but we'll kind of take this into our hands. And our friend Pete Barber was the DJ of 'The World Music Show,' and he said, 'We should just pool money together and sort of be this socialist collective type thing.' And at first I was like, 'I don't know if that's too many cooks in the kitchen. I don't know if it'll work.'"

It worked too well, and Gorney says after they booked one band (who leaked to others that they were paid a living wage and played to a decent crowd), emails started clawing at the Civic Minded 5's concert calendar from so many performers seeking dates. So much so Gorney likens the experience to being bombarded by stray cats. And so the collective needed a name. The one they took is kind of misleading. Even if you're a fan of the short-lived cartoon The Tick. 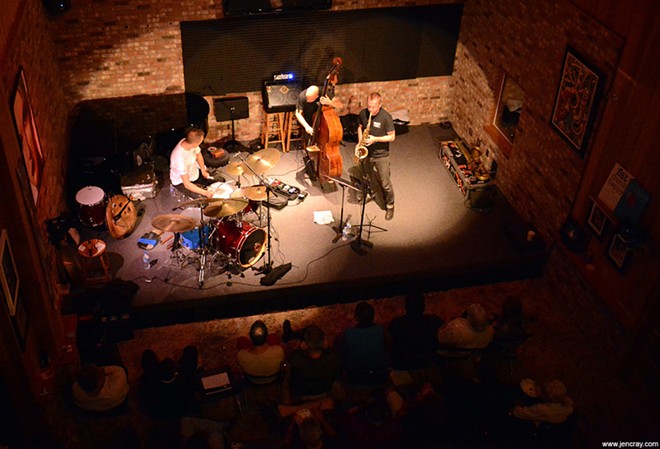 "Do you know about The Tick?" Gorney says. "Well, there's a really shitty superhero collective called the Civic Minded 5, and they really sucked. They were not effective at all. One was Mucilage Man, he always had shit stuck to him. And again, it's Pete Barber. We were joking about, like, 'We're the Civic Minded 5!' because we had been watching The Tick."

The collective is more than five people, and to join requires regular dues. Most of the shows the Civic Minded 5 books are free to the audience but funded by the collective, the community that supports them and earned grants. Audiophiles completely, they heavily consider the room before booking their shows at unconventional venues like Timucua White House, intimate spaces like Gallery at Avalon Island or traditional clubs like Will's Pub. Their mission is to uncover the world's most intriguing musical minds and import them to showcase here in Orlando, appreciating freak streaks and true genius you can't find just anywhere, and you certainly otherwise wouldn't encounter here.

"We would book our vacations and go to New York or wherever," Gorney says. "Just go for a week and go see shows every night or go to a festival and just see 20 concerts. So being able to do that here was just way cooler. Because you think, well, we're going to spend money on this, let's have it here and just essentially throw a party for our friends." – Ashley Belanger

Jazz legend Sam Rivers first came to Orlando in the mid-'90s to perform a single date with Dizzy Gillespie, at a time when he was based out of New Jersey, in his early '70s and tiring of the winters. He thought Orlando seemed nice, and an opportunistic showgoer that very night enticed Rivers to relocate, offering him a turnkey big band comprised of professional musicians farmed from the theme parks. They basically shook hands on it then and there. Rivers moved south, and Orlando moved closer to a rich music movement that extended through the early 2000s.

Rivers died in 2011, and it shook fans and local musicians with the same jolting force experienced when he bolted onto the scene. While he is unmistakably still missed – his radical stage presence was true to his wild nature – his music lives on the last Wednesday of every month when Will's Pub hosts the New Sam Rivers' Rivbea Orchestra. It's Rivers' former band (a polished 16-piece orchestra) performing Rivers' music under the direction of Doug Mathews, who was a core part of the Sam Rivers Trio. (FYI: The last Will's performance of 2015 will be next month.) If you've never seen the orchestra fill out the pub, it's a surreal blast from Orlando's recent past that ranks among the best regular offerings in our music scene.