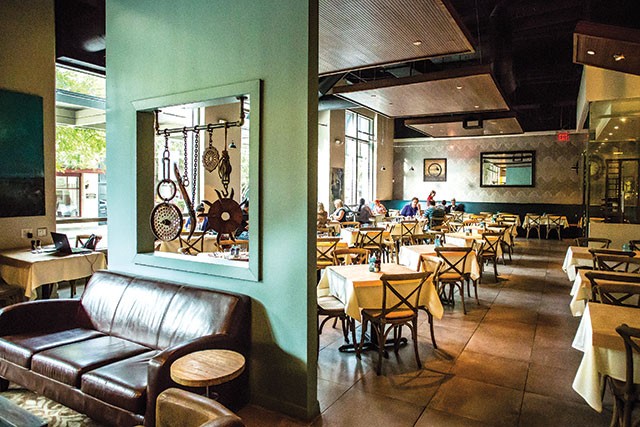 It’s been great to see the maturation and steady improvement of downtown’s dining scene over the past few years, with chef-driven, food-first restos establishing a foothold along the Orange Avenue periphery. The Rusty Spoon’s Kathleen Blake has been a major player, even though folks have been lamenting the loss of her Pine 22 burger bar for quite a while now. Enter Scott Copeland: The former executive chef of Antonio’s La Fiamma (and previous sous-chef at K Restaurant) is making every effort to console those mournful souls. He’s moved into Blake’s old space (which was, before that, Louis Huang’s Black Olive Restaurant) to helm Artisan’s Table – arguably downtown Orlando’s most innovative restaurant.

Well, at least in terms of food, anyway. The decor is yet another rehash of the Black Olive’s original design – this time, it’s been given a sort-of rustic-industrial look that comes off looking more scattered than modern. No matter, the interior soon became as much an afterthought as the mirthless greeting we received at the hostess stand, for it was Copeland’s creative culinary renditions and our impeccably polite server that made the greatest impressions.

Artisan’s Table was taking part in Orlando Weekly’s monthlong prix-fixe Bite30 celebration (bite30.com), but our intent was to order off the regular menu. Still, seeing the word “poutine” ($6) printed on the special Bite30 menu necessitated an order of this now trendy starter, and our server happily made the concession for us. Copeland adds a decidedly Southern twist to this Canadian classic and I, proud hoser that I am, wasn’t displeased by his interpretation. Tater tots maintained their crispness, even under a weighty layering of cheese curds and duck-confit gravy. If there’s a dish worthy of permanence on their everyday menu – a menu that changes regularly, I should add – it’s this one.

Another consideration: sweet and spicy fried drumsticks ($8) peppered with togorashi, then artistically positioned in a bowl with Japanese sticky rice and Szechuan-pickled mango. Vegetarians will appreciate the Korean vegetable pancakes ($7). Flavor-wise, they’re somewhat one-dimensional, but the hotcakes come alive when dipped in sweet sesame-soy sauce and forked up with a little kimchi salad. After that, the long wait for the arrival of our mains didn’t bother us too much – it just allowed us to savor a round of stiff cocktails including the bar’s apricot Sidecar ($8) and Black Beauty ($10), a pisco sour variant.

Skate isn’t a common seafood item on menus, given its reputation as a “trash fish,” but Copeland’s pan-seared skate Grenobloise ($19) encompassed the requisite brown butter, capers and lemon of the traditional French Alpine cooking style. If there was a fault, the dish went a bit overboard with the butter, but the sweet-tasting flesh of the Gulf ray was perfectly cooked, and a parsnip purée lent it some added depth. Braised short ribs ($20) might be a common dish, but this plate of pleasurable succulence was given added comfort with a base of creamed corn blended with pecanwood-smoked bacon. The meaty slab was topped off with a ruffle of fried Vidalia onions.

For dessert, the affogato selection was intriguing, but we settled on an artery-clotting “kronut” ($7) served over a coffee-caramel sauce and a blueberry crisp ($7) with a Chinese five-spice crumble. With Artisan’s Table, it seems Copeland is making a concerted effort to add his unique fingerprint to the city’s dining canvas, and given what we sampled, I’d expect additional strokes of fancy in future visits.