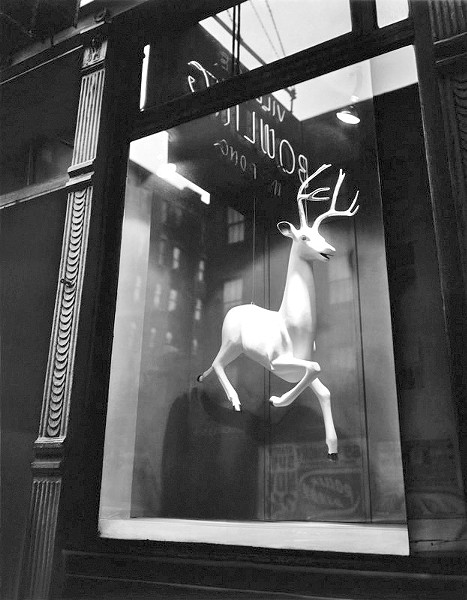 Berenice Abbott met Eugène Atget in 1925, when he was 68 and she was just 27. At the time she was working for celebrated surrealist Man Ray, but in Atget’s photographs she found the inspiration for her life’s work, saying, “Their impact was immediate and tremendous. There was a sudden flash of recognition – the shock of realism unadorned.”

Atget wanted to preserve a record of the medieval Paris being torn down to make way for modern streets and sewers, a sweeping municipal renovation that began in 1852. That architectural chronicle inspired Abbott to begin work on Changing New York, a project that consumed her for a decade.

While Abbott’s work is purely documentary, unflinching and head-on, Atget’s has an almost ethereal quality. Though he too was documenting a city he saw on the verge of disappearing, his pictures seem to capture it in the very moment of vanishing, ghostly and shimmering and infused with Paris’ soul. Abbott’s photos of New York are grimy and industrial, with no attempt to hide the dirt in the corners (rather, to flaunt it). But her later images occasionally portray a glowing and idealized New York (as in “Designer’s Window,” above) perhaps recapturing a time when she was still under the spell of Paris and Atget.

This exhibition, on loan from Syracuse University, hangs through May 2; the opening reception takes place at 6 p.m. Friday, March 2.