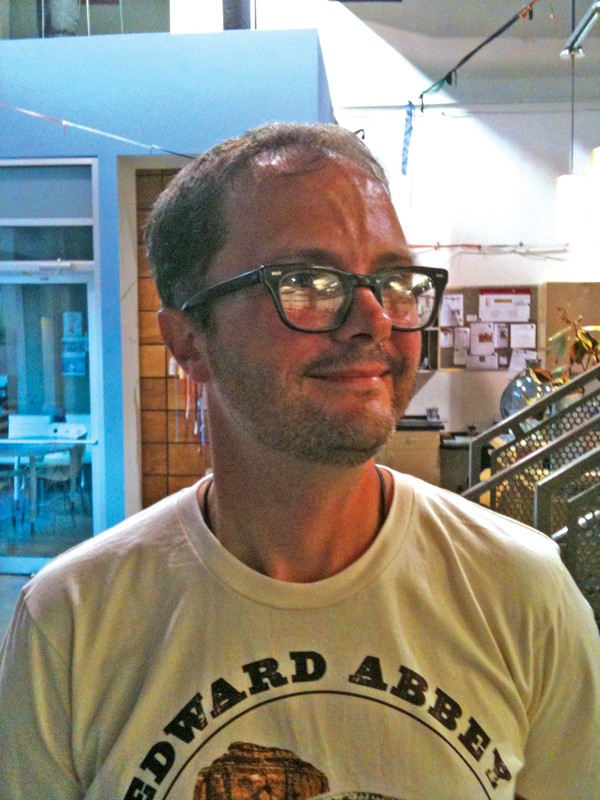 On the eve of our most martial national holiday, fewer than 20 people gathered at Urban ReThink to hear Garry W. Shores read from his New York Times-published journal entries. Shores, a trauma nurse and Navy lieutenant, left his home in Knoxville, Tenn., to serve for six months in Kandahar, Afghanistan. Shores read an excerpt from “A Very Different Day in a Very Different Kandahar Hospital,” published at the end of 2010 on the NYT blog At War: Notes From the Front Lines. More stories from his deployment can be found at talltalesfromsouthwestasia.blogspot.com.

Shores says writing helped him decompress from the experience of being in Afghanistan: “[You] write it down and it’s like, then it’s just filed away.” Though he was part of the “humanitarian effort … the whole hearts-and-minds plan” rather than fighting, serving as a trauma nurse in the age of improvised explosive de-vices is a horror show. Shores, an affable storyteller who scrupulously avoided politics in this presentation, fell short of words when attempting to describe the effects of blast waves on the human bodies he spent his tour attempting to repair.

More cheerful was the camo fashion show. Between reading from the Kandahar piece and a story from Shores’ zine, the South Knoxville Illuminated Gazetteer, Urban ReThink volunteers modeled items from Shores’ collection of military camouflage while he discussed the provenance of each piece (lizard pattern, duck-hunter, brushstroke). Also illustrative was the slide show, which included pictures of the military base, MREs and camels in a corral, yes, but also Southern talismans: scenes from a canoe trip on the Tennessee River, buttermilk biscuits in a cast-iron skillet, his prized Ford Bronco.

Shores’ Gazetteer, each issue a staple-bound xeroxed collage, is devoted to colorful, rambling anecdotes of eating barbecue, breaking up bar fights and “tear-assing around the woods.” Poetic odes to kudzu and sinkholes exemplify Shores’ philosophy: “Storytelling in the South is one of the greatest treasures we have.”

Two new spaces are in the soft opening process in Thornton Park this month. Extra Large Gallery (or “XL Gallery”; they seem to be waffling between the two in their branding) is stashed above the Thornton Park bar best known for its burlesque shows, Stardust Lounge, 431 E. Central Blvd. The gallery self-identifies as “lowbrow urban graffiti”; in addition to curated shows, they will sell limited edition prints from lowbrow legends like Ron English, Shag and Shepard Fairey. The first show, Antilogy, is a face-off between local son Patrick Fatica and L.A.-based Banksy-lite Thierry Guetta, aka Mr. Brainwash. The opening is 8 p.m. Saturday, July 23. You may exit through the gift shop.

Also unfolding its wings soon is the Falcon Bar and Gallery, an art/drinking space adjacent to Mother Falcon Clothing, 819 E. Washington St. Mother Falcon’s commitment to local art is unquestionable, but they haven’t had the space to do the work justice until now. The new room will also obviate the need for Dexter’s to set up a cash bar at openings; we have high hopes for cocktails as creative as MF’s business model. One of the first events, currently listed as taking place at Mother Falcon but sure to spill over next door, is Ricky Powell’s World Famous Slide Show. Powell’s backstage pass to the world of ’80s/’90s hip-hop, paired with his fast-talking patter, promise to make this narrated tour through his work an oldskool pleasure.

Though both of these official openings are scheduled for later in the month, you never know – stop by and you might get to scope out the surroundings earlier.